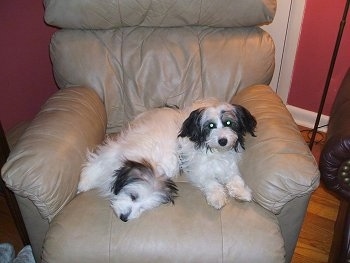 "These are our babies, 4-month-old Jack Russell / Poodles kickin' back on recliner. L-R, Odie (boy) and Molly (sister)" 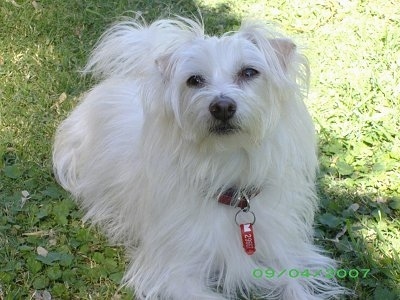 Milo the Jack-A-Poo at 5 years old—"His mother was Jack Russell and father Toy Poodle. The litter had 5 pups, all with different variations of colour and hair length. Milo was the smallest and had the longest hair. He is super intelligent and sometimes I think he trains us, not us training him. He loves de-fluffed tennis balls, and would play all day if we'd let him. At 8pm every night I just say, "Give me your ball" and he'll go and hide it. Clock hits 10.30pm (bedtime) and the ball just appears, and we have to go outside for the final play of the day! See, he's trained us!!" 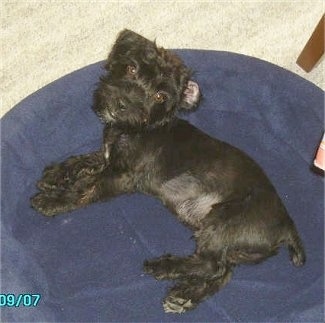 "Bruce, a Jack-a-Poo puppy at 3½ months old relaxing in bed." 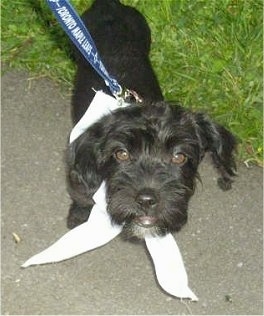 "Bruce the Jack-a-Poo puppy at 3 ½ months old, after he completed his 5km walk to raise money for our local Humane Society." 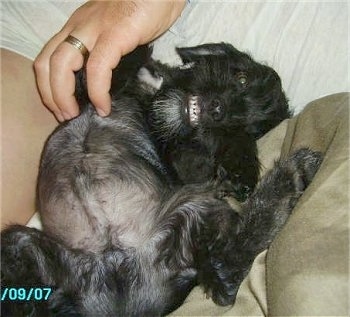 "Bruce the Jack-a-Poo puppy at 3 ½ months old smiling—he loves to show his teeth!" 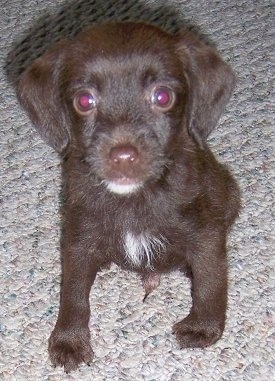 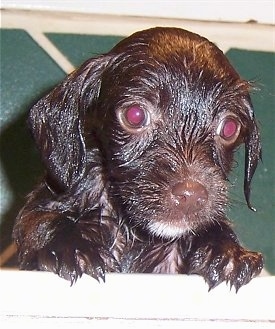 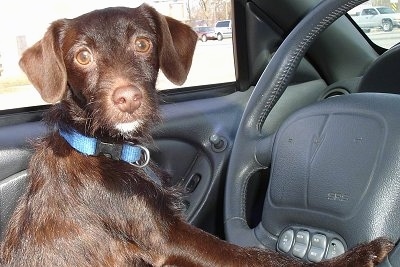 Jago the Jack-A-Poo at 9 months old (Jack Russell / Poodle mix)—"Jago is now a little older and wiser...but still just as rowdy and fun! He has become very confident and hyper, but yet a major lapdog. He always wants to be on someone's lap, foot, arm...whatever he can cozy up to. He loves to play and is quite intelligent. He already knows many tricks, and is on his way to becoming our second "circus dog." He is always walking around on his hindquarters and doing his jump turn...it's just his thing..." 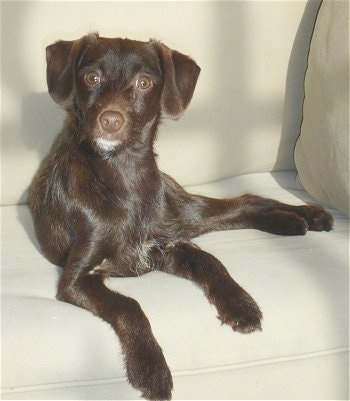 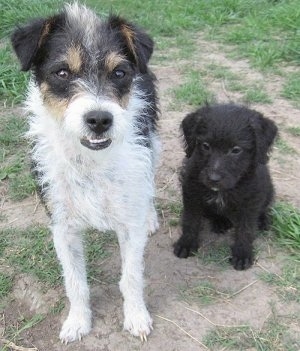 "This is Raz, a one-year-old Jack-a-Poo and her Poodle mix son as a young pup. Raz is half Toy Poodle and half Jack Russell Terrier." 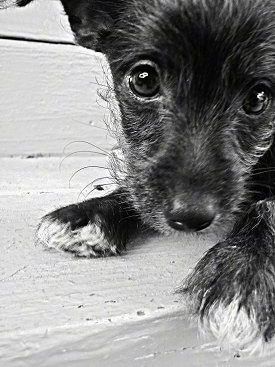 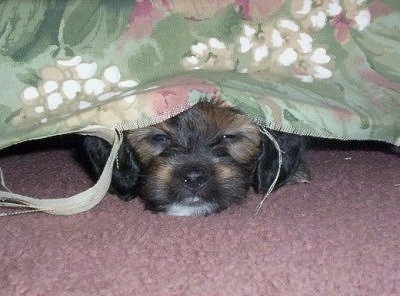 "This is Rocky at 8 weeks old. He's a very playful Jack-A-Poo. He wore himself out tearing up our couch." 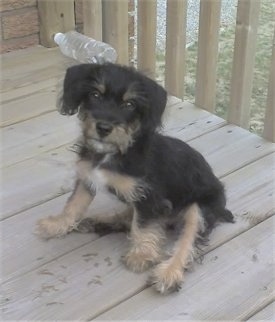 "OReilly, a Jack-A-Poo (Jack Russell / Poodle mix) as a puppy at about 3 months old." 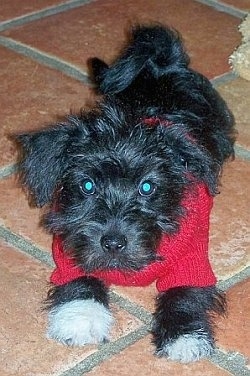 "Lola a Jack-A-Poo puppy at 5 months old—her mom was a purebred Toy Poodle and her dad was a Jack Russell Terrier. She is very smart and loving. She was very easy to train." 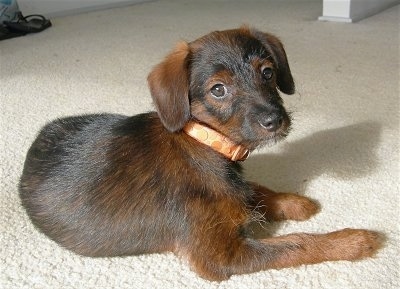 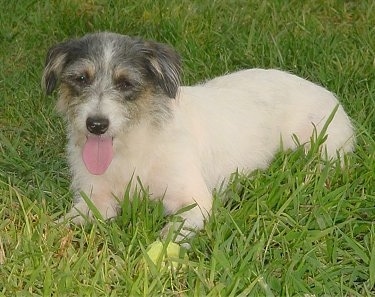 "This is Punkin. She is a Jack-a-poo. Her mother was full-blooded Jack Russell, and her father was full-blooded Toy Poodle. She is very playful and hyper. She loves to run, play catch and get in the water. She also loves to swim and ride on a four-wheeler. She is 9 lbs. and in the pictures she is 1 year old. " 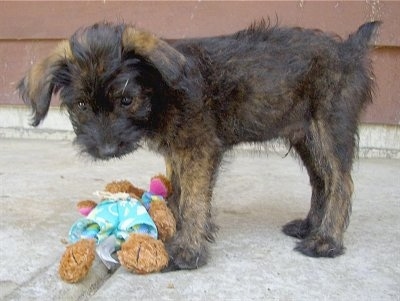 Shown here as a young pup, "Jack is a Jack-A-Poo (who I usually call Jackie-poo). His mom is a brown and white wirehaired Jack Russell Terrier and his dad is a black Miniature Poodle. At 7 months old he was about 13 lbs., and was only 4 lbs. when I got him at 9 weeks old." 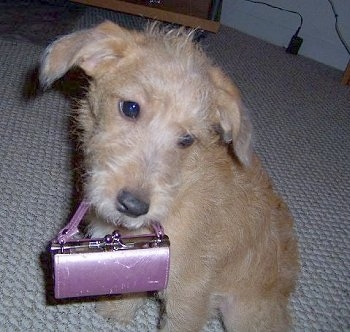 "This is a picture of our puppy Charolette. She is a Jack-A-Poo. She came to live with us when she was 8 weeks old. This picture was taken at 4 months old. She was running around the house with something in her mouth and when I finally figured out what she had, I grabbed my camera and asked her if she wanted to go shopping!" 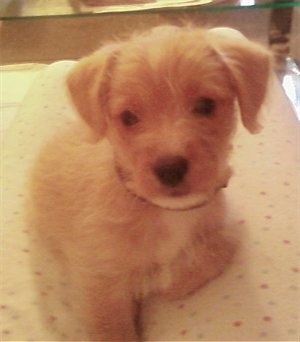 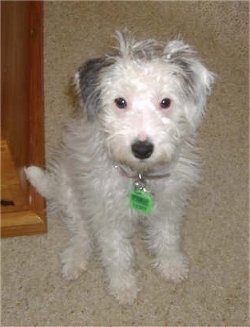 Milly, a Jack-A-Poo puppy at 3 months old—"She is a smart, energetic little puppy who loves to swim, play with water and get into mischief. We got her at Animates (a NZ pet store) at 3 months old, after our old dog (a Shetland Sheepdog purebred) died at the age of 10. Milly loves to play hide-and-seek with her toys and especially likes to bury them in the back garden. She loves to play with children and every one that arrives at the door gets a waggling tail and a bit of a lick as a greeting. She also likes to get into anything she knows she's not allowed. She is black and white, with a wiry coat." 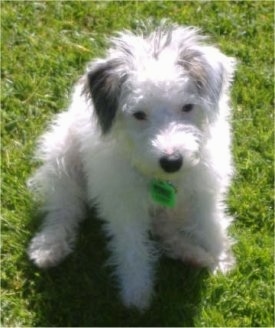 Milly, a Jack-A-Poo (Jack Russell / Poodle mix) as a puppy at 5 months old 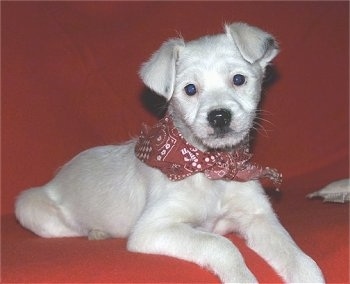