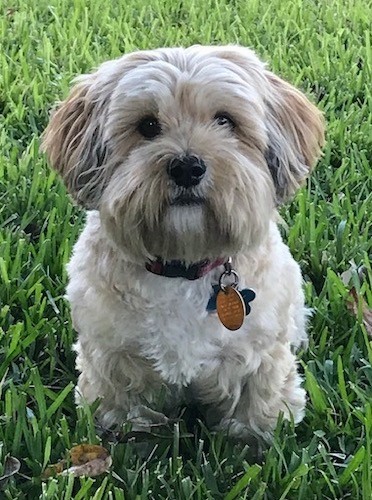 "This is my boy Andy. He is a Lhasa Apso breed dog. He is a rescue dog and it took a couple of years to get him to fully trust I was his forever mom. Everyone who encounters my boy falls in love with him. Children are drawn to him and his tail instantly wags when he meets a dog lover - which he can immediately sense. I hope to have many years of companionship loving and caring for my boy Andy. He gets upset if he does not get a good walk about at least once a day, but prefers a morning and afternoon walk. After his walks he uses his teeth to pull off grass burrs he’s picked up along the way. He chews up these burrs like they are a delicacy!"

The Lhasa Apso is a small, hardy dog. The body length is longer than the height of the dog. The small, deep-set eyes are dark brown and the pendant ears are heavily feathered. The front legs are straight. The back legs are heavily covered in hair. The muzzle is medium in length. The teeth should meet in a level or slightly undershot bite. The feet are round and catlike with an abundance of hair. The tail is set high, well feathered and carried over the back in a screw. Some tails have a kink at the end. The dense, double coat is straight and long over the entire body, including over the head and eyes, reaching to the floor. Any color is acceptable in the show ring. Gold, cream and honey are the most popular, but the coat also comes in dark-grizzle, slate, smoke and multi-colors of brown, white and black. Puppy coats often change colors as the puppy grows. Owners often cut the dogs’ hair short in a puppy cut to make them easier to care for.

This is a hardy dog with a friendly, assertive manner. Intelligent and lively, it makes a good pet. Lhasa Apsos are spirited and devoted little dogs that are affectionate with their masters. They can be very obedient to their masters. This breed responds to motivational training. They have a keen sense of hearing, and make good watchdogs. The Lhasa Apso travels well. Sadly, this little dog often falls into Small Dog Syndrome, a human induced behavior where the dog thinks he is pack leader to humans. This causes many varying degrees of negative behaviors to come out in the dog. They become suspicious of strangers, and may not tolerate children. They will become willful with a loud persistent bark, as they try and get THEIR humans to listen to them. They will become nervous and untrustworthy with strangers and children, and inclined to fight with other dogs. Often times they will develop separation anxiety, getting very upset when left alone. Followers are not allowed to leave the pack leader, however pack leaders can leave the followers. They can become can snappish if surprised or peeved, and begin to display guarding behaviors. These negative behaviors are NOT traits of the Lhasa Apso; they are human induced behaviors resulting from the dog not being treated like the canine species it is, and due to lack of leadership, rules and the lack of limits placed on the dog. A mentally stable dog that gets enough mental and physical exercise will have a totally different personality. It is all up to the humans around the dog. As soon as the humans start being true pack leaders, the dog’s behavior will change for the better.

Generally a very healthy dog. Sometimes they have skin problems if the coat is not kept free of parasites. They do have a slight tendency to get hip dysplasia. Also kidney problems, eye problems such as cherry eye and bleeding ulcers.

These dogs are good for apartment living. They are very active indoors and will do okay without a yard.

Lhasa Apsos need a daily walk. Play will take care of a lot of their exercise needs, however, as with all breeds, play will not fulfill their primal instinct to walk. Dogs that do not get to go on daily walks are more likely to display behavior problems. They will also enjoy a good romp in a safe, open area off lead, such as a large, fenced-in yard.

The long coat parts at the spine and falls straight on either side. No trimming or stripping is needed, although when in full coat, they need to be brushed about once a day to keep their coats from matting. Some owners opt to cut the coats short for easier grooming. Dry shampoo as necessary. Check the feet for matting and for foreign matter stuck there. Clean the eyes and ears meticulously, for they tend to tear. This breed sheds very little.

The Lhasa Apso originated in Tibet in the Himalayan Mountains hundreds of years ago. It's named after the sacred city of Lhasa. For years the breed remained solely bred in Tibet by holy men and nobles. It was used as a watchdog in temples and monasteries. The dog was considered sacred. The belief was that when its master died the master's soul entered the Lhasa Apso's body. The breed was not easy to come across and was hard to buy. The dogs were considered good luck to their owners. In 1933 the dogs spread to other parts of the world thanks to C. Suydam Cutting, who introduced the first Lhasas to the USA as gifts from the 13th Dalai Lama. Tibet's ruler would present them to visiting foreign diplomats. The Lhasa Apso first appeared in Britain in the 1920s and in the USA in 1930. It was first recognized by the AKC in 1935. 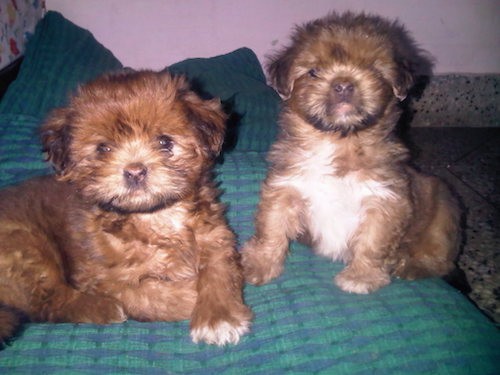 Brandy and Banzo the Lhasa Apso puppies at 6 weeks old.— "Brandy is a little naughty and Banzo is shy." 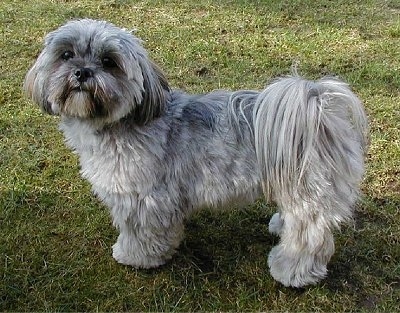 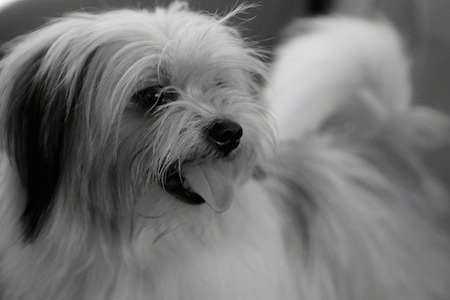 Makita the Lhasa Apso at about 2 years old—"Maki (short for Makita) was given to us by a friend when she was about 6 months old. When she first arrived, she stood aloof from all of us except with my sister Meg who gets to play with Maki whenever she visits our friend. But it was only for a short time, Maki easily got adjusted and became the "darling" of the house : ). She's very territorial and very persistent with her barking especially to strangers. But once she gets familiar with the person, she still barks but occasional. It was only recently that I have watched the program "Dog Whisperer" and I found it to be very helpful in understanding Maki. I now have just started taking my dog out for a walk-the right way : ) We're both still learning and I'm happy spending each moment with Maki knowing I'm doing the right thing -guided by what I learn from the show. Such a nice feeling : )" 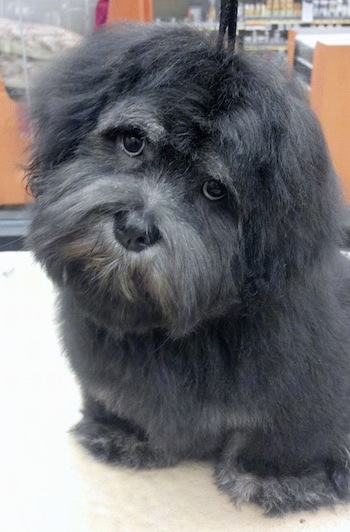 Maximus the Lhasa Apso puppy at 5 months old—"This is Max right after his very first trim. We got him groomed so he could see. He was having a lot of trouble with our stairs!" 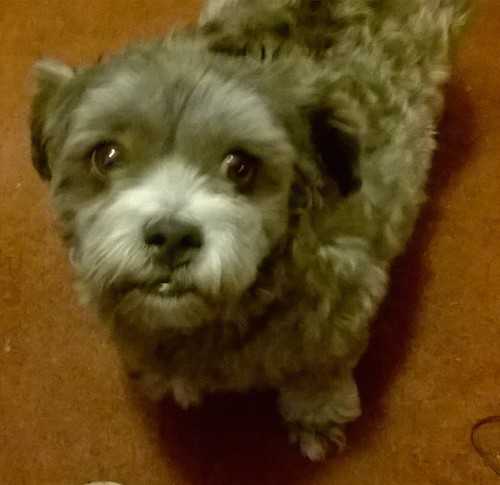 Mercedes the Lhasa Apso at 6 years old—"Mercedes is a loving and sensitive doggie. She loves to be with me but I have to watch her around other people so that they don't take her, cause she is so friendly. She loves to swim and watch TV with me." 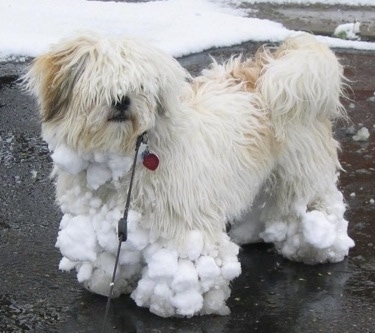 "This is Bailey the purebred Lhasa Apso at 9 months. It's impossible to get him back inside when it's cold, windy and snowing. Extremely affectionate and active, always in motion. Every walk includes a couple ¼-mile all-out sprints. Loves playing fetch then runs the stairs when we're otherwise occupied. He's now 6 years old and still has an extremely athletic physique—skin, bone, and muscle—lots of muscle for a 14-pound dog." 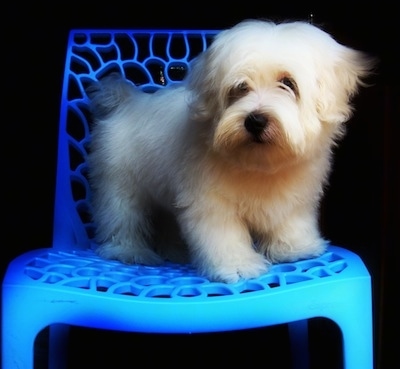 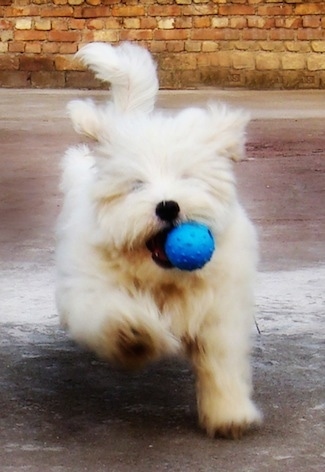 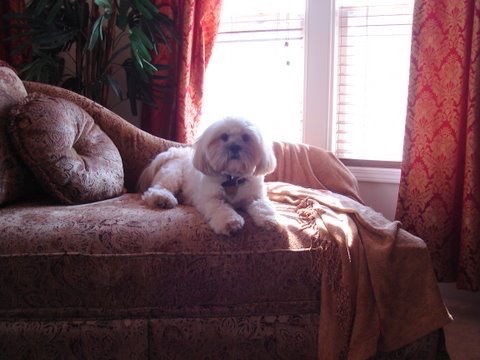 "This is Mido at 7 years old. He is a very calm, loving dog that was adopted from PetFinder. He sometimes acts like a cat!! When we adopted him he was 3 and as he gets older and we get to know him more, we think he was brought up with cats. He licks his paw and then cleans his face. He leaps up on the sofa, from the side, not the front like our other Lhasa Apso. When we go to lift him up he rolls over. He really has some cat-type quirks!! He likes bacon and chicken (what dog doesn't?). He never played with toys for the first year then one day we saw him flicking a furry toy around, since then he loves his toys. Still won’t chase a tennis ball, though! Gets on okay with our other Lhasa Casey; she’s 12 this year. But he doesn't like her too near him, they sleep on the bed but at opposite ends, he doesn't like to be too close to him. I don’t know why? 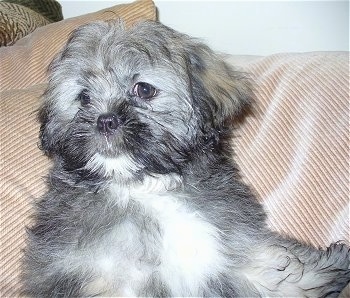