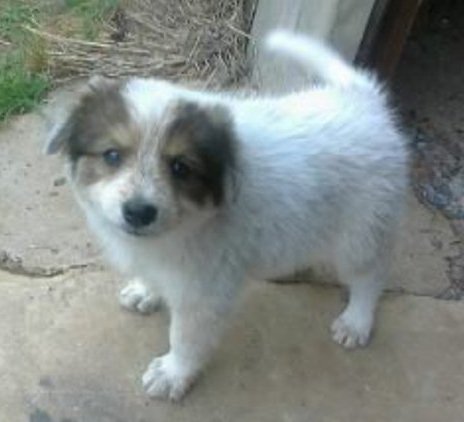 Bella the Maremma Sheepdog / Australian Kelpie mix breed puppy at 2 months old—"When I saw her I fell in love. This not so little, white ball of fluff with red/brown patches over her eyes and what almost look like freckles across her snout. She was the product of my friend's Red Kelpie female dog and his boy dog Smiley, a beautiful all white Maremma Sheep Dog. I had never heard of the breed before. I came across this site looking for information about the Maremma. My gorgeous little girl is half Maremma half Red Kelpie and I called her Bella which is short for Bellisimo which mean beautiful in Italian. And being half Aussie, well we do have a tendency to shorten names. She is quite stubborn and at the moment very clumsy, which makes her very comical to watch. She is also quite gentle and doesn't try to jump up at you when she greets you. She is very affectionate when she wants to be, though can ignore you if she is engrossed with something else. I have found her to be quite smart, when I showed her how to climb up and down a couple of steps (so that she could come and go from my caravan) it only took her one or two attempts to work it out. She has only relieved herself inside my van on her first night with me (at 7 weeks old) and has either let me know when it is time to go outside or has simply held on until I've woken (which is pretty early anyway). She is very very keen on water and loves to dig in the little pond my dad made for her several times a day, to keep herself cool. We are on several hundreds of acres, but for now she has a yard that is an acre to run around in."

The Maremma Kelpie is not a purebred dog. It is a cross between the Australian Kelpie and the Maremma Sheepdog. The best way to determine the temperament of a mixed breed is to look up all breeds in the cross and know you can get any combination of any of the characteristics found in either breed. Not all of these designer hybrid dogs being bred are 50% purebred to 50% purebred. It is very common for breeders to breed multi-generation crosses. 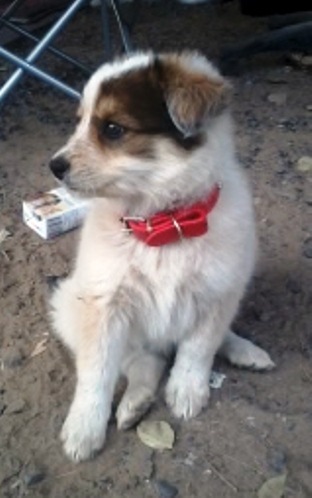 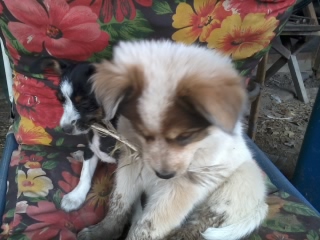