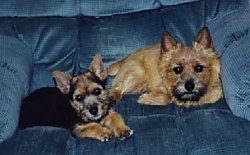 The Norwich Terrier is a short, sturdy, strong, little dog. The head is slightly rounded and wide, with a good amount of space between the ears. The wedge-shaped muzzle is strong, with a well-defined stop. The small, oval shaped eyes are dark in color. The medium sized ears stand erect. The legs are straight and the feet are round with black toenails. The medium sized tail is set high, level with the topline and is usually docked by half. Note: it is illegal to dock tails in most of Europe. The wiry, straight coat is about one and a half to two inches long. Coat colors include red, wheaten, tan, black and tan, or grizzle with or without dark points and occasionally with white markings.

Among the smallest of the working terriers, Norwich Terriers are active, courageous, affectionate, balanced and without any nervousness or quarrelsomeness. They are easy to train and need consistent rules to follow. These little dogs love everyone and are good with children. Because of their ratting instincts they tend to love anything you toss for them to chase after, such as toys, balls, sticks or bones. If left outside for a long period of time with nothing to do, without providing long pack walk to drain their energy, they can become barkers and diggers. This breed is generally good with other pets such as cats and dogs, but should not be trusted with small animals such as hamsters, pet rats, mice or guinea pigs. Do not allow this little dog to develop Small Dog Syndrome, where the dog believes he is pack leader to humans. This can cause many varying degrees of behavior problems including, but not limited to, separation anxiety, jealousy and guarding behaviors.They can be difficult to housebreak.

Some lines are prone to back problems and genetic eye diseases, but are generally healthy.

The Norwich Terrier will do okay in an apartment if it is sufficiently exercised. They are fairly active indoors and will do okay without a yard.

These little dogs were bred to work. They are energetic and thrive on an active life and need to be taken on a daily walk. They can jog for short distances. While out on the walk the dog must be made to heel beside or behind the person holding the lead, as in a dog's mind the leader leads the way, and that leader needs to be the human. Teach them to enter and exit all door and gateways after the human.

The shaggy, medium-length, waterproof coat is relatively easy to care for, but daily combing and brushing is important. Little clipping is required. Take extra care when the dog is shedding. Bathe and dry shampoo only when necessary. This breed is a light shedder.

Developed in East Anglia, England, the Norfolk and Norwich Terriers used to be the same breed with two different ear types; both were referred to as the Norwich Terrier. The English were the first to separate them in 1964. In 1979 the AKC officially deemed them as separate breeds, the Norwich having small perked ears and the Norfolk with dropped ears. Another slight difference is the Norfolks are angular in shape and the Norwich Terriers are more round. The dogs were used as barnyard ratters and to bolt foxes that had gone to ground during a fox hunt. Their small size allowed them to get in and out of fox dens easily. After the foxes were flushed from their dens hunters on horseback would resume the chase with their hounds. 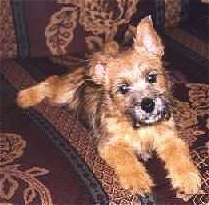 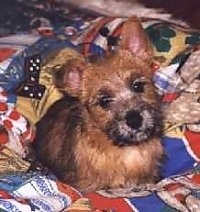