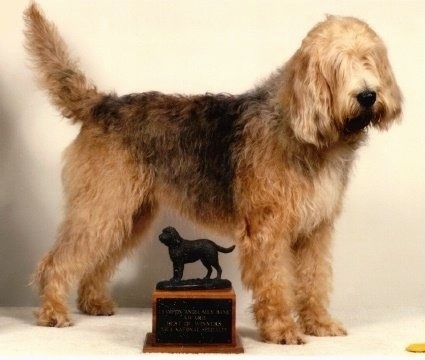 The Otterhound is a large scent hound. The body is slightly rectangular in shape. The large head is fairly narrow. The muzzle is about the same length as the skull with a slight stop. The large nose is dark with wide nostrils. The teeth should meet in a scissors bite. The deep-set eyes have a color that complements the coat of the dog: dogs with darker rims have darker eyes and those that have a liver or slate pigment have hazel eyes. The low-set, long ears reach at least to the top of the nose and are folded, hanging down loosely. The muscular neck has an abundant dewlap. The long tail is set high, thicker at the base and tapering to a point. Dewclaws on the front legs are sometimes removed. The webbed feet are deep and thick, with arched toes. The Otterhound has a double coat that is 3-6 inches (8-16 cm) long. The oily outer coat is rough, course and dense with a broken appearance. The undercoat is water resistant and soft. The dog has a shaggy face and bushy eyebrows. The coat comes in all hound colors including but not limited to grizzle or wheaten with black markings.

The Otterhound is fearless and animated. It is devoted to its family and good with children. Friendly, loving and happy with a lot of spirit, it makes a good companion. It is a friend to all other dogs, family pets, children and people in general, however due to its hunting instincts, it will chase non-canine animals. It can, however, get along with cats in the family. This breed is affectionate and intelligent. Because the Otterhound was never traditionally kept as a pet, it is not among the most responsive of breeds. Training the Otterhound takes patience. If the Otterhound senses the owners are weaker minded than itself it will become quite willful, acting independent with a mind of its own as it will believe it needs to run the home. The best results are achieved with a determined, consistent, loving hand. Use the classic "iron fist in a velvet glove" approach when training this dog. The Otterhound is a low-key dog that can function as a quiet companion. They like to roam and use their noses and have a tendency to snore. Otterhounds have a harmonious, boisterous and powerful voice that carries for long distances. They like to bay, though they don't bark excessively. A great swimmer, they can swim for hours without resting, even in cold water. They will dive into the water seeking their prey.

Some lines are prone to hip dysplasia, thrombocytopenia, hemophilia and bloat. Do not overfeed for it will gain weight easily. A minor concern is elbow dysplasia.

The Otterhound is not recommended for apartment life. They are relatively inactive indoors if they have sufficient exercise. They do best with at least a large, well-fenced yard. It can sleep outdoors in temperate or cool climates if given a good shelter.

The Otterhound needs a lot of daily exercise in a safe area or on a leash, and if possible, frequent swimming. They need to be taken on a daily walk or jog. While out on the walk the dog must be made to heel beside or behind the person holding the lead, as in a dog's mind the leader leads the way, and that leader needs to be the human. They have a tendency to forget everything in the chase after an interesting scent is discovered, so therefore they should only be allowed to run free off the leash where they can be controlled and kept safe. They should have a well-fenced yard and make excellent jogging companions.

To avoid matting, the Otterhound's weather-resistant coat should be combed or brushed at least weekly. It may need its beard washed more frequently. The coat is supposed to look natural and therefore should not be clipped. This breed is an average shedder.

The Otterhound's exact origin is not known, but some believe it originated in France. This rather old breed was developed by crossing the Bloodhound with rough-haired terriers, Harriers, and Griffons. When fishermen realized that otter were preying on the fish supply, they used packs of Otterhounds to hunt the otter, hence where the dog got its name. The Otterhound has a sense of smell so acute that it can smell in the morning an otter that passed through the water the night before. In the 20th century the otter population dropped and since the dogs were no longer in high demand their numbers dropped as well. In 1979 sea otters were added to the protected species list and the Otterhound numbers dropped dangerously low. A group of breeders dedicated themselves to saving the breed. While the breed is still rare it is no longer endangered. They have been successfully used to hunt bear, raccoon and mink. It has a good sense of smell and is ideally suited to drag-hunting or searching.

Note: In the United States, the sea otter is considered endangered at this time, but the river otter is not. River otter populations are plentiful and growing. They had been protected in some areas due largely to their intolerance of pollution, but because of the work and dedication of departments of natural resources and trappers, have been relocated and reestablished as viable breeding populations throughout the country. As a species, the river otter is not threatened, protected or endangered. They are considered furbearers and are allowed to be harvested in accordance to state wildlife laws. 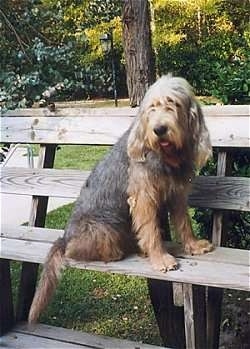 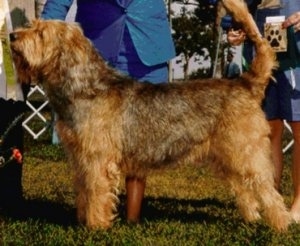 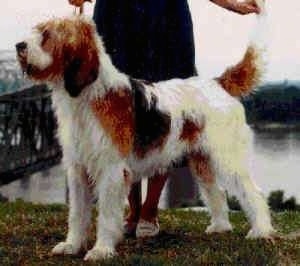 This is a very handsome Otterhound named Ch. Ottertail Otterly Ridicqlus AKA Ottie. Ottie is a very good specimen of a tricolored Otterhound.