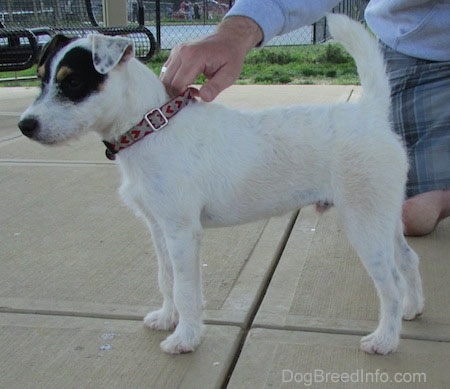 Formally known as the Jack Russell Terrier in the USA, the Parson Russell name is now recognized by the American Kennel Club. The strong head is in good portion to the rest of the body. The muzzle is strong and rectangular. The stop is well defined but not prominent. The nose is black. The dark, almond-shaped, moderate sized eyes have dark or pink rims. The V-shaped ears fold forward. The teeth meet in a scissors bite. The chest is narrow with moderate depth. The legs are strong and straight. The tail is somewhat set high and docked so the tip is approximately level to the skull. Note: The practice of cutting off a dog's tail (docking) is illegal in some countries. The feet are round and catlike. The harsh double coat comes in both smooth and wirehaired. The coat color is predominantly white with black, tan or grizzle markings or a tricolor combination. Brindle markings are a disqualification in the show ring.

The Parson Russell Terrier is a cheerful, merry, devoted and loving dog. Spirited and obedient, yet absolutely fearless. Careful and amusing, he enjoys games and playing with toys. Stable Parsons are friendly and generally kind to children. Children should be taught not to tease or hit the dog. They are intelligent, and if you let them take an inch, they can become willful and determined to take a mile. It is paramount that you are this dog’s pack leader. He needs to be given rules to follow, and limitations as to what he is and is not allowed to do. Do not let this little dog fall into Small Dog Syndrome, where he believes he is pack leader to all humans. This is where varying degrees of behavior problems will arise, including, but not limited to guarding, snapping, separation anxiety and obsessive barking. They are highly trainable, able to perform impressive tricks. They have been used on TV and in the movies. However, if you do not show authority towards the dog, it can be difficult to train. This breed needs a firm, experienced trainer. Parsons that have been allowed to take over can be aggressive with other dogs. Some have killed or been killed in dog fights. Be sure to socialize the Parson. They have strong hunting instincts (stronger than your average terrier) and should not be trusted with other small animals. They like to chase and explore. Be careful not to let them off the lead unless they are very well trained. Parson Russells like to bark and dig. They tend to get restless and destructive if not kept fruitfully occupied and well exercised. Parson Russells climb, which means they can climb over a fence; they also jump. A Parson that stands 12 inches high can easily jump five feet. PRTs are not the breed for an inexperienced dog owner. The owner needs to be as strong-willed as the dog is, or this little guy will take over. With the right owner the Parson can really excel, but is not recommended for those who do not understand what it means to be a dog’s true pack leader. Parsons that are mentally stable, with all of their canine instincts met, will not display these negative behaviors. They are not traits of the Parson Russell, but rather human brought on behaviors that are a result of inefficient leadership, along with a lack of mental and physical stimulation. They will thrive with a job to do. The Parson Russell Terrier must present a lively, active and alert appearance. It should impress with its fearless and happy disposition. It should be remembered that the Parson Russell is a working terrier and should retain these instincts. Nervousness, cowardice or over-aggressiveness should be discouraged and it should always appear confident.

Some are prone to dislocation of the kneecaps, inherited eye diseases, deafness, Legg Perthes—a disease of the hip joints of small breeds of dogs.

The Parson Russell Terrier will do okay in an apartment if it is sufficiently exercised. These dogs are very active indoors and will do best with at least an average-sized yard.

The Parson Russell Terrier is a pleasant companion when it is sufficiently exercised; however if it does not get enough, it may become a nuisance. Your dog needs to be taken on a long, daily, brisk walk. In addition, he will be in his glory with space to run, hunt and play.

If the Parson is left alone during the day, be it in an apartment or a house, it should be well exercised before the human leaves for work by taking it on a long pack walk or jog, and then taken out again when returning home.

All coat types are easy to groom. Comb and brush regularly with a firm bristle brush, and bathe only when necessary. To show, owners must strip the coat. Like the rough coat, the broken coated Parson needs to be stripped out also. This breed is an average shedder. 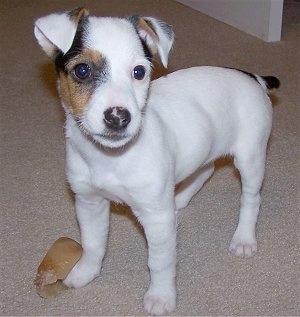 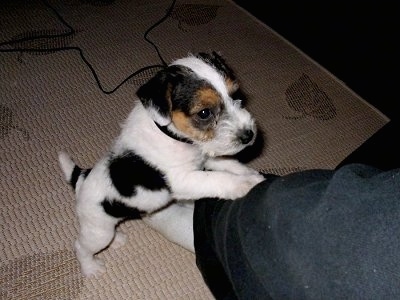 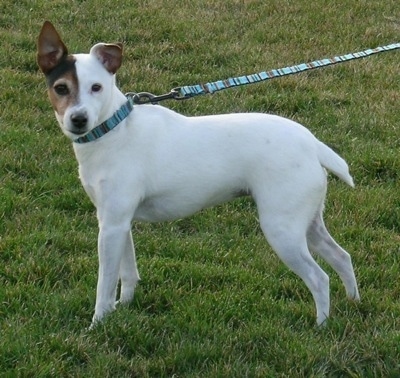 "This is a photo I took of our Reign-Bo. She is an adorable 7½-year-old tricolor Parson Russell Terrier. Reign-Bo is very confident, self-assured and incredibly smart. She is very energetic and is always ready to play. She does not care much for other aggressive dogs and will stand her ground if challenged. She does shed but her hair doesn’t seem to stick to everything like other breeds. She absolutely loves children and has great patience with them. She also gets along well with our cockatoo bird and guinea pig which is somewhat rare for a Parson Russell Terrier. She loves our horses and they love her, too. She is such a delightful and charming companion and we love her so much." 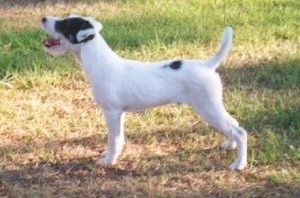 This is Lopresti Chase, a six-month-old puppy owned by Lopresti farms. 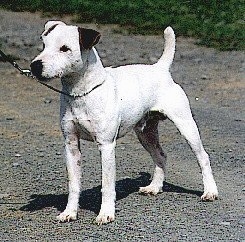 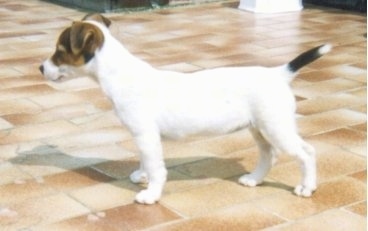