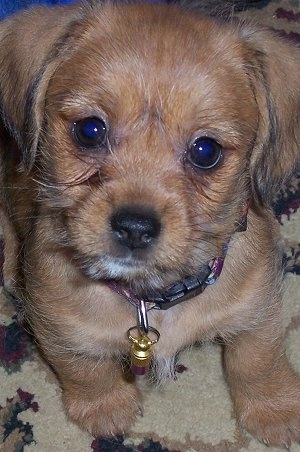 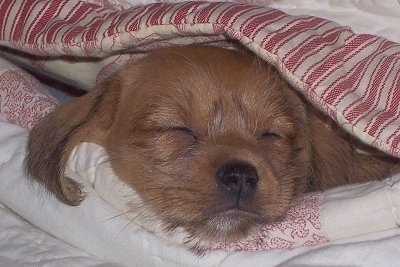 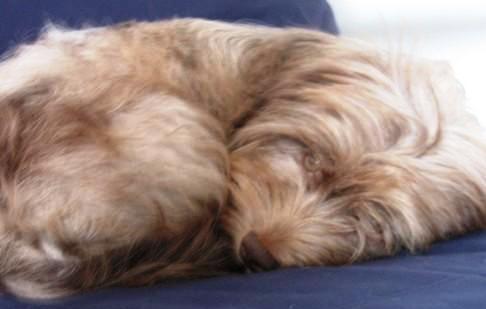 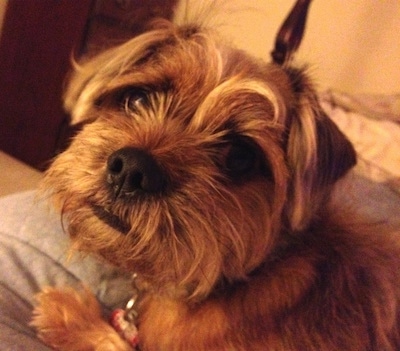 Midnight was one year old in the photo to the left and two years old in the photo to the right—"His dad was a Dachshund and his mom was a Shih Tzu. I got him for free because the Shih Tzu's pregnancy was a complete surprise to her owner, and she didn't think she could sell the puppies (3 males). He loves attention and can't get enough of it. Back scratches, belly rubs...he loves it all. He likes to beg by standing on his hind legs and flailing his front paws together like he's trying to put out a fire. He's small, but he's a serious watchdog who will bark at anything that comes within 50 yards of our house. Because of that, he's our unofficial doorbell. Housetraining has been a challenge, though. At three years old, he still doesn't tell us when he has to go, so we do a combination of taking him outdoors at certain times and having newspaper available for him to do his business. He is very greedy, so he's put on some weight. He'll search the house from top to bottom looking for crumbs, and he'll sit under us while we eat to catch anything that falls. When he gets a bath, he hates getting rinsed off and will try to bite the stream of water that comes out of the sprayer. He likes getting brushed, but he can't stand getting his nails clipped. He loves to chew ice, and he'll shred a paper towel to smithereens if you don't watch him. There's a cat in the house too, and they get along pretty well most of the time. He likes children, but he's not too fond of adult strangers, especially men. Although he's high strung and can sometimes be whiny, he's a load of laughs and an overall great companion."