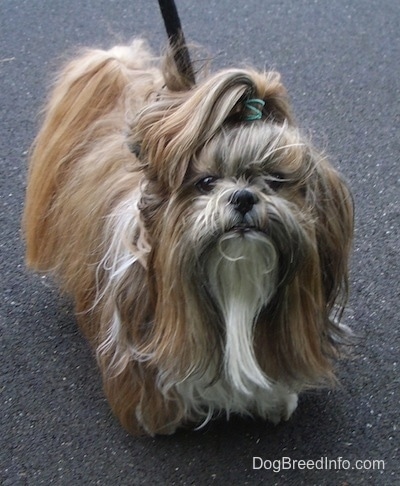 Americans commonly pronounce the Shih Tzu as SHEET-zoo; however, the actual original Chinese translation is, "sure-ds."

In the Chinese pronunciation the "ds" is pronounced the same as the "ds" at the end of the word "words." It is Chinese Mandarin, and translates directly to "lion." That is where the term "lion dog" comes from. The moniker "chrysanthemum dog" and "sheet-sue" are common in America, but are both inaccurate American renditions of the original Chinese.

The Shih Tzu is a small, sturdy dog with a body that is slightly longer than it is tall. The head is round and broad, and wide between the eyes. The square muzzle is short, with an inch or less from the tip of the nose to the defined stop. The nose is broad, with well-open nostrils. Nose, lips and eye rims are liver on liver colored dogs, blue on blue dogs and black on all other colors. The teeth meet in a level or under bite. The large, round eyes are dark in color, but lighter on blue and liver dogs. The large, pendant, low-set ears hang down and are covered in abundant hair. The back is level. The muscular legs are straight and well-boned. The high-set tail is carried over the back and is covered in abundant hair. Dewclaws are sometimes removed. The double coat is dense and long, flowing down over the dog. The hair above the eyes is often tied in a topknot. There is a profuse beard and mustache and the hair on the muzzle is short. Coat comes in all colors.

The Shih Tzu is an alert, lively, little dog. It is happy and hardy, and packed with character. The gentle, loyal Shih Tzu makes friends easily and responds well to consistent, patient training. It makes a very alert watchdog. It is courageous and clever. Playful and spunky, this affectionate little dog likes to be with people and is generally good with other pets. Some can be difficult to housebreak. The Shih Tzu needs all of the humans in the house to be pack leaders, with the rules of the house made consistently clear. Owners who allow their dogs to take over may find them to be snappish if they are surprised or peeved. Because of this dog’s small size and its adorable face, it commonly develops Small Dog Syndrome, human induced behaviors where the dog believes he is the boss of humans. This causes a varying degree of behavioral issues, such as, but not limited to separation anxiety, guarding, growling, snapping, and even biting. These dogs may become untrustworthy with children and sometimes adults, as they try and tell the humans what THEY want THEM to do. They will be obstinate as they take their stand and defend their top position in the pack. They may bark obsessively as they try and TELL you what they want. These behaviors are NOT Shih Tzu traits, but rather behaviors brought on by the way they are treated by people around them. Give this dog rules and limits as to what it is and is not allowed to do. Be its firm, stable, consistent pack leader. Take it for daily pack walks to burn mental and physical energy. Its temperament will improve for the better, and you will bring out the sweet, trustworthy dog in it.

Prone to slipped stifle and spinal disc disease caused by a long back and short legs. Also ear infections, eye problems such as cherry eye and early tooth loss. Tends to wheeze and snore and can have respiratory problems. These dogs gain weight easily and should not be overfed.

The Shih Tzu is good for apartment life. These dogs are fairly active indoors and will do okay without a yard. This breed is sensitive to the heat.

The Shih Tzu needs a daily walk. Play will take care of a lot of its exercise needs, however, as with all breeds, play will not fulfill its primal instinct to walk. Dogs that do not get to go on daily walks are more likely to display behavior problems. They will also enjoy a good romp in a safe, open area off lead, such as a large, fenced-in yard. Do not overfeed this breed or it will quickly become fat.

About 15 years or more

These little dogs require a good daily grooming using a bristle brush. When kept in a long coat a topknot is usually tied to keep the hair out of the dog's eyes. Some owners prefer to have them trimmed to make the coat easier and less time-consuming to care for. Keep the ear passages and area around the eyes clean. Shih Tzus have sensitive eyes that need to be kept clean. There are special drops you can buy to put in them if needed. Ask your vet what to use on your dog. This breed sheds little to no hair and is good for allergy sufferers if its coat is kept very well groomed, due to the fact that they shed little skin dander.

Sixteenth century documents and paintings show dogs resembling the Shih Tzu. The Shih Tzu is said to have descended from crossing the Lhasa Apso or Tibetan mountain dog and Pekingese, in the city of Peking in the 17th century. The dogs were favorites of the Chinese royals and were so prized that for years the Chinese refused to sell, trade, or give away any of the dogs. It was not until the 1930s that the first pair was imported to England, when it was discovered by English soldiers during World War II. The Shih Tzu was recognized in Britain in 1946. The AKC recognized the breed in 1969. The name "Imperial Shih Tzu" or "Tiny Teacup Shih Tzu" is often used to describe a smaller sized Shih Tzu, bred smaller than the written standard. 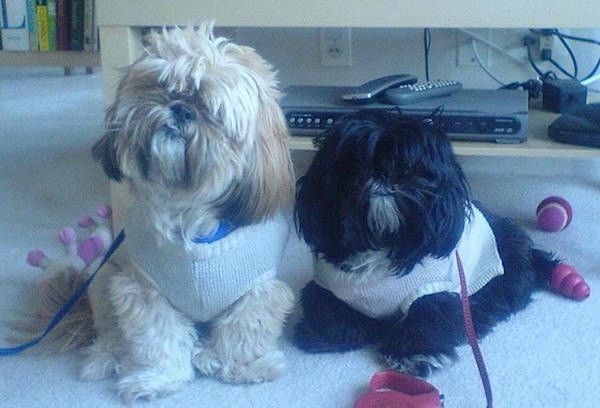 Shih Tzus, Troy & Tia at 12 and 11 years old—"Troy (Beige) and Tia (Black) have been with me since they were 8 weeks old each. Troy is the leader, total alpha. However, when other dogs are in the mix, Tia is definitely a bully. :) They love people. Troy is more vocal about seeking attention but Tia sneaks into your heart quietly." 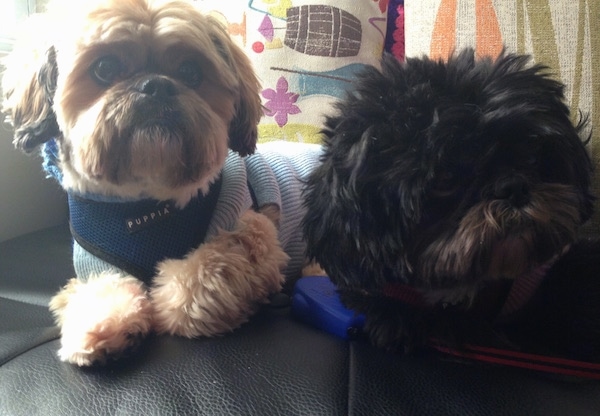 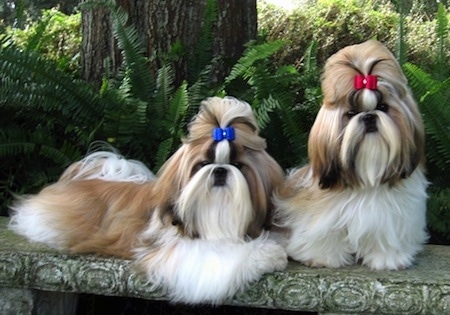 "Shih Tzu brother and sister Tian Mi's Over The Top aka John J and AM CH Tian Mi's Isadorable aka Izzy. John J and Izzy are typical Shih Tzus who do not meet a stranger. They enjoy dog shows or just being couch potatoes." 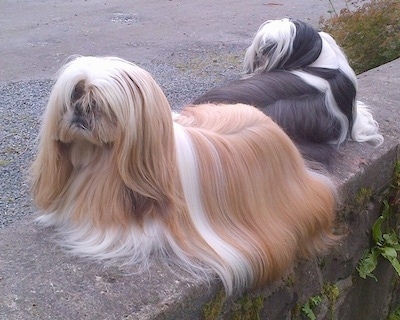 Fred (black/white) and Red (red/white) the Shih Tzus at 5 years old—"Fred and Red are brothers (I'm convinced they are twins) never been apart. They are virtually joined at the hip. Friendly, mischievous, and always raring to go. They are like pups and love to show off when on the lead in true show dog fashion trotting along in perfect unison. I keep their coat long and could never imagine them clipped! I am constantly asked the question how long does it take to groom them? I'm not exaggerating when I say, 'I spend more time on their hair than I do mine...'" 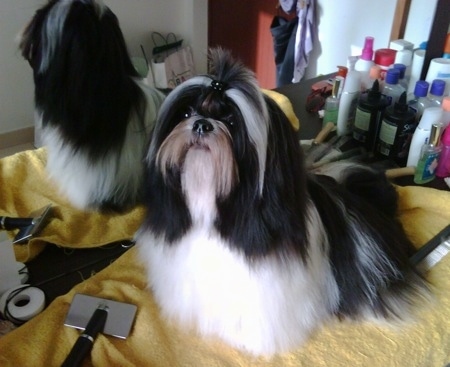 "This is my little Shih Tzu. Her name is Foo, which means Lion Dog of Tibet. I chose her name because it is related to her breed. She is only 1 year old in this picture. She barely barks and most of the time loves to play. I'm going to prepare her for dog shows, since she has a long beautiful coat and a pure female face." 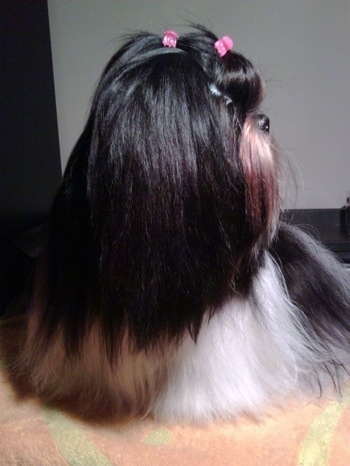 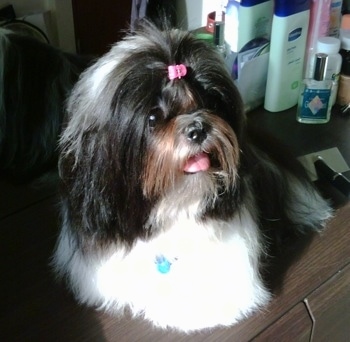 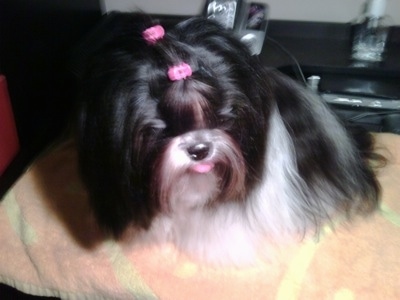 Rachel the Shih Tzu at 6 months old—"This is my personal photo of Rachel. She is 6 months old in the photo. Everything stated about the Shih-Tzu temperament from dogbreedinfo.com has posed true for her too. Rachel is a "mighty guard dog" of our 2 bedroom loft apartment in Downtown Cleveland. Our apartment is 1400 square feet and she does get plenty of exercise with the open floor plan; however, a daily walk is needed... of course unless it's raining or too cold (as she can be stubborn if the weather is not ideal). I chose the name Rachel because of her sophistication. She is now a very much "well balanced" Shih-Tzu... although as I have learned from puppy kindergarten and Caesar the Dog Whisperer a dog/puppy needs to know whom is the owner and pack leader (even if it is only the 2 of us). Our 3rd and 4th month together wasn't very easy. She was a noisy roommate who wouldn't pick up after herself. A pee-pee pad and the word "no" paired with "good girl" was a good stepping stone for Rachel and I." 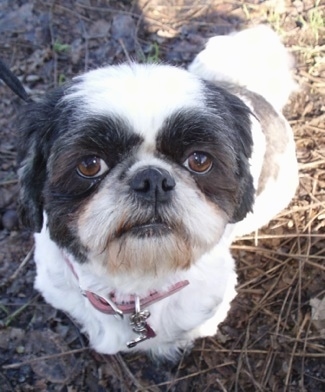 "Mei Lee is truly one of a kind. Without much training on my part she has become one of the most obedient creatures I know. She is leash trained but I never hesitate to walk her without a leash because she never leaves my side. Sometimes I forget that she is only a dog, but she means much more to me than that. She is like a child to me. She has such a great little personality, although she isn't the most active little dog. She prefers to sit on the couch and watch TV on our relaxing evenings together. Her favorite shows are The Dog Whisperer and America's Funniest Home Videos. Her favorite foods include carrots, apples, bananas and tangerines; she has no problem sitting on me until I give her a slice. Lastly, her favorite activity is walking and hiking. Although she is a Shih Tzu, she is a great mountain dog because she has no problem with getting a little dirty, and when we can't get to mountains she loves to take a cool relaxing dip in my parents’ pool during the hot days of summer." 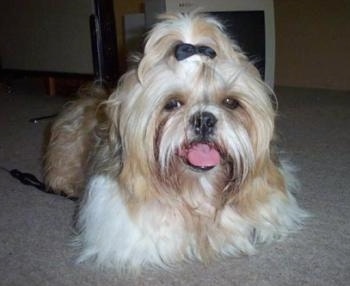 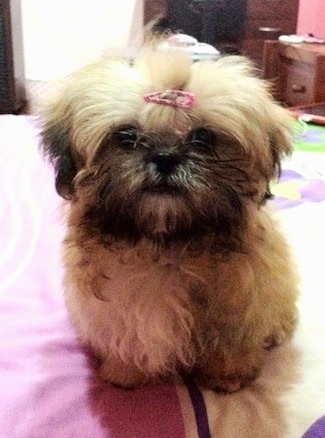 "Muffin is a tiny Shih Tzu (others call it an imperial or princess type; however, I am aware that this is not a separate breed of Shih Tzu). We bought this kind of Shih Tzu because my boyfriend and I could not afford the standard one. She is the smallest of the litter and I give her extra care. She is healthy, playful and loyal just like other Shih Tzus. The only problem I have with her is that she bites too hard when playing, but I am currently training her. She's like my shadow; keeps on following me from room to room. She barks at her own reflection in the mirror. She's really playful. Even when I'm lying in bed, using my iPad, she just sits by my side and stares at me, then suddenly jumps on my face. She becomes excited whenever I'm holding her doggy bowl with dog food in it and whenever I'm giving her vitamins, she keeps on jumping. I just hope that people would stop insulting "teacup" Shih Tzus. We are aware that this is not a separate breed. I didn't buy a Shih Tzu for dog shows; I bought one because I want a companion. Even though this tiny Shih Tzu, Muffin, is rejected by the Kennel Club, she still deserves the same amount of love and affection :) PS - the breeder does not intentionally breed "imperial" Shih Tzus. She is just the smallest of the litter and all her siblings are the standard ones. Muffin was the last one. I bought her for a cheaper price, about half the price of the standard one." 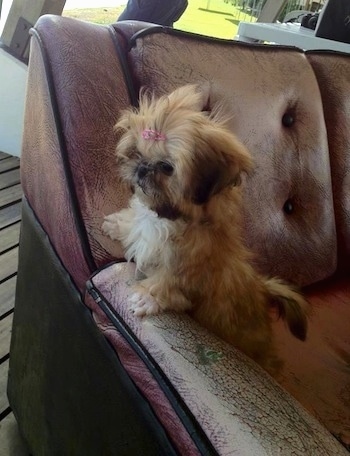 Muffin the purebred Shih Tzu was the runt of her litter and smaller than her other littermates, but she is perfectly healthy.