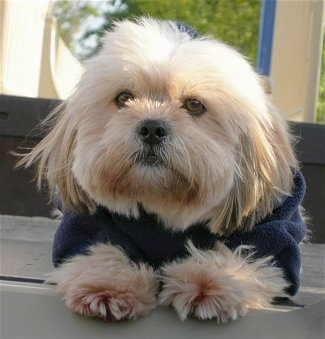 The Shih Apso is not a purebred dog. It is a cross between the Shih Tzu and the Lhasa Apso. The best way to determine the temperament of a mixed breed is to look up all breeds in the cross and know you can get any combination of any of the characteristics found in either breed. Not all of these designer hybrid dogs being bred are 50% purebred to 50% purebred. It is very common for breeders to breed multi-generation crosses. 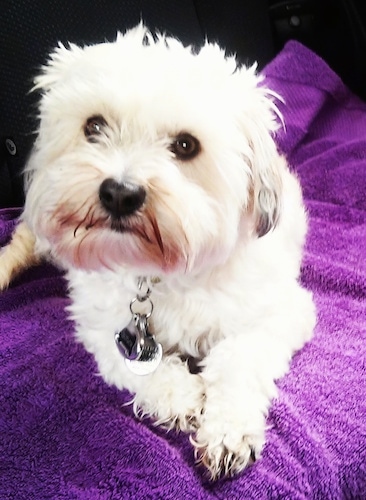 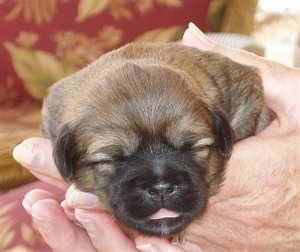 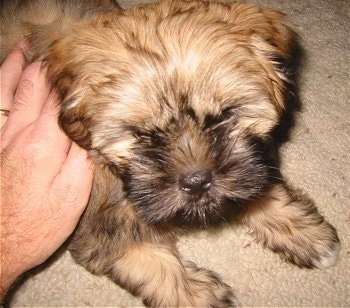 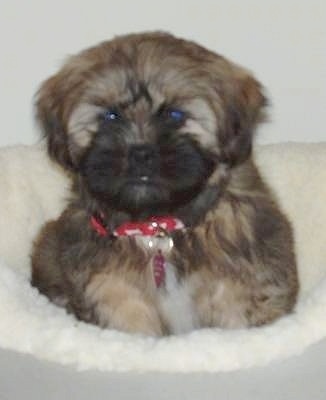 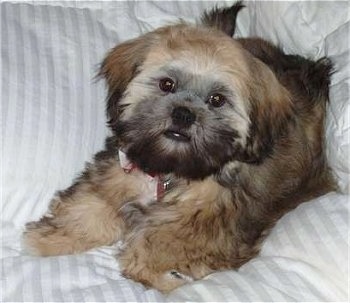 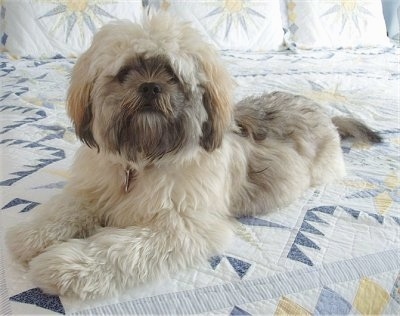 Brindle the 18-month-old Shih Apso (Lhasa Apso / Shih Tzu mix)—believe it or not, Brindle was born brindle in coloring, hence the name. Coat color change is common within the Lhasa Apso breed. See more pictures of Brindle below. He is one of seven pups from the litter. The dam is the standard Lhasa—cream fur, gray face. The sire was a tricolor—black/brown/white Shih-Tzu. There were three pups like Brindle, one pure black with white blaze on the chest, and three tricolors. Four females, one male. Weights run from 15 pounds through 22 pounds. Brindle was the largest pup in the litter. His owner jokes, "He appears to be species-challenged. He often acts much more like a cat <gasp>. The vet and the breeder insist that I have a dog. It does "woof." He is quite terrier-like. He will nicely retrieve like the Goldens that I've had, but then he wants to kill it. NOT a water dog, but does like a bath and grooming. Enjoys being fussed over."

He also says, "The "wild puppy" behavior had pretty well passed by 9-10 months. Housebreaking went pretty well. By 4 months, the accident level was pretty well down. I have done the crate training with my dogs, which helps a LOT. However, the carpet cleaner is your friend. As Barbara Bush pointed out, puppies and carpets are a bad mix.

"However, I did have problems out at 4 months. Pup would wake up at 4 AM and make a fuss. Took him out. Nothing. Turns out he was simply lonely. Caught on to that, so took him in bed with us. You are talking to a man who has a king-sized bed so that there is more room for the dog. He has no idea what a dog bed is for. There is some possibility that we have gone over the line from pampered to spoiled... ;-)  He now associates the crate with us going out for a few hours, and heads for under the bed if he hears the crate door. I have to use a broom to get him out from under the bed...not a pretty picture.... MUCH too smart a dog. I think that goes with the terrier and watchdog personality."

Below are photos of him as a pup. "You would not know it is the same dog. The color change is now complete. He is completely cream-colored, with the gray face/beard. Very fine fur, which has a tendency to mat. I use "detangler" to keep it under control, and have to groom him daily. Personality is definitely a mix of the two breeds. Wants to sit in your lap and guard your stuff!"

"You can still see some of the brown markings. He still has dark guard hairs if I let him go long. The battle is between very pretty, long hair and matting up problems." 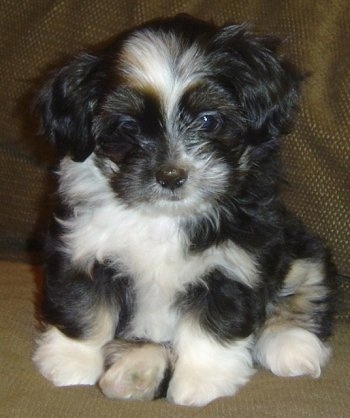 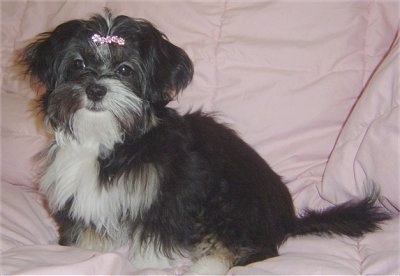 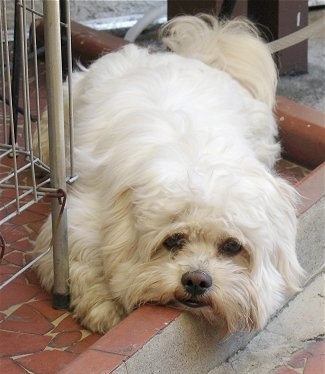 Enzo the Shih Apso at 1½ years old—"We got him as a present from a friend, who’s the owner of his purebred Lhasa Apso father! His mother is a purebred Shih Tzu. Enzo has the looks and the temperament of a Lhasa; I even questioned myself if his mother was really a Shih Tzu…LOL. He is a very jealous guy; a bit moody and aggressive, but I love him just the way he is!" 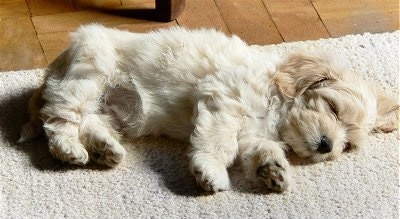