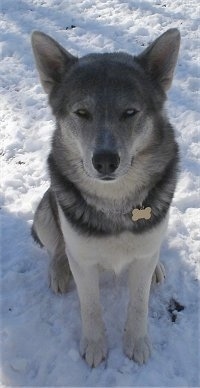 A Wolf Hybrid can be quite skittish and does not respond well to inanimate objects, fast motion, loud noises or new people. It requires much patience. Training is not for the weak and serious consideration should be given prior to obtaining a Wolf Hybrid, as it requires firm, consistent training and ample space to roam. If there's something you find foul and offensive you can bet a wolfdog will roll happily in it and coat itself in the funk! It is not until a Wolf Hybrid is about 18 months of age that it will start showing signs of the wolf. Wolves younger than 18 months of age are adolescents; they are playful and adaptable. They take directions readily and can bond with other species. Young wolves act more like the common dog as they have not developed into maturity. As a wolf grows out of its adolescence, its hormonal system reaches maturity and it will begin to exhibit all of the typical behaviors of the wolf.

As of about 1990 the correct term for a mix of a wolf and a domestic dog is “wolfdog.” The dog was reclassified as a sub-species of wolf (canis lupus familiaris) and as such, it is impossible to have a hybrid as they are two of the same species. Although technically incorrect, the term "hybrid" is still used by many, particularly when it comes to mixing two purebred domestic dogs.

It was brought to our attention by some wolfdog fanciers that there are many animals out there that are claimed to be wolfdogs, but are actually Nordic-type dog mixes. Apparently some are pictured inside this section. We made the decision to keep this wolf hybrid section as a comparison with the dogs that have been proven to be true wolfdogs. You can see some examples at Non-Wolfdogs: Mistaken Identity.

The Dog Breed Info Center® is not claiming the dogs in this section are not true wolfdogs. We would like you to do your own comparison between this wolf hybrid section and our proven wolfdog section. There are many dogs in shelters that are killed because they look like wolves when they are actually a Nordic-type dog, such as a Husky or Malamute mix. Falsely labeling animals as wolfdogs in shelters can be detrimental. Nordic dogs are being killed and wolfdogs are not going to the proper rescues where there are people who know how to deal with them.

The Wolf Hybrid is not a purebred dog. It is a cross between a domestic dog and a wolf. The best way to determine the temperament of a mixed breed is to look up all breeds in the cross and know you can get any combination of any of the characteristics found in either breed. Anyone owning a Wolf Hybrid should read these two pages: Top Dog and Establishing and Keeping Alpha Position, and MUST understand dog/wolf psychology and be willing to follow it. This hybrid is not recommended for most people. 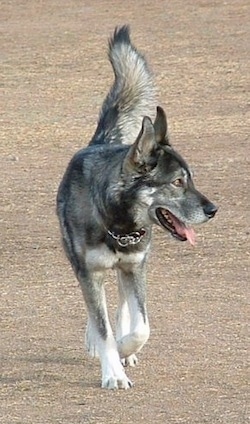 "I first met Charlie, my Siberian Husky / Timber Wolf mix at a homeless shelter for youth. Charlie needed a foster home so that his owner could focus on getting his own life on track (his owner has since reunited with his human family). Charlie was born in Alaska and was brought to the southwest. His paws are extremely sensitive to our heat. When I first encountered him he was a 4-year-old male with the typical wolf trait of timidity around strangers and had more of a nonchalant attitude toward people. He has the typical long-legged body, a double coat that sheds constantly, and thick fur on his shoulders and hind legs that becomes very exaggerated when he is disturbed. He has one blue eye that helps show off his Siberian Husky physical traits. His webbed feet give him an agility that he displays over my other dogs when I take them up north to play in the snow—he seems to run on top of the snow (and loves to make snow-angels) while the rest must trudge through it.

"I had concerns of him becoming unmanageable based on what I knew of wolf-mixes but agreed to foster him (I have other dogs and cats). He did not like mixing and playing with people in his first few months; only having an interest in our other dogs. It has taken a year of acclimation with his new pack and he is most definitely the alpha-dog. He defecates everywhere in the backyard (unlike our other dogs who keep their business confined to one area) and marks all the territory he can while on walks (which must occur 1 or 2 times a day or he becomes extremely restless and will pace and do a quiet howl). He is also extremely possessive of one of the female dogs in my house that he considers his alpha-mate and will place himself between any other dog and his "mate." He does not bark (as the rest of our pack does) but will do a quiet sing-song howl when he wants attention.

"He is not eager to earn our praise or as trainable as the other dogs and I use a method close to Cesar the Dog Whisperer to work with him, managing him with a calm, quiet voice command and my own body language which seems to work best with him. Loud commands or requests for tricks are not effective. Even though he is alpha-dog here, he will extricate himself from any loud noises or exciting situations and make himself scarce. He will also dig holes, but this has been his only destructive trait that we have seen.

"Our biggest challenge with this hybrid mix is his eating. If he has not been sufficiently exercised he will decline meals, and while he will take dry kibble as a treat, he will lose interest in his food and a variety of meat is rotated with his meals to keep up his appetite.

"I have earned Charlie's trust, loyalty and dependence. But I always actively make sure that the wolf in him remains more of a mystery rather than let the wolf run free." 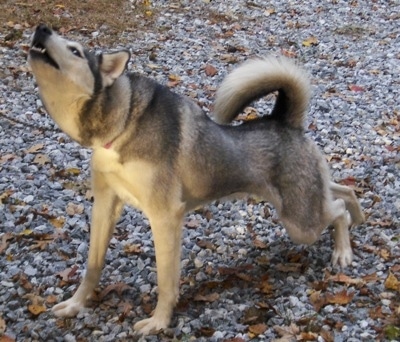 "This is Dakota. S is a Husky / Gray Wolf mix shown here at 3 years old. She loves people, yet is very protective of her family. Loves to go on long rides and walks in the mountains. This hybrid is TOTALLY misunderstood!" 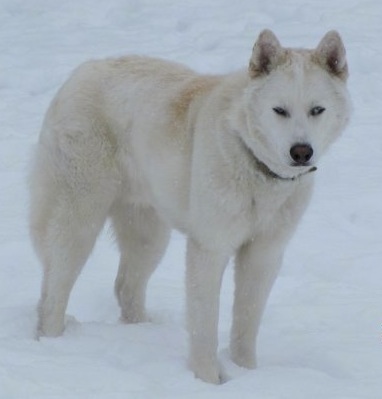 "White Fang is an Arctic Wolf / Siberian Husky hybrid. He is the sweetest guy you could ever imagine. My Daughter (who is 8) likes to use him as a pillow and he seems to actually prefer for her to stay that close.

"White Fang is now 2 years old and he is best friends with our 9-month-old Siberian Husky Shiann. The two cannot be apart from each other for any length of time.

"White Fang, I believe, acts most like a Husky. We have a 6-foot-high privacy fence and gate. That does not stop him, though from taking a stroll through the neighborhood. If he wants out he finds a way out. So, we have just taken to pulling out the lawn chairs and relaxing outside while he and his buddy Shiann are outside playing.

"White Fang's favorite time of the year is winter. Since it snows where we live, it is hard to get him to want to come back inside after he has been playing in the snow. I call him the ultimate snow dog. His coat is very thick and dense. His paws work like snowshoes and he has long claws that he uses for digging himself a hole to lie in when he wants a rest from chasing Shiann in the snow. 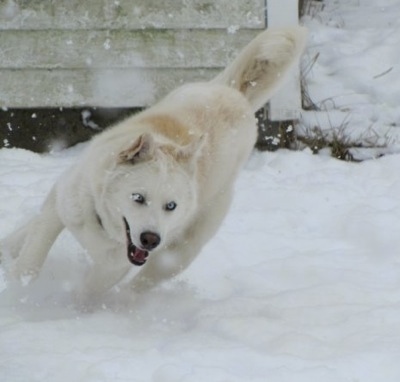 "One thing I have noticed about White Fang is that during the winter his wolf side looks like it wants to come out. He spends almost all of his time outside and he pays little attention to us, but if our Husky is out and we call her in, he might follow. We have a dog door on our back door that leads to the outside. And since during the winter time White Fang is content with staying in the backyard and playing in the snow, we leave the door open so that he can relieve himself in the middle of the night if needed. One night White Fang went outside and found his coveted hole and decided that he wanted to sleep out there, the next thing I knew I heard (what I thought) was a wolf howling. Okay, now I should tell you we live in Indiana; I'm not entirely sure, but I don't think there are any wild wolves out here. Anyway, my husband and I got up to check that the dogs were inside before we locked the dog door, only to find that it was White Fang howling at the moon. Needless to say, he refused to come in and we had a few upset neighbors the next day.

"White Fang is a beautiful dog. He is loving and has not shown any aggression at all. Although, I'm pretty sure he would like to use the cat as a chew toy sometimes. He generally lets the cat be unless he is wanting to play and then he "stalks" the cat." 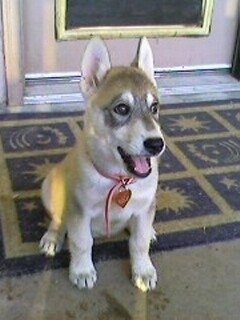 "This is Miya, my hybrid wolf puppy. I was told by the breeder that her father is Timber Wolf and her mom is half Grey Wolf and half Malamute. She is 9 weeks old in this photo and is about 20 lbs. She is very friendly and is somewhat timid. She howls a lot, especially when we are inside and she is outside with our Siberian Husky." 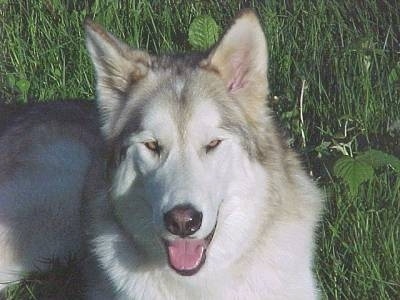 This is Laika, a Wolf / Malamute cross that is absolutely beautiful! She is a wonderful companion and although extremely willful and skittish, she is a sweet and good-humored pet.

"This is Kringle and Powder. They are 3-year-old wolf / Husky hybrids. They are about 80% wolf and 20% Siberian Husky." 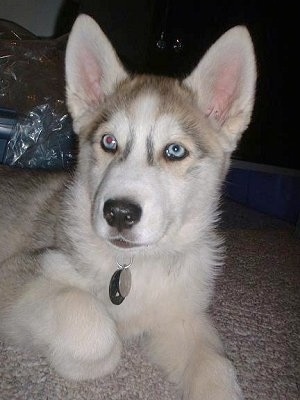 "Raven is a ten-month-old wolf hybrid. She is giant Malamute / Timber Wolf / British Columbian Wolf / Mackenzie Valley Wolf cross. She is very affectionate, scared of nothing and loves my 7- and 10-year-old boys. I have had her since she was 4 weeks old. She is very intelligent, inquisitive and headstrong. She is an alpha female who likes to see just what she can get away with. She does play rough, but she also knows the rules. She was easy to train. She is friendly and likes most people; on the other hand she is protective, and when she doesn't like someone she will bark/howl at them. She is a big girl expected to get up to 130 lbs. and be 32 in. at the shoulder. She is currently at 10 months and is 29 inches tall and is 90 lbs. She is a joy to have as part of our family, and she has a sense of humor that is out of this world. She is wonderful!!" 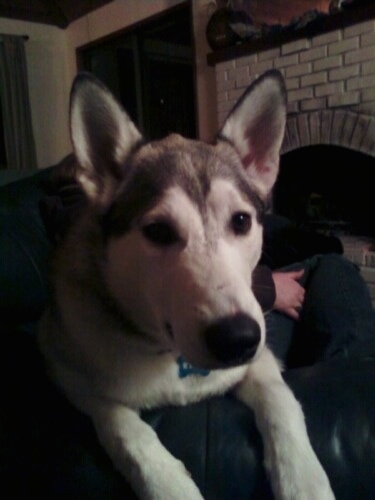 "I have a 50/50 Siberian Husky / Timber Wolf mix that is just wonderful. His name is Kyzer and he is 9 months old. While he has been a good challenge for me, he is training well. He is very smart. I have had a lot of luck with the Gentle Leader. He listens to me much better on walks and doesn't pull. It's great."