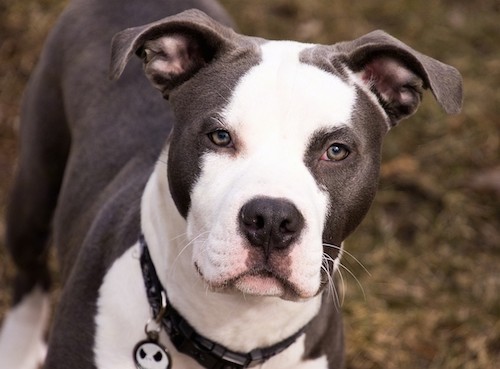 "Atlas is my son's dog. I dog-sit while my son is at work. He is an American Bulldog / American Staffordshire Terrier mix. He's super-smart and learned how to "sit" on command within a half hour. Now he sits with a hand signal. He lives with a pack of Chihuahuas and while he's huge by comparison, he respects the "pack rules" within the group. Atlas loves to fetch his rope-tire toy and will always sit before I throw the toy. We live on the edge of a public golf course and if golfers walk by while we're outside, he runs to the fence (a 12 foot tall chain-link fence) with his rope-tire toy in his mouth, because he thinks they'll play. He has no sense of how big he is and of course, routinely thinks he's a lap dog."

The American Bull Staffy is not a purebred dog. It is a cross between the American Bulldog and the American Staffordshire Terrier. The best way to determine the temperament of a mixed breed is to look up all breeds in the cross and know you can get any combination of any of the characteristics found in any of the breeds in the hybrid. Not all of these designer hybrid dogs being bred are 50% purebred to 50% purebred. It is very common for breeders to breed multi-generation crosses.