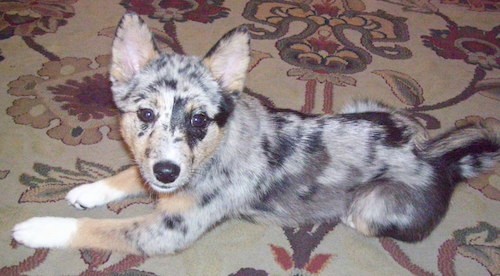 "We are a family of 4, mom and dad, 13 year old son and 10 year old daughter. We were looking for a puppy to grow with our family. I (mom) read an ad in our local paper for puppies for sale, and found our now very much loved Shiba Inu/Australian Shepherd mix puppy! The pictures posted are of our 4-month-old (male) puppy that we named Riggs. The first thing we all fell in love with is how absolutely cute he is! He also happens to be one of the smartest dogs we have ever encountered!"

The Aussie Shiba is not a purebred dog. It is a cross between the Australian Shepherd and the Shiba Inu. The best way to determine the temperament of a mixed breed is to look up all breeds in the cross and know you can get any combination of any of the characteristics found in either breed. Not all of these designer hybrid dogs being bred are 50% purebred to 50% purebred. It is very common for breeders to breed multi-generation crosses. 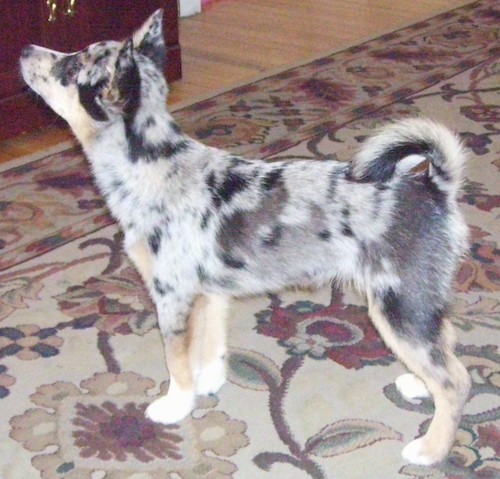 "Riggs has never even peed or pooped in our house from day one! At 9 weeks old we took him outside every 3 to 4 hours to go potty, game him praise and a treat for going outside, and that was it! He now sits by the door and whines a little when he has to go! We read up on the qualities and traits of both breeds,and apparently the house training comes easily to both. Within the first week he was with us, he has learned to sit, lay down, "come up" (puts both paws in the palm of your raised hand), come here, and "no" to anything he's not supposed to be doing. Riggs can be slightly stubborn at times, making us have to reinforce our alpha status, other than that, he is very obedient." 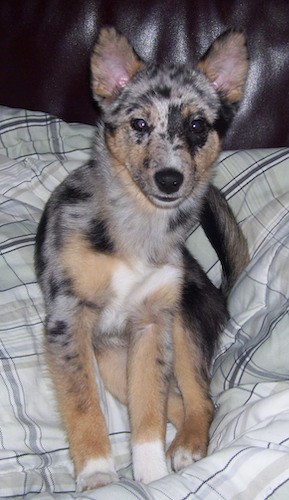 "Riggs is very energetic and loves to be outside, so we walk him several times a day, and usually run with him on the way back home. He loves to "hunt" for treats when we hide them for him in the house. We were told by many people to crate train him, but have never seen the need to. He sleeps in his bed in the corner of our room all night now, and wakes us if he has to go out. Riggs loves rides in the car, and whines for the kids when we drop them off at school. He greets everyone at the door with excitement and kisses. He lets us know we have company before they even get to the front porch to knock! He is playful, loving, cuddly, loyal, and protective. He has been a wonderful addition to our family!"

"Some of the traits of both breeds that we have read about are very noticeable in our pup! He does not like to be dirty, and cleans himself on and off all day, it's almost cat-like. He does not like to step in mud or puddles. He will put the brakes on when approaching a puddle, and either go around it, or wait for one of us to carry him over it if it's too far for him to jump! When he steps in mud, he wipes his feet off in the grass! Odd as it is, he does not like bath time! Go figure... He will jump out of the tub at any chance given, so it usually takes two of us to bathe him, one to hold him, and the other to wash him... not too bad of a trait given all of the good traits that he does have!" 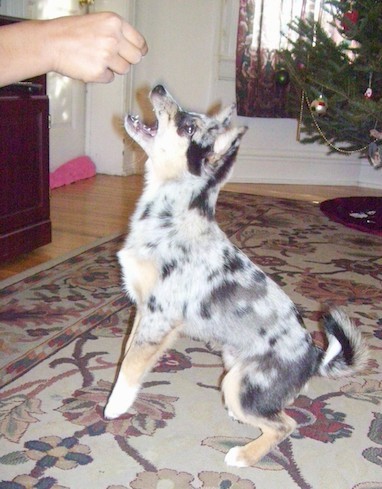 "My husband and I have searched the web to find a mix of the Shiba and Aussie to compare him to and haven't yet been able to find any. Looking on this website did show us that Riggs has the looks of the Shiba, with the Blue Merle colors of the Aussie. We did however also look at the pictures of the Australian Cattle Dog, and we both agreed that Riggs ears and fur around the head and chest look similar to them also. The farmer we bought him from said he was 1/2 Shiba and 1/2 Aussie, so thats what we're going by. He did have the Shiba parent there - but said that the Aussie belonged to one of his neighbors. So we were unable to see the other parent."

"In the future if given the chance, I'd get the same mix all over again. We have been very lucky in every way a dog owner can be. We got an easy to train, well adjusted pet that has quickly become a loved part of our family! And he's just sooo darn cute!!!"