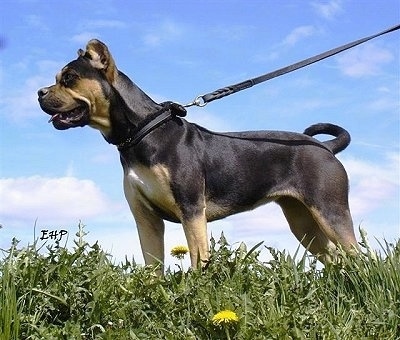 The Alano Español is a molosser (a large sturdy dog whose origins are in Molossia). It has a primitive appearance whose general physiology fits him especially well for running at high speeds for long periods of time and firmly holding wild game or cattle for a long time when ordered. With a well-proportioned body structure, the rib cage is arched, not cylindrical, the chest reaches elbow level, with strong and solid shoulders and withers. The front legs are stronger than the back ones, and are straight whether viewed from the front or from the side. The paws are generally much larger than those of other dogs of the same size and weight. The profile of the Alano's backbone outline is slightly ascending toward the back end or, at least, straight, but not descending. The muscles in the hindquarters are well developed and the back legs show very well defined angles ending in strong feet. The tail is thicker at the base tapering to a point and is never cropped because it is used as a rudder in the dog’s sharp turns and dribbles when hunting or working with half-wild or wild cattle. When the tail is carried low, none of its length rests against the dog’s hind area. The belly is retracted inwards, giving him a more athletic appearance than other heavier molosser breeds. The neck is strong, powerful and wide, showing two double chins that should never hang to low. His head is brachycephalic (Bulldog type) in shape, squared in appearance and with a serious expression. The muzzle is wide and represents approximately 35% of the total length of the head, with a vertical stop. The nose is large, wide and black with open nostrils. The ears are usually cropped, slightly rounded at the tip. Uncropped ears are medium in size and carried folded over the face. The Alano has very powerful jaws. The teeth are wide, well separated from each other with a very strong and firm scissors bite or inverted scissors bite. An under-bite is allowed if it is 2 mm or less. When walking, the Alano has the stride of a sly panther, because of its habit of carrying his head low, slightly and slowly bouncing it from side to side making its strong shoulders more visible. Alanos are tireless molossers that can maintain a constant, graceful, agile trot for a long time. When galloping, they are fast and flexible, fully stretching in and out their whole body in each step, sorting obstacles with enormous agility, making it look as if they will never get tired even if they were required to maintain the gallop for miles. Coat colors include yellow and wolf gray, fawns and reds (in either light or dark tones), with or without tigering (brindling) and or black mask. Black and tan—always with tigering on the tan markings which is described in the Spanish standard as "negro y atigrado" translating as black and tigered. White markings are allowed, but only on the snout, neck and chest, lower legs, belly and at the tip of the tail; the white should never predominate the body.

The temperament of the Alano is very dominant and serious but very controllable by his master, acting submissively toward him/her. This breed is very affectionate with the family and people it knows. It is also extremely patient and good with children. They are reliable, stable, very obedient and bark very little. However, the Alano will watch strangers with suspicion, attacking with little warning, only when the situation requires it. When holding wild animals with its jaws, regardless of the size, nature, or aggressiveness of the animal, the Alano totally ignores feelings like pain or fear and will not surrender until he is told to do so or until he achieves the orders given. The Alano will fight to the death to follow orders, fighting the wild boar or the bull until the end. They are a fearless, loyal, devoted, hard worker. Well-balanced and stable, self-confidant with a very high pain threshold. Powerful and protective, but not aggressive. These characteristics of the breed are not fully apparent until the animal reaches full maturity, which usually happens when the dog reaches 2 1/2 years old or older. Because this breed is bred to function in packs as a team, he is good and sociable around other dogs, enjoying a good romp, playing and just having fun. However, the Alano will not back down if challenged by them. The Alano Español, like all mastiff type breeds, should have a dominant owner who understands instinctual canine behaviors. They can climb trees with amazing cat-like agility and are capable of leaping to great heights from a stand-still position. The Alano can be difficult to housebreak, which makes this breed best as an outside dog. Male Alano puppies tend to chew and be more destructive than female Alano puppies. The objective in training this dog is to achieve a pack leader status. It is a natural instinct for a dog to have an order in their pack. When we humans live with dogs, we become their pack. The entire pack cooperates under a single leader; lines are clearly defined. You and all other humans MUST be higher up in the order than the dog. That is the only way your relationship can be a success.

This breed has never been a bred for looks. Instead it is an ancient rustic dog that has been used to work hard in the country under rough conditions for ages, where only the fittest would survive. This may be the reason for the Alano Español being a very resistant, healthy breed, not prone to suffer from any disease in particular. The owner of Curro states, "When injured or ill, their recovering time is also outstanding. For example: At the age of 80 days Curro caught parvovirosis (Parvo virus in Spanish). The veterinarian gave me no hope for Curro to live more than a week after detecting the virus. It only took him 5 days to cure himself." Along with the Cane Corso, the Alano is one of the very few molosser breeds that do not drool, slobber or snore.

Best suited to live in a yard and sleep outside, the Alano can stand hot and cold temperatures, dryness and humidity with no problem. For example: during inland Spain winters, the temperature reaches from the low 30's to the high 20's (below zero Celsius). In the north of Spain, the humidity is extremely high. In the central area the weather is dry with cold winters and very hot summers, whereas the south could be dry or humid (depending on the province) but with mild to hot temperatures. The Spanish Alano always sleeps outside and will adapt to all these climates with no problem.

If they are not being used as working dogs, but are a family pet, you need to give them a lot of daily exercise. At least three walks daily, one of them a bit longer in an open space where they can run and play, ideally in the country.

The Alano is a shorthaired dog that requires little grooming. An occasional brushing with a rubber brush will help him to shed his coarse, rustic hair and will prevent him from dropping a lot of hair inside the house. However, he is an outside dog and should be outside the house most of the time. Bathe only when necessary as it will remove the natural oils in the skin. This breed is an average shedder.

The Alano is a very ancient breed. There are several theories concerning its origin. Most people relate today's Spanish Alanos to the dogs the Alanos (Alans) brought with them when they invaded the Iberian Peninsula in 406 AC. These dogs did not originate from any breed known today, but instead, were the ancestors of many of the molosser breeds that are very popular today, such as Great Dane or the Dogue de Bordeaux. There used to be Alano dogs not only in Spain, but in other places across Europe invaded by the Alans, however, only in Spain have they survived for more than 1500 years until the present time. A group of Alano enthusiasts spent a lot of their time in the early 1980s working toward the goal of finding out the exact demographic situation of the Alano. The breed was never in dog shows or bred for beauty. At the time everyone thought the Alano had probably disappeared from most of the wild boar hunting expeditions and cattle ranches of Spain. Carlos Contera and his colleagues thoroughly searched all of rural Spain looking for this legendary molosser, whose decline started when its participation in bullfights was banned in 1883. The search was a success. They found a few Alanos in Extremadura (southwest of Spain) and Castille (central plateau) but also a large and stable population of about 300 Alanos in the Encartaciones Valley in northern Spain. These were the same Alano dogs that had been used for centuries to handle a local half-wild breed of cows. The restoration of the breed started from the best of these Alanos. Their DNA was analyzed by the Faculty of Veterinary Medicine of the University of Cordoba to assure their authenticity. The Spanish Alano, in the past, has been used in five basic purposes:

Today it is used for cattle handling and hunting only. When working, the Alano Español depends on its powerful bite, its obedience and its well-balanced personality. The grip of the Alano Español's jaw has become legendary. It is extremely effective not only because the dogs bite using the whole jaw, extending the grip back to the molars steadily and maintain it for a long time, but also because they will release the prey when they are told to do so. The release is as important as the holding when working with the dogs. Some of the Alano's talents include herding, hunting, tracking, watchdog, guarding, police work, Schutzhund, weight pulling, competitive obedience and agility.

Also a special thanks to Melanie Matthews.