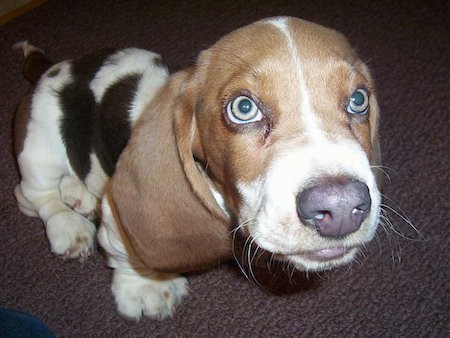 Different breeds of dogs have different traits that are characteristic of their breed. Right off the top of my head if one says Beagle, I think of a tail-wagging, happy dog with a mind of its own, who, if it gets whiff of a scent will wander off in search of the critter on the other end of the smell, not even hearing you calling him back. A German Shepherd is a loyal friend to the family that will thrive on pleasing its owners. A Bichon Frise is a happy, tail-wagging, soft-coated, non-shedding small dog that loves children, but may not be the easiest to housebreak. All breeds have characteristics common to their breed.

One must always keep in mind there is much more that determines what that adorable puppy will grow up to be like. Because it is characteristic for a Bichon Frise to grow up loving people this does not mean there are no Bichons that would never bite a stranger, and it does not mean that all Cocker Spaniels  love all children. Within each breed there are always exceptions to the typical temperaments and characteristics. The way a pup was raised, the amount and type of exercise and leadership an owner provides for the dog effects a dog's temperament tremendously. Those who take the time to learn how to communicate with their dogs and provide what is instinctually necessary will find themselves with better behaved animals.

Within the same litter of any purebred or mixed breed dog will be puppies with different personality types. Some pups are more shy and timid while others are curious and like to explore and not afraid of very much at all. Some puppies have a higher tolerance for pain and some are very sensitive. The pups that are more sensitive are not the ones you want to choose for small children. Some puppies may get spooked by loud noises while others in the litter are not bothered. Some pups within the same litter are going to be more submissive and easier to train, while others are going to, by nature, be more dominant, needing an owner who knows how to handle this.

It is always a good idea to give a puppy a temperament test before you adopt. Perform the steps below. NOTE: most pups will try to puppy bite your hands—this common puppy behavior is not what you are watching for, you will be looking for signs of annoyance.

When performing your test, be careful not to hurt the puppy. Any dog in pain may react. You are simply trying to see how well he tolerates being handled. Rolling the puppy on its back is putting it in a submissive position. A more dominating dog will not tolerate this as well as a puppy that is more on the submissive side.

Do keep in mind there is a difference between puppy biting and dominancy biting. Puppies, by nature, will try to chew on you, and it may hurt. For example, I once went into a pet store (not the best place to buy a puppy) and there was a Rottweiler puppy about 7 weeks old in a cubicle. I reached down to pet him and he turned around and looked at me with his ears back. I then gave its fur a tug, not hurting the pup; he had a lot of extra skin. The puppy, even as young as it was, turned around and growled at me. That was one puppy that will need an owner who can handle a dominant dog; he will forever test the pack order. His Rottie littermates didn't mind my tug to their backs, but rather seemed to enjoy the attention. There are play growls and there are dominancy growls, telling you to back off, they are "alpha." The pup that growled made eye contact with me, his ears were back and he gave me a look that meant he meant business. He was correcting my behavior because he saw himself as alpha over me. The pup that was playing was wiggling around, jumping around, trying to bite my hand, wagging his tail and ducking himself down in an "I want to play" position.

Know yourself and your family. Choose a dog that will match you. Be honest with yourself. If you feel you are, or can be, on the meek side, be sure to choose a submissive type dog. Only choose a puppy with a dominant temperament if you know you have what it takes to be a 100% strong-minded pack leader.