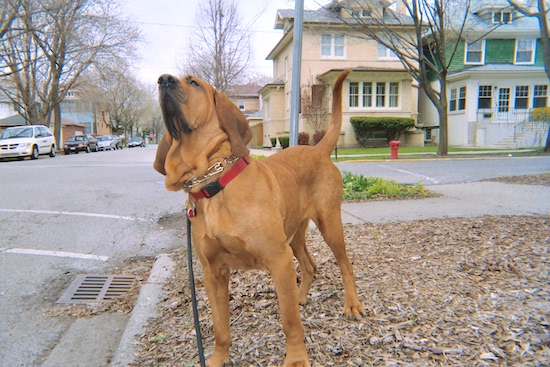 "Lulu is a 3-year-old Bloodhound who we adopted from the Midwest Bloodhound Rescue. She is the talk of the town. Lulu weighs 106 pounds. She was described as very "typy"—classic Bloodhound with extra wrinkles. Her ears are 9 inches long. According to the Guinness World Records site, the longest ears on a dog are 18 inches...on a Bloodhound.” 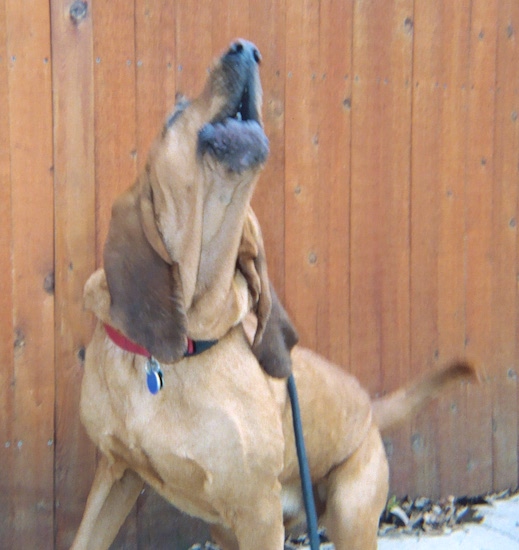 "She always smells a squirrel and gets all excited, but it can be almost in front of her and she won't spot it. She is much more focused on scent than sight, of course." 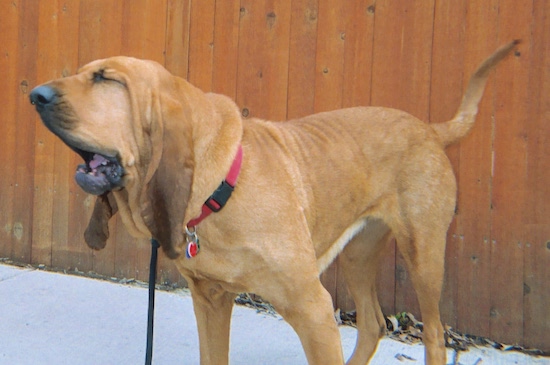 A Bloodhound’s bark sounds like a long, drawn-out bay, rather than a short bark like most dogs. 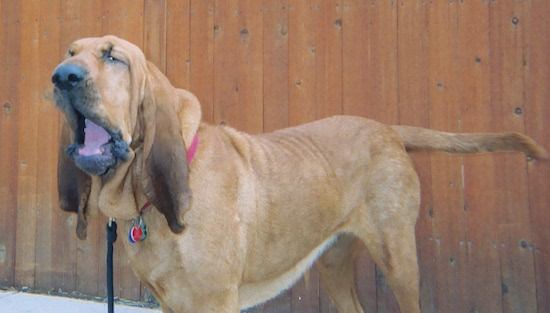 Lulu the Bloodhound at 3 years old 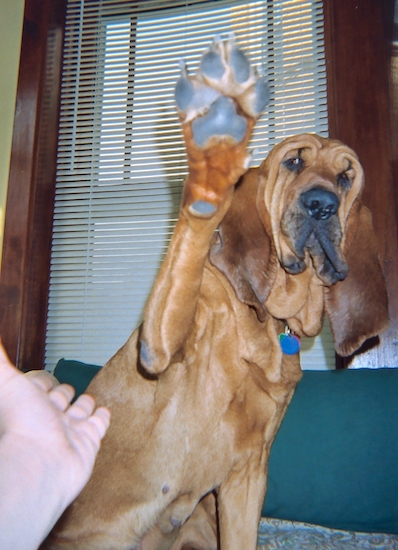 Lulu the Bloodhound—"When you ask for her paw, she lifts her arm high above her head first before bringing it back down to you. Bloodhounds tend to greet people by putting their paw on the person—it's not necessarily a gesture of dominance. She also does it to request something, like to go out." 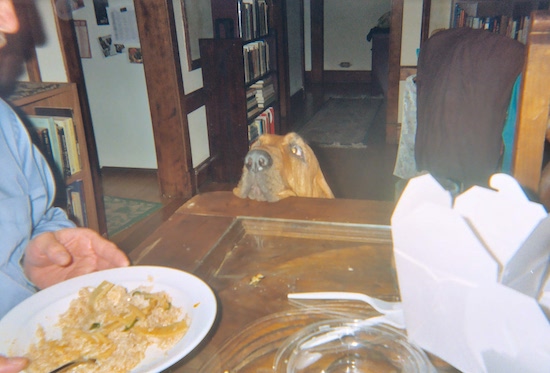 Lulu the Bloodhound wants some dinner. Look how her head reaches up on the table. 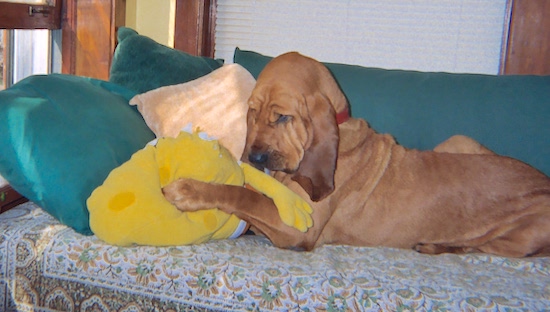 "Lulu the Bloodhound at 3 years old from Midwest Bloodhound Rescue—what a peach. She loves everybody. What a lady. She loves to rip up stuffed animals we get her from the thrift store, but knows not to touch a pillow or shoe. She's never destructive, but Bloodhounds have "rope drool," which they can shake and fling! Welcome to the world of washing walls. The ONLY thing she ever chewed—and only a little—was a disposable camera, and it was right after I had closed the door on her, shutting her out of my office when I was on the phone. Hmmmm...she was either getting back at me, or getting anxious feeling a little rejected. Bloodhounds are very sensitive, but can also be tricksters." 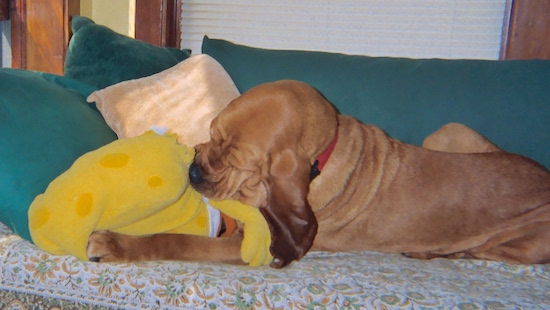 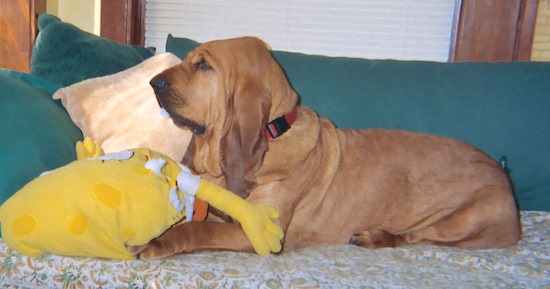 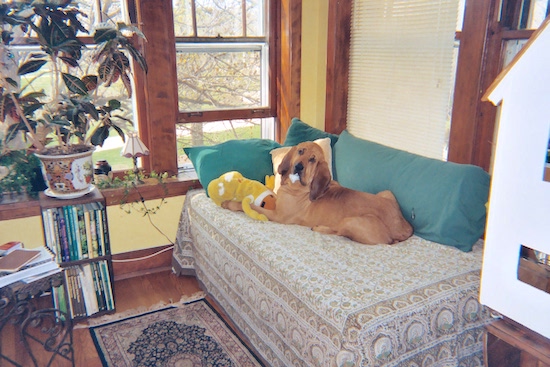 Lulu the Bloodhound—what a noble beast! 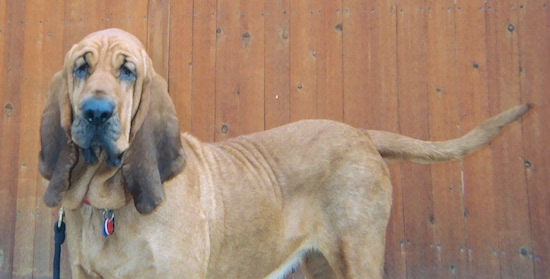 "This is what Lulu the Bloodhound looks like when she pricks up her ears." 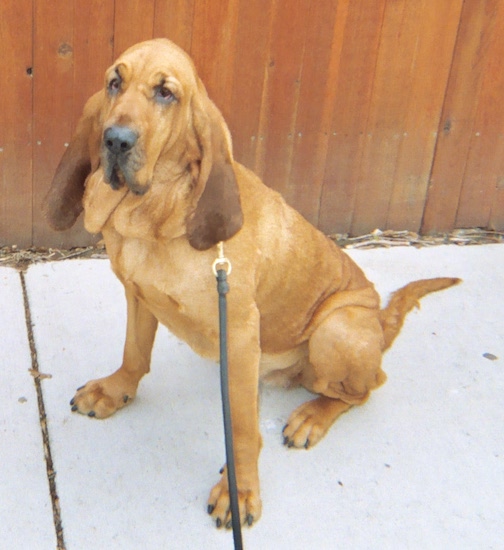 "Here Lulu's ears are relaxed down." 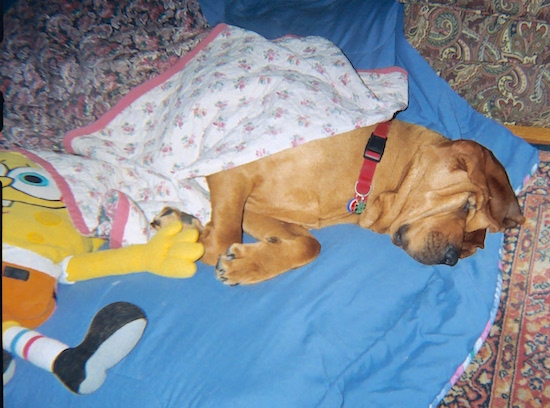 Goodnight, Lulu! She is all tucked in and ready to sleep.