Raising a Puppy: 11th week in his new home

A day in the life with Bruno the Boxer puppy. Bruno's 11th week—17 weeks old, 39 pounds, 19 inches from the ground to the highest point of the shoulders (the withers). 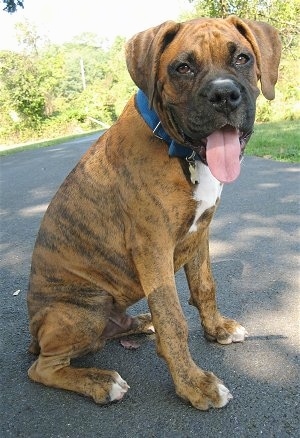 Even the kids know Bruno must sit down quietly before we set his food dish down.

Bruno must wait for all humans to enter or exit before he is allowed to go through a doorway. The kids are very good about this one. I have been noticing he stands there with a look of anticipation on his face, staring at you, waiting to be invited to come inside the house before he will take that step up into the doorway. He doesn't budge until we say "Bruno, Come." Then he scurries inside the house. What a good puppy.

We have never let our dogs upstairs or into the carpeted family room and Bruno is no exception. There are two entrances going into that room, one from the kitchen and one from the living room. There is no gate blocking the doorway and never has been, yet we do not have a problem with Bruno staying out of that room. He just does not walk in there, not in front of us anyway (I have never seen him in there). From day one as a tiny puppy, he was just not allowed and we all (kids included) made our "AAATTT" sound if he started to walk in there and guided him out. Bruno has just accepted this as part of his life. The dogs are allowed in the basement and in all other parts of the first floor except for the family room.

He also does not jump on the furniture. We have never let him. Even when he was a tiny puppy, we always sat down on the floor with him if we wanted to snuggle, so I don't think it's even crossed his mind that he CAN get on it. The dogs have their own couch-shaped dog beds on the floor in the living room.

I am amazed at how calm Bruno is. He's a Boxer, so I had been waiting for him to get hyper. That was before I started watching “Dog Whisperer.” I now realize Bruno is in a calm, submissive state pretty much all of the time. It's the way the owners treat the dog that determines how calm they will be. An owner should only share their affection with a dog when he is in this calm and submissive state of mind. This will feed that state of mind, re-enforcing him to stay calm and submissive. It does indeed work, which is wonderful for me, because this means I can hug my puppy almost any time of day! :)  Looking back, our family has owned a Pitbull /Staffordshire Bull Terrier mix, a Husky/Shepherd mix, an English Bulldog, two Great Pyrenees, and two Boxers. All have been, for the most part, calm dogs. None of them jumped on humans.

A lady stopped by the house who had never met Bruno before. When she got out of her car, Bruno approached her, walking, his entire back end wagging along with that nub of his, ears back with a slow, but happy-go-lucky look on his face. She reached down and petted him. Bruno didn't jump, he didn't puppy bite; he just continued to wag his back end, sucking up the love in a slow kind of way. I don't know how else to explain it. The lady commented he was a good puppy. It felt really good to hear that. All of this hard work is indeed paying off.

Tug-of-war with a car?? Bruno!!! I was upstairs, Bruno was outside. I just happened to look out the window when I spotted Bruno appearing to be playing tug-of-war with something under the car. He was shaking his head back and forth and pulling with all of his might. What the heck?! His head was up too high for it to have been an animal on the ground. I immediately opened the window and yelled "AAAAttttt!!" Bruno jumped as if startled and scurried away from the SUV. My curiosity was up. I grabbed my camera and went outside. Oh, this was NOT GOOD. Bruno was playing tug-of-war with a group of wires that were wrapped in a black protective tube underneath the car. I turned to him and said calmly for my own personal satisfaction, "Bruno, that was not a good boy." While I was looking at his latest destruction he walked over to the vehicle and I could tell he was going to go for it again. I moved toward him with determination on my face and in my mind, "AAAAttttt!!!!!" Bruno got the message, he left the vicinity. I tucked the wires back up under. Boy do I hope he leaves it alone. Daddy is not going to be a happy camper if he keeps this up! 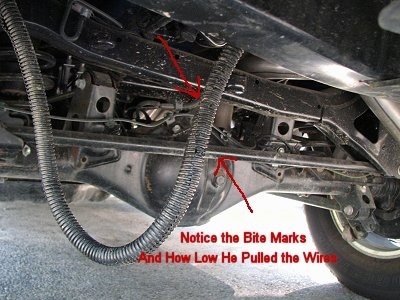 Notice the arrows pointing at the bite marks and how low he pulled the wire casing. 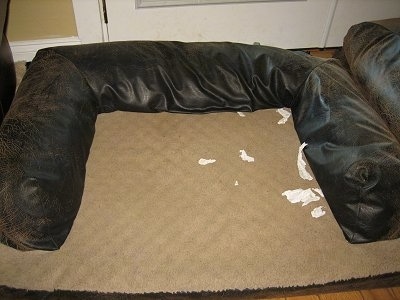 I don't even know what this is that Bruno chewed up. It looks like someone's homework. Now the question is, if one of my kids told their teacher "the dog chewed my homework," would the teacher actually believe them? Hmm... 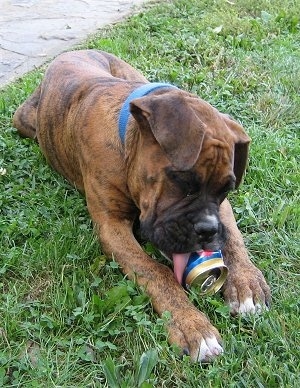 "A soda can? Bruno give me that before you cut yourself!" 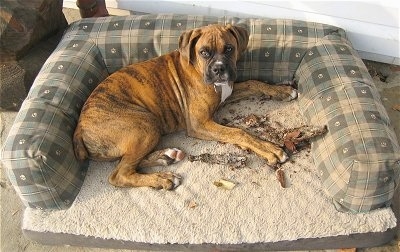 "Now Bruno, I fed you breakfast, and you ate it, so why are you eating that hunk of bark? Get off your dog bed so I can shake off that mess." 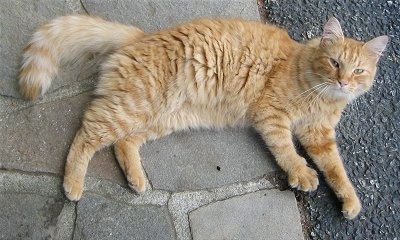 We have roughly 20 farm cats that are all very friendly and all live outside. In my past experience our dogs have always been put in their place by the cats; there was no need to intervene. Out of all of our cats, there is only one that Bruno has not gained respect for and he still tries to dominate. Yes, you guessed it, good old laid-back Waffle. Bruno was making a habit of dominating Waffle. He would do this by towering over him, then standing on top of him. Waffle would always get away and run for higher ground, where he would proceed to bat Bruno in the head with his claws in. Why he never clawed Bruno is beyond me. The cat's extremely submissive. All of our other cats put Bruno in his place early on, either by looking at him in such a way that said "don't mess with me," or by clawing at him only once, and Bruno learned not to bother them. It was not hard at all to stop Bruno from picking on Waffle. As soon as I would see Bruno approach the cat in a dominating way I would make a "PPSSSSTT" sound and "bite" Bruno in the neck by cupping my fingers out like a wide open claw. Bruno immediately responds to this. And that's it. No yelling, no chasing, just one light touch to his neck and a whispery "PPSSSSTT" sound. This has to be done at the correct moment—timing is everything—as soon as Bruno gets that look on his face and starts to look like he is going to tower over the cat. His attention gets redirected back to me and he walks away from the cat. And the best part is, Bruno is happy about it! He does not run away in fear, he simply understands what I want from him and does it.

Bruno and the Guineas 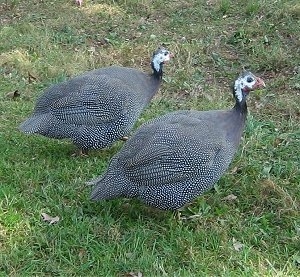 Remember the Guinea Fowl? How Bruno was starting to chase them, and I needed to take him to the birds and correct his behavior at the moment he started to go after them? Well, I have been watching Bruno, and I have not seen him go after or look at a guinea like he even WANTED to get them since. It was not easy telling Bruno not to chase those birds. I had to work on it for a couple of days, but it all paid off. So far, so good! The guineas are not high on his priority list. Bruno sits and watches them calmly or ignores them altogether