A day in the life with Bruno the Boxer: 2 years and 2 months, 102 pounds, 24 1/2 inches from the ground to the highest point of the shoulders (the withers). 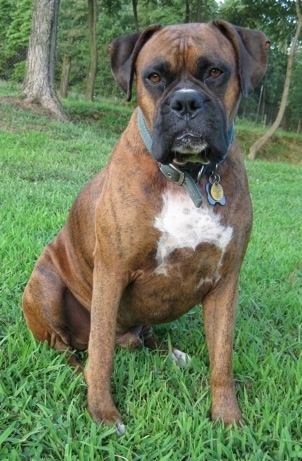 Hope I am not jinxing myself by saying this but Bruno has not chewed anything up in over a month. Maybe the pup inside him is finally growing up. :)

Bruno the Boxer, Darley the Beagle mix and Darley's new sister, Maggie. When you are trying to transform a former dominant dog into a submissive one having dogs that are already calm and submissive around them is a huge help. Dogs can feel the energy of other beings around them. Darley and Bruno help Maggie adjust much quicker and smoother by sending her some good, calm, submissive, happy vibes.

Maggie was rescued from a private rescue in Delaware. She is 30 pounds and said to be a Boxer/Spaniel mix, however her mix is only a guess at this point. Her size and body shape remind me of a Jack Russell mix, but she might also be a Pitbull mix. Her owners are going to get a canine DNA test to find out what she is. 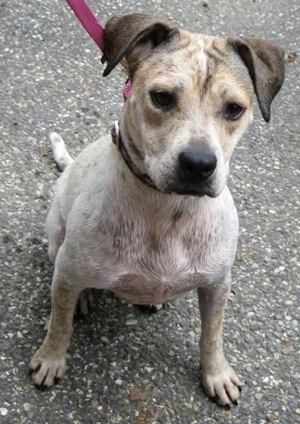 The vast majority of dogs who end up homeless because of behavior issues were not shown leadership nor given the proper amount and type of exercise. Maggie was no exception. Watching Maggie jump out of the rescue worker’s car and drag the human to the front door of the house was proof enough that this dog needed some leadership and guidance in order to make her new home a forever success.

After the rescue worker left, Maggie's new owner drove Maggie and her other dog Darley over to Bruno's house for some lessons in obedience, respect and the new pack order along with some much needed exercise. She was to no longer be trying to lead. She was going to be a follower and she was going to respect the humans around her. The exercise was going to help her brain relax. Dogs that do not get enough of the right kind of exercise go stir crazy causing them to act out and not listen to known commands. 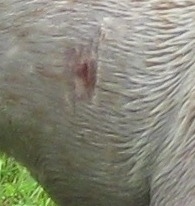 We had been told that Maggie had taken a toy from a dog's toy bin and let out a growl when another dog approached. In that particular case there was no dog fight because the other dog had not challenged her, but instead walked away. We noticed that Maggie had a cut on the side of her. I have seen my share of wounds and Maggie's cut looked to me like a bite wound. In Maggie's new life she will no longer have to worry about being the leader and having to fight for the position. She is going to be a follower and she is going to be safer and less stressed because of it.

Learning to heel on a lead is extremely important in communicating to a dog that you wish it to be respectful of its surroundings. 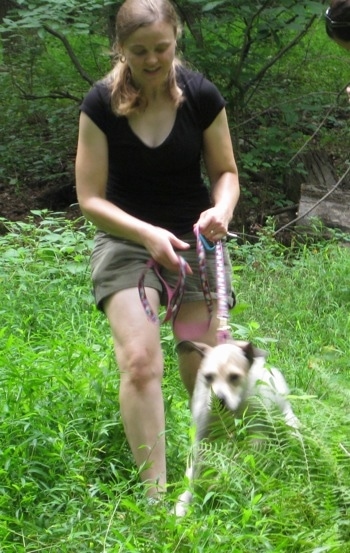 This was all new to Maggie. All her life she had been allowed to walk out in front. We were asking her to calm down, relax and follow us rather than trying so hard to lead the way. 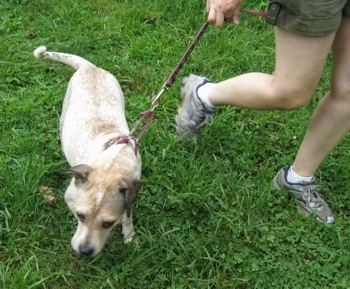 Maggie was zipping from side to side. She was not relaxed and she was not following. She was stressed and doing her doggone best to be the leader. She pulled, trying to get herself to where she wanted to be. Each time she pulled I gave a correctional tug on her lead, over and over again. 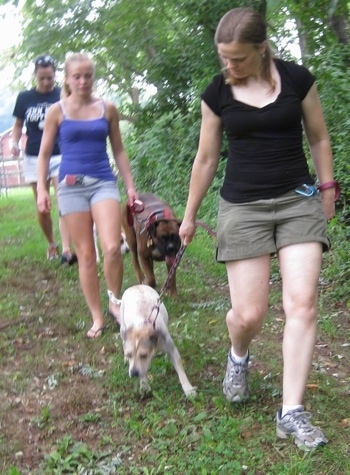 In the first couple of hours Maggie was darn determined to get what she wanted. She also had not fully understood what we wanted of her. Can you imagine if a human walked like this, always worried always stressed? It's enough to give anyone a headache! 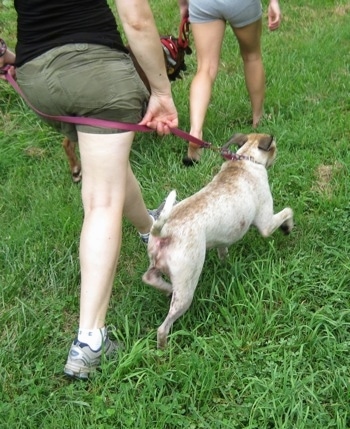 Look how tense she is. Her body is not relaxed. Her tail is rigid and held high, which is a sign of dominance. 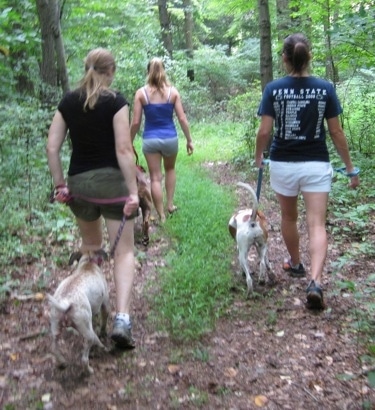 After a correction Maggie would heel for a few seconds then she would BOLT. She would run as fast as she could, choking herself as she got to the end of the lead. She wanted to pull, she wanted to be in front of all the other humans and dogs. To help stop her from this leash bolting, along with the correctional tugs, I also used my body to block her. I kept her behind me using my legs as a barrier only using a voice correction every once in a while. Dogs understand your body language much better than your words. 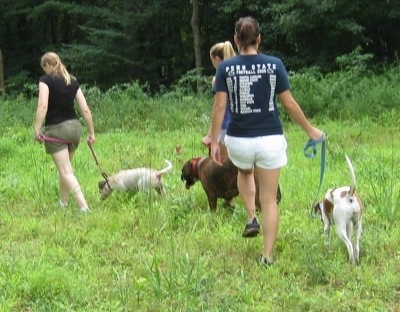 Maggie's attempts to bolt soon stopped and I let her walk beside me. 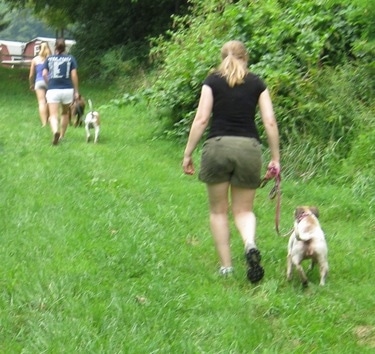 She was starting to catch on. 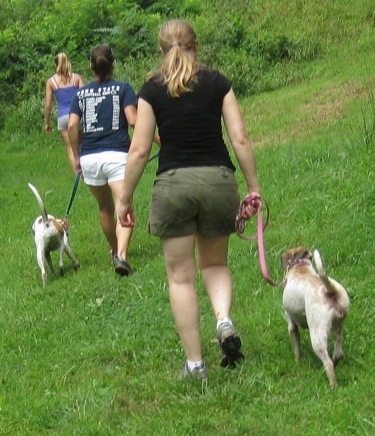 As time went on she was getting better and better at not pulling on the lead.

Learning not to bolt 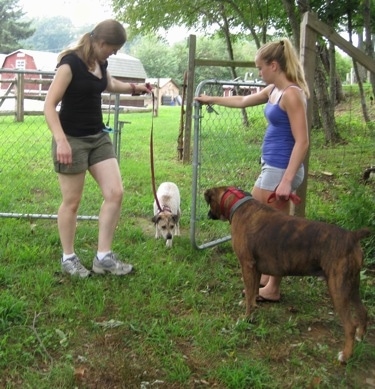 We practiced going through gates. Maggie was told that the humans go first and she is to respectfully go after they have passed. No more bolting at her free will. Bruno sends Maggie some submissive vibes which helps to calm her. 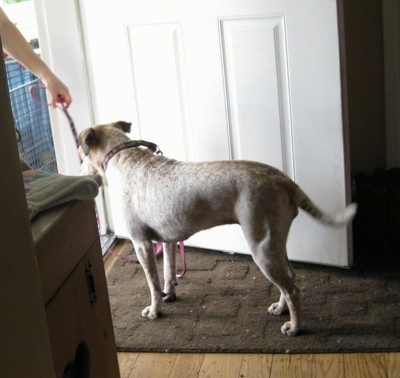 Maggie learns some respect at the front door.Just because it is open does not mean you are invited to bolt out of it. 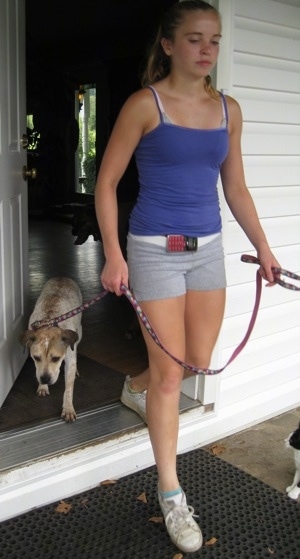 When it is time to go out the door Maggie is taught to go out calmly after the human.

Maggie learning the art of following humans instead of leading them, as she practices going in and out a doorway ”the proper way.”

Maggie gets a new collar

We walk our dogs to the local pet store to buy a new collar for Maggie. 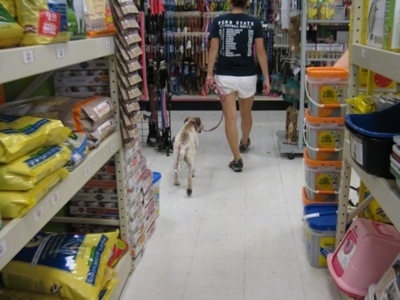 Maggie is taught that she must also heel inside this store. She follows her owner to the collar section. 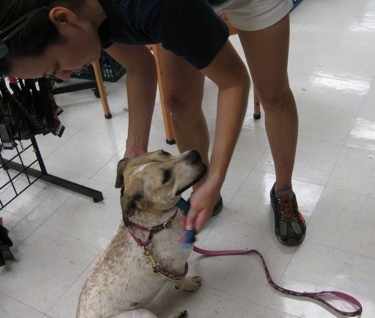 After only a couple of corrections Maggie realizes that the human’s wish is for her to stay still and not pull off to wherever she wishes. Maggie sits down and allows her owner to try different collars on her. 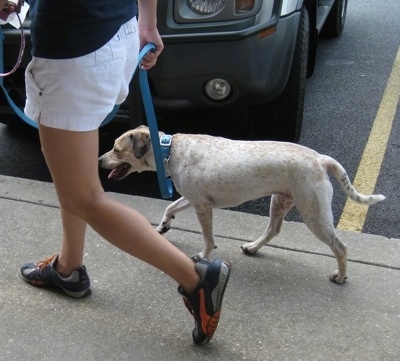 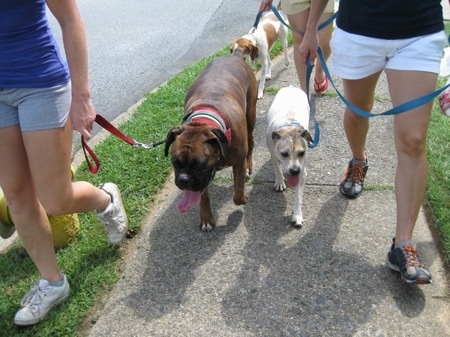 After Maggie's day of obedience/respect training she was brought back to her new home. Maggie was walked on a lead to the threshold of each room she was going to be allowed in. She was told to wait at the doorway, then she was invited in and walked around the room. As she walked politely on the lead she was allowed to smell things in the room. Her owner knew if she simply opened the door to the house and set Maggie free to explore for the first time that Maggie would instinctually claim each room as her own. A lot of owners start issues with their new dogs the first day they bring them home by allowing them to claim the house.

Maggie's owners know that what we did today is not just dog training, it's a way of life. We communicated to Maggie that she is no longer in the alpha position. In order for Maggie to be happy and secure with her new role the humans around her must always act like leaders. If Maggie senses the humans are not strong enough to keep her pack safe she will once again take over that role. In a pack of dogs there must be a leader and the strongest-minded being gets to have the position. Behavioral issues arise when they challenge one another for that role, communicating their displeasures and desires to other beings around them. When a dog is secure it can relax. This is a 24/7 way of living with your dog. Dogs cannot be sent to trainers and come back 100% trained if the owners do not uphold the communications when the trainer leaves. Dogs are all about the moment, living day to day. From this day forward Maggie is going to have a better life. The issues her former owner experienced that caused them to toss her into the pound will no longer exist. Maggie's new owners understand the instincts of the canine animal and will give Maggie what she needs to be happy and balanced. If only all dogs could be so lucky.