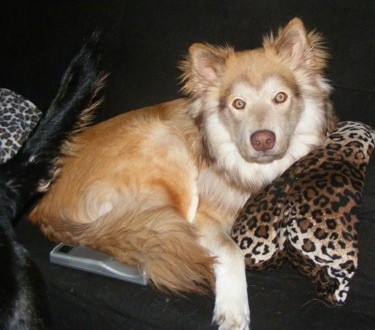 "I have a beautiful one-year-old male Coydog. He is coyote and Husky. He weighs approximately 50 pounds and is still growing, though it seems he will be a medium-height dog. His name is Cash and he is one of the most beautiful pups I have ever seen. He has piercing yellow eyes, beautifully thick red and white fur, and a pink/brown nose. He is a genuinely sweet, loving animal. He does bark, but when there are other coyotes around the farm he howls and squeaks. 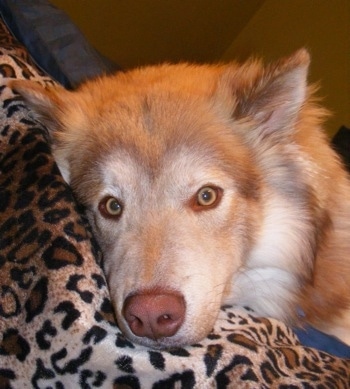 "He is one of 4 pups in our pack but the only Coydog, and is very smart and has become the "matronly" member. 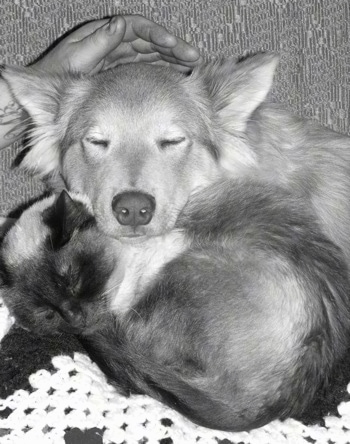 "He loves all children and any animal. He is often caught snuggling with our cat Grace... 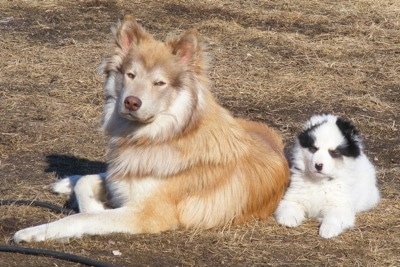 "...or carrying around our 8-week-old Border Collie puppy. He is high energy and walks well on a leash, but tends to wander when he is not leashed (selective hearing) and prefers to spend his time outside all of the time. We try to get him to sleep indoors but think he just gets too hot with all of his thick fur. I think he has a bit of separation anxiety when my husband goes to work (he is more attached to my husband), as he usually whines for about an hour after he's left for the day. All in all, he is a great animal, member of the pack and friend." 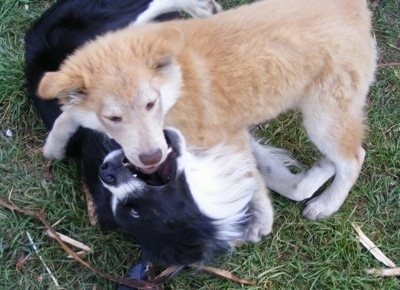 Cash the Coydog puppy playing with his Border Collie friend 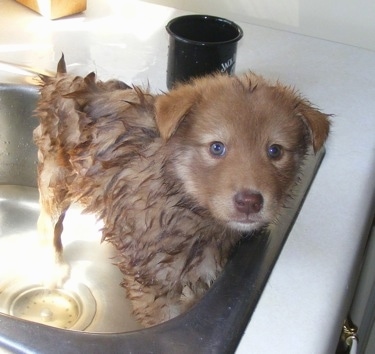 Cash the Coydog puppy getting his first bath 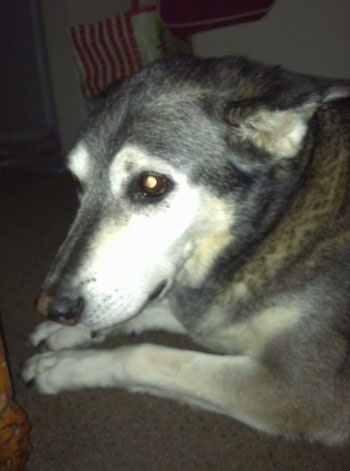 Roo the Coydog at 13 years old—"I've never really been able to say who saved who with Roo and me. She had been severely abused by her previous owner, who was my boss's (at the time) son. She hated people and ran wild on about 12 acres of farmland. For some reason she started taking an interest in me and started following me around. We eventually became friends. The day I quit she chased my truck down the driveway, so I stopped and opened the door. I told her that if she was in she was in for good, no turning back. About two years later I became extremely ill and was retired from the military and had to go on disability. I was almost completely homebound for years. Roo was with me and kept me going. Honestly, if it wasn't for her, I really don't know how or even if I would have made it through those first five or six years. She really became my life. That's been several years now, I'm doing better and Roo and I have had a great life together. But in Nov. of 2012 we got some more heartbreaking news. Roo was diagnosed with terminal bone cancer and I was told I had less than a month left with her. It's now been four months later and Roo is still going strong, surprising everyone, her vets included. She is in minimal pain, controlled by minor pain meds and anti-inflammatories but I use crystals, animal Reiki and essential oils to keep the cancer at bay. She has been the love of my life, the most amazing being I've ever encountered, her intelligence, loyalty, and capacity to love is absolutely mind boggling. She became a surrogate mother, playmate and jungle gym to more animals than I can count when I did rescue and rehab with exotics and wildlife. Only thing I had to watch around her were rabbits and guinea pigs, those were snacks to her! I've truly been blessed to have her in my life and will always consider her a guardian." 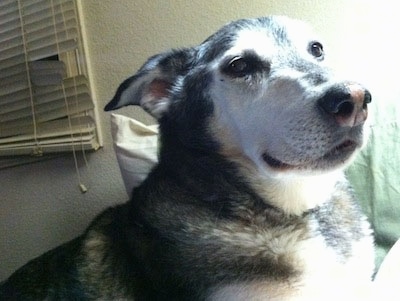 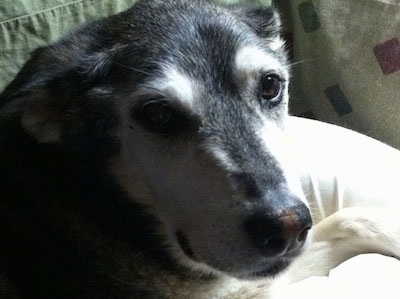 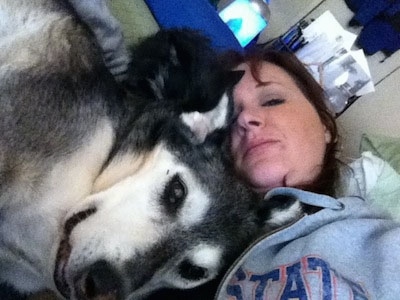 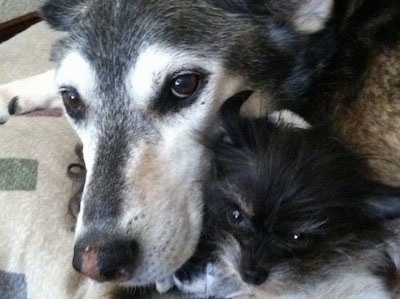 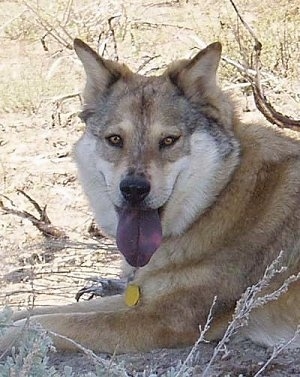 "Kaweah is half Australian Shepherd (dam) and half coyote. She weighs about 32 pounds. She has a dense undercoat which is shed once a year, and her coat feels like a pelt. She is good natured, intelligent, easily trained, although aloof, independent, and non-demonstrative with affection; her personality being very catlike. She loves kids and gets along well with other dogs, as long as they aren't aggressive towards her; with aggressive kids, she slinks away quietly; with aggressive dogs she'll stand her ground even with animals twice her size. She has never shown aggression of any sort towards people. As a pup, she began hunting insects—grasshoppers, crickets and moths, but as she matured her focus has changed to small animals such as mice, chipmunks, rabbits and squirrels, with an occasional bird. She spends all day hunting and sleeps indoors at night. We really couldn't ask for a better pet; she's the bomb." 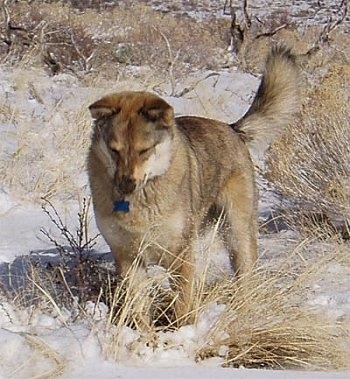 Kaweah the Coydog (half Australian Shepherd (dam) and half coyote) at 18 months, hunting in the sage brush 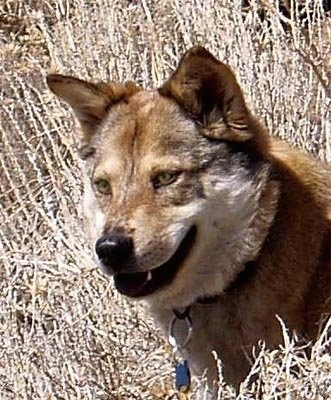 Kaweah the Coydog (half Australian Shepherd (dam) and half coyote) at 2 years old waiting patiently in the brush, intensely watching for prey 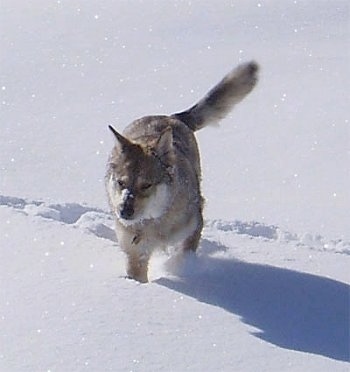 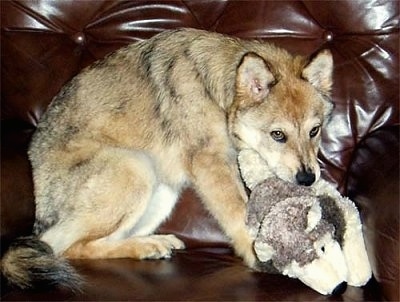 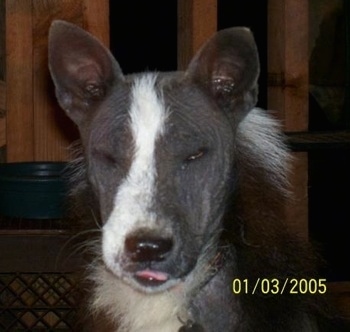 "This is my Coydog Pippy-Dog at 6 months old. She is part Xoloitzcuintle and coyote. She isn't a very outgoing dog. She is very shy (except at feeding times). She would rather be with canine companions than with humans."