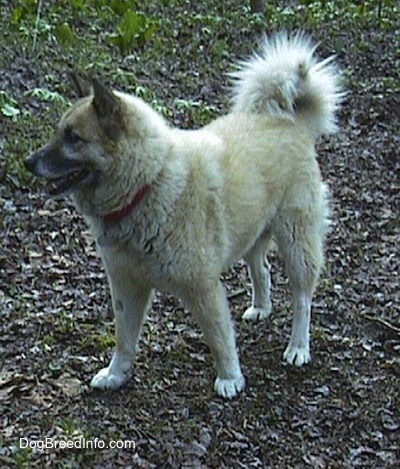 "This is Puppy aka Puppy-Dog. I know, very original huh? We named him Bear, however, never stopped calling him Puppy. The name stuck for the rest of his life. He was a Husky / Shepherd mix. He was rescued from the pound when he was about 6 months old, on his last day. When we brought him home he got car sick. We also later discovered he had epilepsy. He was as cute as a button. We figured his original owners didn't want to deal with his seizures. Puppy was a very friendly dog. He loved everyone. He liked to chase cats, but did well with our own cat. His temperament was predominately Husky. He chewed many things up well into his middle-aged years and only got better about it when he was about 5 or 6 years old. He howled like a wolf at the fire siren that would go off in our town about once a week and howled at any other type of whistle. When he was happy, he talked to us in a howling voice. He was a major escape artist. He could scale the new cedar 4-foot fence we put up for him in a single bound. He loved to wander. If we were right there with him, he'd listen and stay, so long as we were watching. If we walked away, or if he got out when we were not aware, he would wander off. Puppy lived until he was 13 years old until he unfortunately got hit by a car on one of his many great escapes."

The Gerberian Shepsky is not a purebred dog. It is a cross between the German Shepherd and the Siberian Husky. The best way to determine the temperament of a mixed breed is to look up all breeds in the cross and know you can get any combination of any of the characteristics found in either breed. Not all of these designer hybrid dogs being bred are 50% purebred to 50% purebred. It is very common for breeders to breed multi-generation crosses. 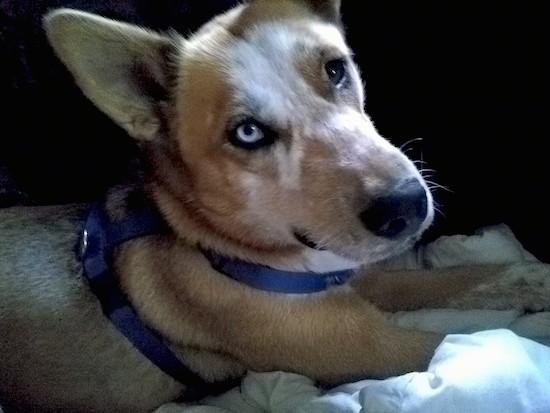 Hank, aka Hankeedoodle the German Shepherd / Husky mix breed dog at 1 year old—"I didn't know much about him got him from the animal shelter. He was abused and spoiled at the same time. He is very protective and guards us well. He senses if a person is good or evil and if they are evil he will defend and attack. He is quite the hunter as well. We had an adventure at 3am with a possum. He is relentless. He is still looking for a mouse that got away in the kitchen. I haven't seen a dog with his markings. The speckles he has are as unique as his blue eye." 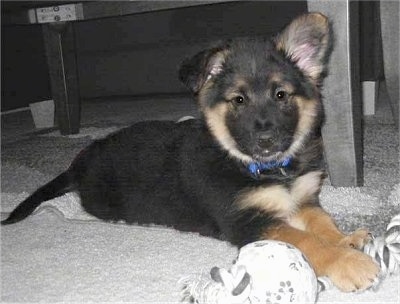 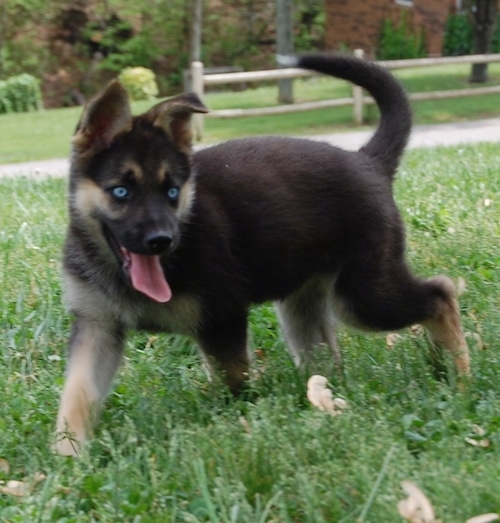 Meeka the Gerberian Shepsky as a puppy 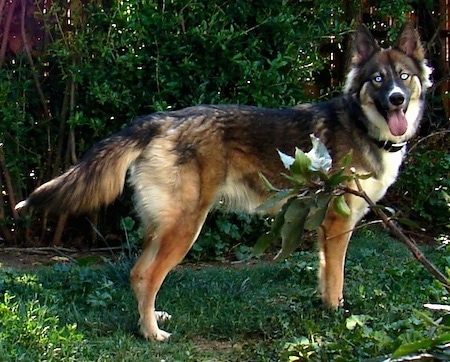 Raiya the Gerberian Shepsky at 1 year old—"Raiya would fall under the "Gerberian Shepsky" hybrid here, but I have always called her a Siberian Shepherd, Husky-Shepherd or German Husky. At one year old she is 22 inches tall at the highest point of her back and weighs 55 pounds but is still growing. Her mother was a purebred working type sable German Shepherd and her father was a purebred black and white Siberian Husky. She also had three siblings; a light sable sister with bi-eyes (one blue and one brown), a cream-colored sister with brown eyes and a black and white brother who looked like a purebred Siberian with brown eyes. Raiya's unusual color is called 'dirty faced' Sable Agouti. A few people have somehow mistaken her for a wolfdog, but her mother has not been related to one for around a hundred years when the GSD first originated from being bred back to the wolfdogs, however, she is named after Mariah, a beautiful and very loving low-content wolfdog whom my family had when I was a child. Raiya shares many of the great qualities of her namesake. She is a clever, affectionate, playful and energetic girl who loves to run and roughhouse with the other dogs. She enjoys loving on "her" cats, and she is gentle enough to happily allow even tiny kittens to share her dinner right out of her bowl as she eats. She is very social but seems to be a good judge of character; slathering certain people (including many total strangers) with her hyperactive adoration, while remaining watchful and reserved with others who are more questionable, entirely at her own discretion. She has the outgoing nature of the husky combined with the versatility of the shepherd: an excellent and very unique mix. Raiya truly is an amazing dog." 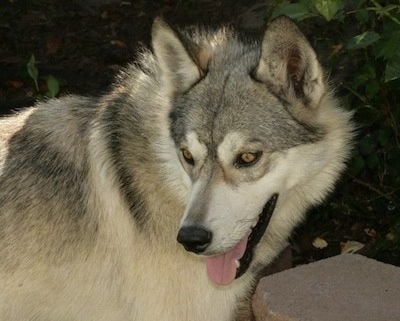 HiXael (Xael) the Gerberian Shepsky at 1 year old—"I got Xael when he was three months old from a "rescue" that had "wolf hybrids." Not being educated, I believed her. I had rescued my other dog Snow from the same place, who was also mistaken for a wolfdog. I got Xael being told he was "97% Timber Wolf and 3% Malamute." He was neither. He's Husky and German Shepherd mix. Though he was very, very difficult to handle and manage, I can assure you it was him just being a Husky! Nothing about his behavior was done in a "wolfy" intensity at all but he was VERY destructive. He literally never ran out of energy. Even taking him bikejoring didn't help! Xael was involved in a hit and run Dec. 11th. I went a couple months in just pure shock and my mental state started to affect my life daily. Before Xael died, and before he was neutered, he had an accidental litter that I didn't find out were even his until they were already several months old. After his death, one of the owners of his pups gave up their girl of his so I got her, got her fixed, and started rehabilitating her as much needed." 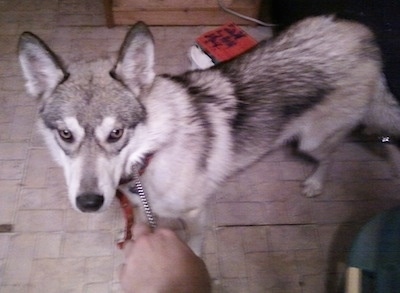 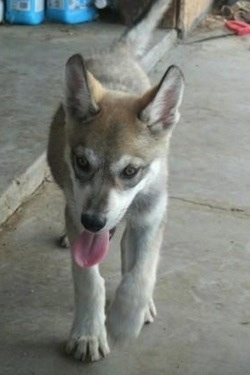 HiXael the Gerberian Shepsky as a puppy at 3 months old 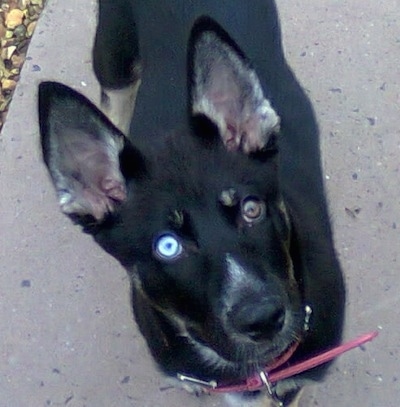 "This is Cleo. She's my 4-month-old German Shepherd / Husky mix. She is a very energetic, loyal, loving and comical puppy who loves to dig, fetch, and is very quick to learn all new tricks! She has 2 different coloured eyes. She gets her blue from her Husky mum, and her brown from her German Shepherd dad. She has lots of energy so I give her two 1-hour walks in the morning and at night and she has lots and lots of toys to keep her busy in the house. She is an amazing mix and I love to see the 2 different breeds come out in her personality."

Cleo the Gerberian Shepsky at 2 years old—"She's coming out of her puppy chewing stage and is becoming a more loving dog every day. She still loves to dig and can run for miles!! We have a cat now also that she adores and loves cuddles with her before bedtime! She is very clever and can get through any doors, cupboards, fridges and so much more, and will even steal and hide my keys or bag before I go to work in an attempt to stop me leaving. She trains so well and knows more tricks than I can count on my hands! She also picks up on other animal sounds and attempts to copy them, even an Alaskan Malamute's howl! She loves other dogs adn animals, and even toys; she will mother them all." 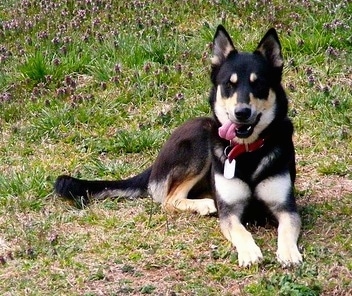 "This is Lucy, my Siberian Husky / German Shepherd mix. We lovingly call her a "Shushsky." Lucy turned 2 in December, and is the sweetest dog I've ever encountered. She has never met a person she doesn't like, and loves to give kisses. She is smart, and learns tricks quickly—it only took her about an hour to learn "speak!" Her voice is more of a "Wooooo" than a bark or a howl, and if you talk to her, sometimes she'll talk back. Lucy's best friend is Evie, a Bloodhound, who is something of a surrogate mother to her. Lucy is always up for playing with other dogs, people, or just by herself. She has a passion for squeaky toys, and we have several toys that she's worn the squeaker out of.

"Lucy is still in her puppy stage, but she's never been a biter or a jumper. Her only bad habit is locking herself in the bathroom by accident—we assume she's managed to paw the lock shut! She does have a tendency to chase the other dogs, and often she wants to play when they want to rest. She walks very well on a leash, and will even walk beside me off-lead occasionally."