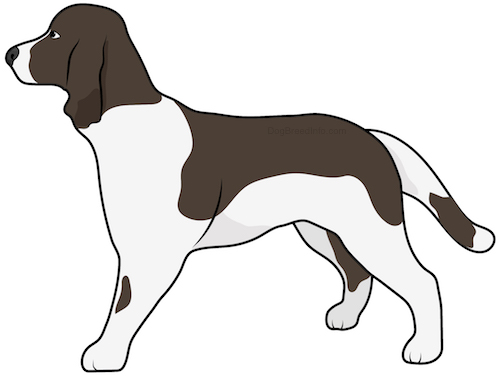 The Norfolk Spaniel had many appearances since it was always crossed with other breeds. Today, we can say that the Norfolk Spaniel looks identical to today’s modern Springer Spaniel with a white coat and liver spots. Originally, the Norfolk Spaniel could have also had spots of red, black, or brown. This breed also had similarities to the English Setter, saying that the Norfolk Spaniel was bigger boned than other spaniels and may have been a more stocky dog. They were around 17–18 inches tall and were weighed an average of around 40 pounds. Their coats were a medium length and their fur feathered at the ears, chest, and stomach.

This dog was very loyal and affectionate to their family. They would often have separation anxiety when left alone and were known to be difficult to train. Some say they were known for barking a lot, being disobedient, and sometimes had outbursts of aggression.

Although there are no records for health issues on this extinct breed, they probably would be prone to hip dysplasia, a disease called PRA which affects their eyes, a blood disorder, and/or epilepsy.

Norfolk Spaniels would have done well in any living size as long as they get enough exercise. They were known to adapt well to both city living and rural areas.

These dogs were relatively easy to exercise as they only needed a regular walk and a space to run and explore every once in a while. They were mainly used for bird hunting so they loved to adventure in new places.

This dog is extinct and there are no records of its life expectancy although they probably lived around 11–14 years.

This dog is extinct and there are no records of its litter size although they probably had anywhere around 4–10 puppies.

The Norfolk Spaniel was used as a gun dog and a bird dog, able to chase birds out of their burrows. This breed is known to be the most similar to the original Spaniel breeds in the British Isles and possible Europe’s oldest gun dogs. These dogs were a small to medium size and had a longer coat around their ears and stomach. Since the Norfolk Spaniel has been around longer than records have been kept on these dogs, not too much is known about them.

Because the name spaniel translates to “Spaniard” and “Spanish”, many assume that they originated from Spain. This theory is false because spaniels were popular long before Spain was ever a kingdom. Spaniels were around in France and England in 1066, when the land that is now called Spain was divided into multiple countries. The more believable translation of the word Spaniel is that is translates to “Hispania” which was a Roman Province that was in the same spot where Spain is today.

Another theory that can be debunked is that the Spaniels originated from East Asia. This was a popular theory because there are a few dogs that resembled the English Water Spaniel such as the Tibetan Spaniel and the Japanese Chin. This theory is false as recent DNA tests have concluded that the dogs in East Asia and the Spaniels from Europe are not closely related.

Spaniels were originally used as hunting and working dogs and were commonly thought to be from Ancient Celts and that the Welsh Springer Spaniel was the original Spaniel.

Records show that during the Roman period, Britain's main exports were medium to small hunting dogs. There is no record of what kind of dogs these were, but many experts say they were Spaniels, while others claim that they were Beagles or Terriers. In any case, Spaniels were around where ever there was Celtic influences, especially in the British Isles and in France. Since Spain was inhabited by many citizens who were related to the Celts, called Celtiberians, it could be possible that they are in fact from the area that is now Spain.

The most believable theory has to do with the Saluki breed which were known as the dog of the nobility in the Middle East. The Saluki was similar to the Spaniels in appearance because of the longer fur on their ears and tail. The theory is that Crusaders may have brought this dog all over the continent, someone may have been visiting Spain at the time and mistaken the Saluki for being Native to Spain, naming them the Spaniel.

Spaniels became extremely popular and common throughout Europe and the world. In the beginning, Spaniels were all one distinct breed but before long there were different varieties of Spaniels depending on where you traveled or what area you lived in. One of the first separations of the breed was in Western Europe and included one toy sized breed for wealthy families and one for hunting, closer to the original breed. England divided their Spaniels into land dogs and water dogs, both used for hunting. Water Spaniels were said to be crossed with either collies or poodles because of their matching traits with those breeds.

There may have been many varieties of Spaniels starting in the 1600’s. Land Spaniels were described as being mostly white with possible red spots on their fur and having long ears that flowed as they ran. These Land Spaniels became the most popular throughout Europe. There were also other descriptions of the same Land Spaniels having black fur and white spots usually on their feet, chest, and stomach.

As the only breed kept by both the lower class and the upper class, the Land Spaniel was immensely popular for centuries, used for hunting birds. Land Spaniels also traveled with settlers to new regions and was brought to America on the Mayflower. Sometime around either the 16th or 17th century, new breeds were derived from the original Land Spaniel. This breed was known as the Setting Spaniel and helped to develop further Spaniel breeds later on.

The first record keeping system for the Spaniels began in 1812 starting with the Springer Spaniel and then attempts at creating other breeds were started. The first attempt was the Shropshire Spaniel. The second attempt at a new breed was the Norfolk Spaniel. Theories say that the Norfolk Spaniel was made by the Duke of Norfolk by breeding the Black and Tan Terrier with the Land Spaniel although no one can confirm this theory. Later in the 19th century, the Duke of Norfolk said that he was not the one who developed the norfolk Spaniel. More theories were thought of including that the dog either earned its name because it was developed in Norfolk or because it was most popular in that region. The Shropshire Spaniel was said to either be a very close relative of the Norfolk Spaniel or the same dog with two different names. No one can confirm this. 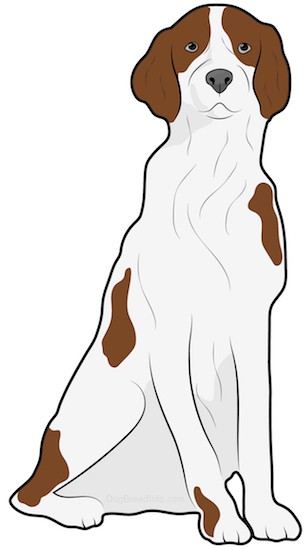