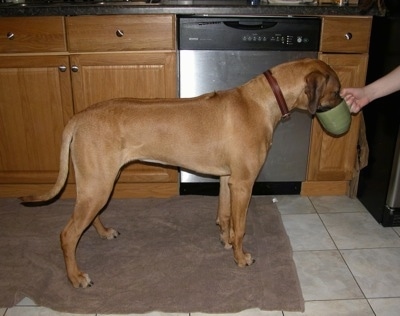 "Chimera, or Ky for short, the Rhodesian Ridgeback at 7 months old—Chimera weighs in at about 73 pounds at 7 months of age and is 25 inches tall. She has three crowns on her ridge which is a disqualification for show but that doesn’t matter, we love her so much. She loves to play, especially with other dogs and gets along well with people, too. She is not as standoffish as I was told RRs usually are; she likes people petting her, stranger or friend. She loves to get a bath and go on walks (she needs at least a half-hour walk/romp a day). We have taken her hunting and though she has not shown any desire to retrieve she will chase game if given the chance. She also has no fear of the sound of any gun. She has no fear of anything at all—vacuum, loud noises, cars flying by when we go on walks, other dogs, lawn mowers, sprinklers, and she only barks if something sounds out of place and 'wrong.'" 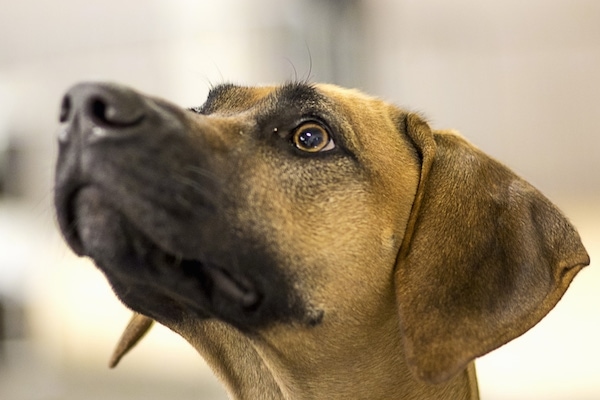 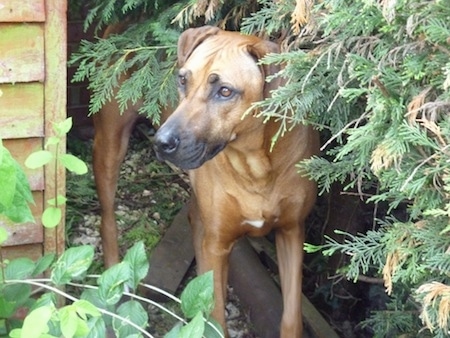 "Kiara is a female Rhodesian Ridgeback shown here at 7 years old. She loves water, snow and anything edible! She is very slobbery and likes to get up on the sofa when no one's looking. She is the sweetest, friendliest dog we've ever had, although she has a loud, intimidating bark." 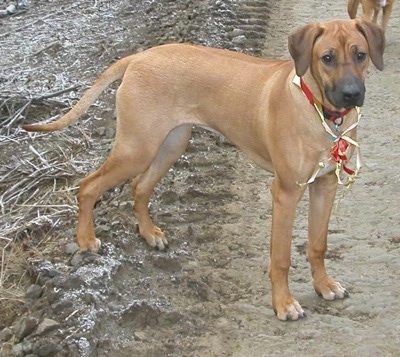 Chimera the Rhodesian Ridgeback at 7 months old—"I have applied Cesar Millan’s philosophy of being the “pack leader” while training her. With all dogs, especially Rhodesian Ridgebacks, you must be the pack leader or they will walk all over you. This breed is not for the timid or shy person; you must be in command, you must keep your dog in check (they will test you; trust me, they are very smart), and you must not lose your temper and treat the animal harshly. Confidence is the key. With Ky, I never let her out the door before me, I never let her walk on a leash and drag me or even walk ahead of me, she doesn’t lie on the couch, she eats after me, and when I call her, she knows I expect her to listen and she does. In return, I give her the most important things she values: leadership, my time, my praise and lots of good treats (this is a very food-motivated breed, watch out for obesity)! If you display confidence and have an in-charge attitude, they will respect and listen to you much, much better. Harsh treatment of this breed will only backfire; positive reinforcement is a must. They also respond well to a clicker. Reliable recall is one of the most difficult things to teach a Ridgeback. I have worked and worked on this with Ky and she is pretty good, but since this breed is a sighthound, their nose is constantly into things. They will chase what runs and eat what smells different; I have pulled some of the weirdest and grossest things out of Ky’s mouth :)." 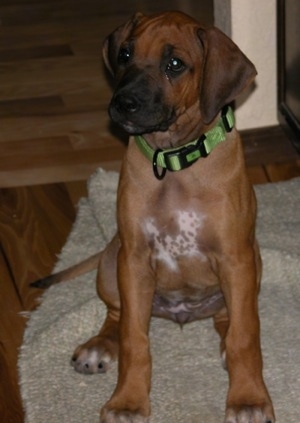 Chimera the Rhodesian Ridgeback as a puppy—"I most definitely feel that my dog is a balanced canine; she is good with people of all ages, she loves kids, does wonderfully with my 12 pet rats, but she is also very aware and protective of me and my family. She is not aggressive, just protective; there is a difference. She is very smart and loves to be challenged; she fits very well with our family and is the perfect dog." 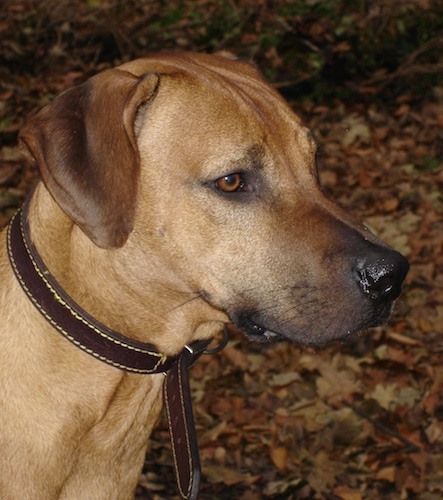 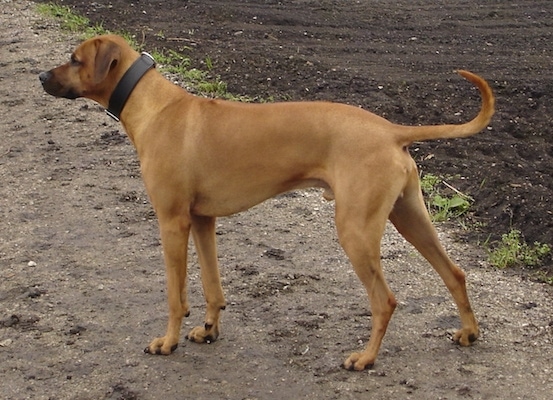 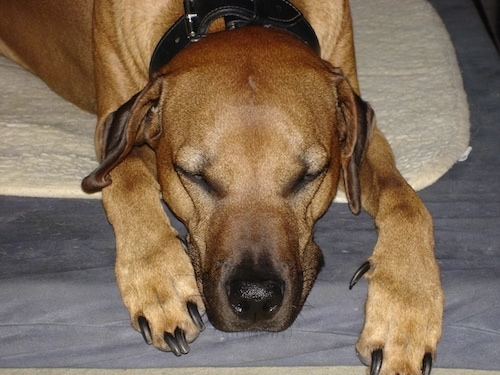 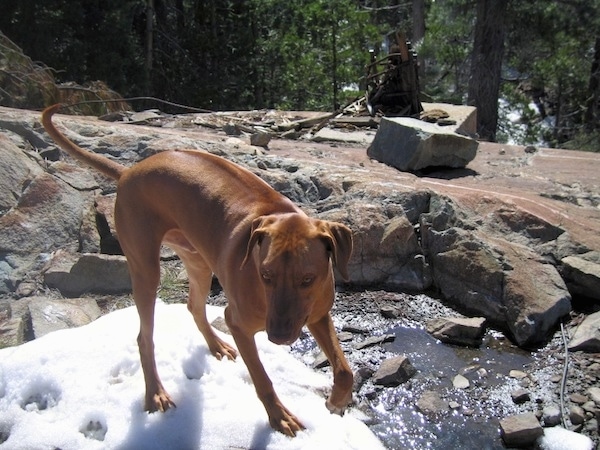 Shisma, a liver-nosed, red wheaten Rhodesian Ridgeback at 3 years old—"Shisma at my dad's house in Lake Tahoe...he loves it there because he gets to be "naked" and doesn't have to wear a leash or even a collar!" 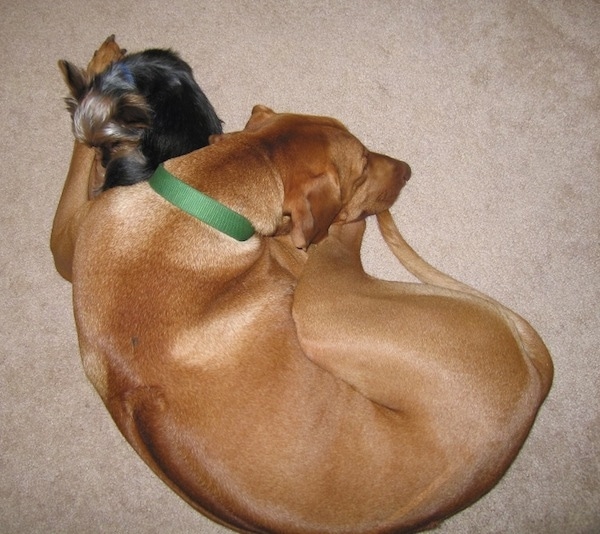 "Shisma the Rhodesian Ridgeback and Neelix the Yorkshire Terrier sleeping on the floor... the best friends are usually curled up together when asleep." Notice the ridge of hair going down the back. This strip of hair is going in the opposite direction from the rest of the hair. This is Kito, a Rhodesian Ridgeback puppy. Photo courtesy of Rose Bednarski Wyatt the Rhodesian Ridgeback at one year old, weighing 80 pounds laying down in the grass. Wyatt the Rhodesian Ridgeback at one year old, weighing 80 pounds Rugger the Rhodesian Ridgeback at 10 months old doing what he does best—resting up on the couch! Rugger and Brandi, just being Ridgebacks Rugger the Rhodesian Ridgeback is a little over a year old in this picture and still just as silly as ever :) This is Brandi the liver-nose Rhodesian Ridgeback at 5 years old. She is always up to something. Rugger the Rhodesian Ridgeback at 10 months old loves smelling pretty flowers, as you can see. Rhodesian Ridgebacks wearing their pajamas and ready for bed! Juba is in the foreground and Thoko is in the background.