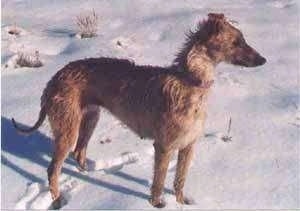 An example of a "shag" Staghound, photo courtesy of Running Sage Staghounds

The American Staghound is not recognized as a breed, but is a type of sighthound that is used to pursue (course) a variety of quarry (game). Although it is not recognized as a breed, some "lines" have been bred together longer than some recognized modern breeds. The best way to visualize the American Staghound is to blend together the characteristics of the Scottish Deerhound with the Greyhound. This is a running dog with the physical characteristics that would be referred to as the Greyhound prototype. It has long legs, a deep chest and strong muscles. The Staghound has great visual acuity, and some have been bred for some scenting ability while on course. It can be found in any assortment of color or color patterns that can be found on the Greyhound and Scottish Deerhound. There are three coat types: the "shag," which more closely resembles the Scottish Deerhound; the "slick," which more closely resembles the Greyhound; and the “broken,” which is in between the two. The American Staghound has all of the physical and mental characteristics needed for running down its quarry. It is known for having speeds that approach that of a Greyhound, but unlike a Greyhound, some specimens have incredible endurance.

The Staghound is very calm around the home. It craves the attention of humans and is very affectionate with its owner. Although this dog is primarily used for coursing quarry, the American Staghound makes a wonderful companion. In recent years there appears to be more interest in the Staghound as a pet. It is good with children, but its size can pose a problem with the young. Most Staghounds are wonderful watchdogs due to their excellent vision, but they are not guardians or protective. Staghounds are very fast but are not hyperactive. To some people the Staghound even appears to be a bit lazy around the home once mature. The coursing instinct in the American Staghound is unsurpassed, so anything that runs may be considered quarry. In the field this dog is courageous, tenacious and very determined to course anything from a rabbit to a deer. The Staghound is pack oriented so it may accept other dogs he knows, but pets such as cats are a challenge that may not ever be overcome, however other Staghounds live happily with cats. Staghounds throughout history have been bred for one purpose, TO HUNT! Only the best hunters are bred, therefore even puppies raised in a home grow into some very strong hunting instincts. Most Staghounds are used for hunting predators, not prey. Rather than hunt something like a rabbit that will not fight back when caught, they are instinctively hunting something like a coyote that acts like a wild buzzsaw when caught. They have to be muzzled when unsupervised or running off leash. They require a special pen to keep them separate from the other animals when the owner is not able to supervise. The objective in training this dog is to achieve pack leader status. It is a natural instinct for a dog to have an order in its pack. When we humans live with dogs, we become their pack. The entire pack cooperates under a single leader. Lines are clearly defined. You and all other humans MUST be higher up in the order than the dog. That is the only way your relationship can be a success.

There are no known genetic health problems. Being bred for countless generations for function, the American Staghound is very healthy. Due to its low percentage of body fat to muscle ratio, the Staghound is sensitive to anesthesia. It should not be run after eating a big portion of food due to torsion bloat concerns.

Not an apartment dog, but can do well in an urban setting if given time to exercise in a fenced-in yard or taken on walks. Best suited for rural areas. The shag variety can acclimate to harsh winter conditions, while the slick requires extra attention during cold winters. Most are kept outdoors, but all prefer the comforts of living in the home.

The Staghound requires daily exercise to mature physically and mentally. It lives to run and should have a place to run free. The Staghound would be a perfect companion for a person who jogs or rides a bike often, assuming the dog is over 12months. Do not overwork dogs that are 12months and under as their bones are still developing. Daily pack walks are essential to satisfy the instincts of any canine.

12-14 years or more if properly cared for. A true, confirmed story of one particular Staghound states that a male sired two litters at 16 years of age!

Just a periodic brushing from time to time, depending on type of coat.

The American Staghound is primarily the result of Scottish Deerhound and Greyhound genetics of unknown genetic percentages. For the most part, the Staghound has been bred Staghound to Staghound since the 1800s, but excellent hunting first cross Greyhound / Deerhound dogs are still added to the breed. It is not the direct progeny of a pure Scottish Deerhound crossed with a pure Greyhound. When America was settled, the Greyhound, Scottish Deerhound, and possibly their crosses found their way to the New World. Coursing quarry was used for sport, food and fur. For the first time ever, the coyote was coursed with running dogs. Coursing dogs have been used for wolves in other countries as well as in America, but the coyote posed a new challenge. The coyote is faster than the wolf, and pound for pound fights as hard as a wolf. Over the course of settlement and westward expansion it was found that the cross between the very fast, fine-boned Greyhound with the more robust Scottish Deerhound gave a mighty fine coursing animal used for coyote in difficult terrain. The Scottish Deerhound also contributed his rough jacket and better scenting abilities. Staghound was bred to Staghound and was most often culled specifically for characteristics that favored the pursuit of coyote. A few hundred generations of this sort of breeding led to what many refer to as the epitome of coyote-coursing sighthounds. In essence, the American Staghound was born. General George A. Custer used the Staghound as part of his dog pack that he used to course on a variety of North American animals. The Staghound has always been in the hands of huntsmen, and without the right to pursue quarry with running dogs the Staghound will go extinct.

The American Staghound is not recognized as a breed, although it has been around longer than some of the modern recognized breeds. It has always been bred for function and not for type. There are no breed standards, and currently there is no movement to push the Staghound into breed recognition. Most huntsmen believe that the Staghound should be left unrecognized as a breed so it will be preserved as a coursing animal bred for work and not for show. 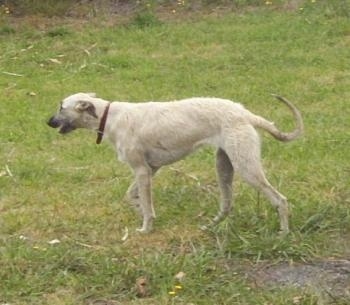 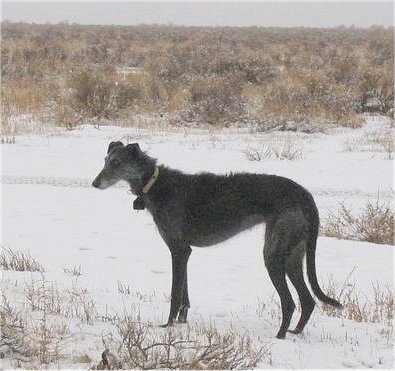 Rosa the American Staghound in the snow 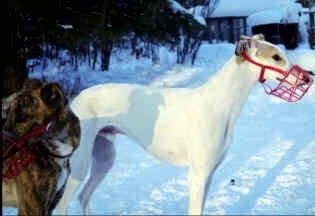 Staghounds should wear a basket-type muzzle when running off leash (alone or with other animals?).... Alone, because you never know when someone else's dog is going to come running out of nowhere... With other animals simply because they will go after even the other dogs they live with. 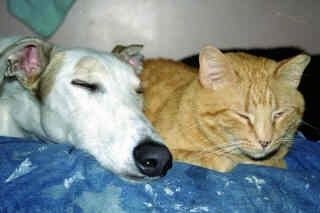 A Staghound may be friends with a cat, but this same dog contently sleeping with the cat will still chase and kill a cat or dog. It has a strong instinct to chase and kill things that are running. Staghounds are not being mean when they chase and kill, but simply following their instinct.

See more examples of the Staghound