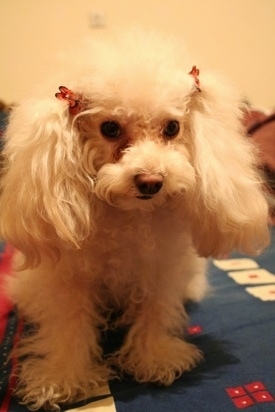 The Teacup Poodle is an unofficial size variation of the Poodle. It is, in reality, a Toy Poodle, but is smaller in size than the AKC Toy Poodle standard. Breeders are purposely breeding them accordingly. Teacups are common in the States. They tend to be 9 inches or smaller, and under 6 pounds in weight. The Teacup Poodle is just a name given to very small Poodles by breeders, and therefore, there is no universal standard for those who are breeding them.

When groomed to show dog standards the body is meant to give off a square appearance. It has approximately the same length as the height at the withers. The skull is moderately rounded with a slight but definite stop. It has a long, straight muzzle. The dark, oval-shaped eyes are set somewhat far apart and are black or brown. The ears hang close to the head and are long and flat. Both the front and back legs are in proportion with the size of the dog. The topline is level. The tail is set and carried high. It is sometimes docked to half its length or less to make the dog look more balanced. Dewclaws may be removed. The oval-shaped feet are rather small and the toes are arched. The coat is either curly or corded. It comes in all solid colors including black, blue, silver, gray, cream, apricot, red, white, brown or café-au-lait. While it does not make the written show standard, some breeders are breeding parti-colored Poodles. See grooming for different types of Poodle clips.

The Teacup Poodle is remarkably intelligent. Highly responsive, it is said to be one of the most trainable breeds. Sweet, cheerful, perky and lively, it likes to be with people. Delightful, very amusing and keen. Socialize them well. They make a very good watchdog for their size. Without the proper type and amount of exercise they may be high-strung and timid. If the human is not 100% pack leader, they may snap if they are teased or surprised. Toy Poodles are generally good with other pets and dogs. Unless given rules to follow and limits as to what they are, and are not allowed to do, this breed will tend to bark a lot. Do not let this small dog develop Small Dog Syndrome, human induced behaviors where the dog believes he is pack leader to humans. This causes varying degrees of behavior issues, including, but not limited to snapping, growling, guarding, demanding, untrustworthiness with children and sometimes adults, sensitive, nervous, reserved with strangers and obsessive barking, as the dog tries to tell the humans what it is HE wants THEM to do. This little dog can be good with children, however is usually recommended for older children who know how to display leadership skills. The reason is that most humans treat the dog in such a way that makes them unsure just who the pack leader is in the human dog relationship. The dog, in his own mind, is convinced HE is the leader to humans. These are NOT Tea Cup Poodle traits, but rather traits brought on by meek owners. Make sure you are your dog’s firm, consistent, confident pack leader, providing daily mental and physical exercise in order to have a trustworthy, mentally stable dog.

A long-lived breed, Poodles are, nevertheless, subject to many genetic diseases. Some are prone to IMHA (Immune Mediated Hemolytic Anemia), slipped stifle, diabetes, epilepsy, heart disorders, PRA, runny eyes, ear infections and digestive tract problems. Eye problems such as cataracts and progressive retinal atrophy which can cause blindness. Skin conditions, possibly due to unskilled use of clippers. Brown Poodles tend to become prematurely gray. Allergies are common, sometimes to shampoo and/or color reinforcer.

The Teacup Poodle is good for apartment life. It is very active indoors and will do okay without a yard.

Teacup Poodles need a daily walk. Play will take care of a lot of their exercise needs, however, as with all breeds, play will not fulfill their primal instinct to walk. Dogs that do not get to go on daily walks are more likely to display behavior problems. They will also enjoy a good romp in a safe, open area off lead, such as a large, fenced-in yard. They adore water and love sessions of play.

Poodles must be bathed regularly and clipped every six to eight weeks. Clean and check the ears frequently for wax or mites or infection and pull out hairs growing inside the ear canal. The teeth need regular scaling. Since the coat does not shed it needs to be clipped. There are several different types of Poodle clips. The most common for pet owners is an easy-care clip called a "pet clip," "puppy clip" or "lamb clip" where the coat is cut short all over the body. Popular show clips are the English saddle and the Continental clip where the rear half of the body is shaved, bracelets are left around the ankles, and pom-poms are left on the tails and hips. The AKC standard allows for a dog under a year old to be shown in a show style puppy clip which has special requirements such as a pom-pom on the end of the tail. Other clip styles are the modified continental clip, town and country clip, kennel or utility clip, summer clip, and the Miami of bikini clip. Poodles shed little to no hair and are good for allergy sufferers.

The Poodle has been known throughout Western Europe for at least 400 years and is depicted in 15th century paintings and in bas-reliefs from the 1st century. The subject is controversial of where the dog was officially developed and no one really knows the breed’s true country of origin. France has taken a claim on the origin, but the AKC gives the honor to Germany, where they say it was used as a water retrieval dog. Other claims have been Denmark or the ancient Piedmont. What is certain is that the dog was a descendant of the now-extinct French Water Dog, the Barbet and possibly the Hungarian Water Hound. The name "Poodle" most likely came out of the German word "Pudel," which means "one who plays in water." The "Poodle clip" was designed by hunters to help the dogs swim more efficiently. They would leave hair on the leg joints to protect them from extreme cold and sharp reeds. The hunters in Germany and France used the Poodle as a gundog and as a retriever of waterfowl and to sniff out truffles laying underground in the woods. The French started using the breed as a circus performer because of the dog's high intelligence and trainability. The breed became very popular in France, which led to the common name "French Poodle," but the French people actually called the breed the "Caniche," meaning "duck dog.” The Toy and Miniature Poodle varieties were bred down from larger dogs, today known as Standard Poodles. In the 18th century smaller poodles became popular with royal people. The three official sizes are the Toy, Miniature and Standard Poodle. They are considered one breed and are judged by the same written standard but with different size requirements. Breeders are also breeding an in-between size called a Klein Poodle (Moyen Poodle) and a smaller Teacup Poodle. Some of the Poodle's talents include: retrieving, agility, watchdog, competitive obedience and performing tricks. 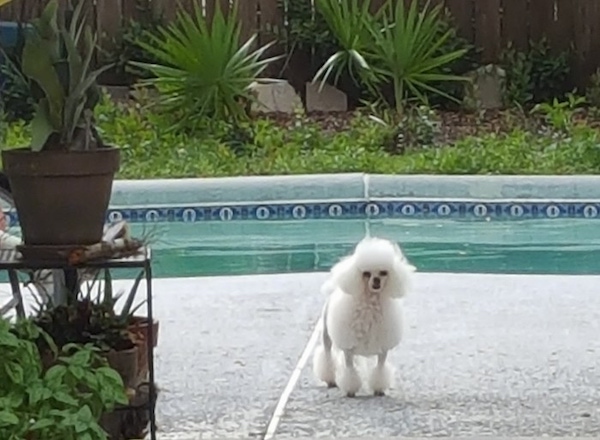 Maxidoodle the white Teacup Poodle at 7 years old, weighing 5 pounds (2.2 kg)—"Max came to me at 8 weeks from an elderly widow who cared for her breeding pairs as if they were her children. Until he was 3, he rode around the house in the pocket of my robe, and now at age 7 and 5lbs he continues to stand on my upturned left hand with his rear in the crook of my arm. I love to kayak the many springs in Florida and Max loves paddling too, riding just behind me on a pad I affix to the top of my kayak, even accompanied me on 4 day river sandbar camping paddle. Max also loves to boss around Tout d'Suite, my 20# black cat, and eat all his cat food. Max is an excellent traveler and has traveled by air/car/bus all over the US and even to Quebec City, Canada. I keep him groomed in the continental cut and he prances like a little prince, on or off the leash. He's very polite and doesn't beg or steal people's food. Max loves to engage me or Tout d'Suite in a lively game of chase. I love my buddy!" 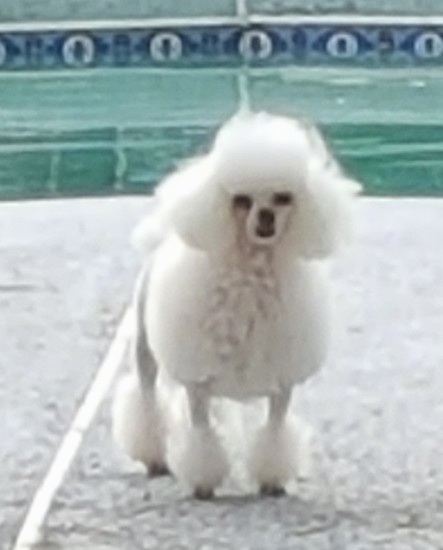 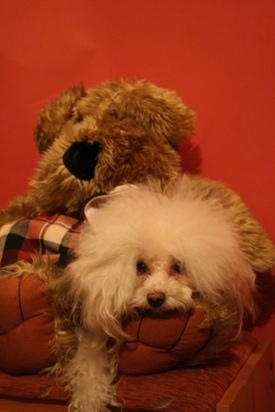 Juliet the white Teacup Poodle at 4 years old, weighing 5 1/2 pounds (2.5 kg) with her stuffed toy on her back 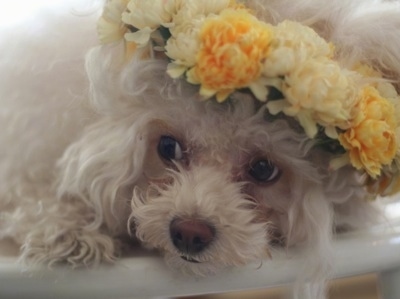 Juliet the white Teacup Poodle at 4 years old, weighing 5 1/2 pounds (2.5 kg) with a flower tiara on her head 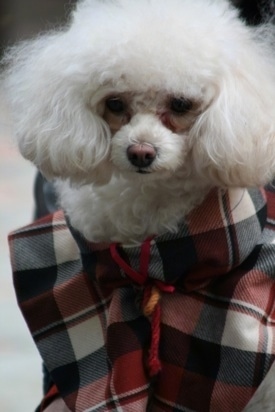 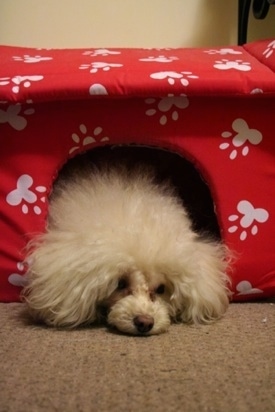 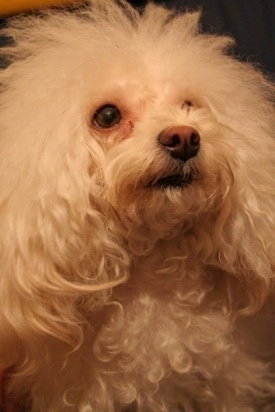 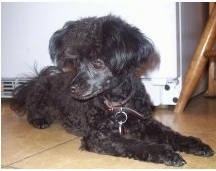 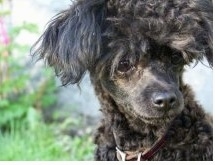 "These are photos of my Teacup Poodle, Penelope. Penny is 2 years old and weighs 5 pounds (2.3 kg). She is about 8 inches tall at her shoulder. She is a very happy little dog. Penny is a very healthy girl and enjoys her trips to the vet!! Penny is so good, she always lets me trim her hair and toenails! I think she is a very lucky little dog; she gets lots of love, but also lots of exercise and mental stimulation. Penny is healthy because she is only allowed to eat her dog food, never any people food. I think this has helped to prevent her from being a picky eater, which can be a problem in small dogs!" Photo courtesy of Lilac's Toy Poodles 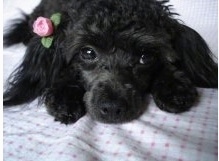