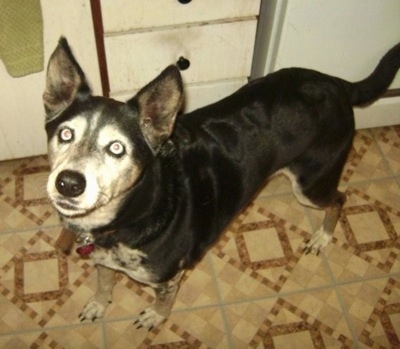 "Sheba is half Siberian Husky and half Dalmatian. Believe it or not, she's 14 and in great health; no arthritis, no joint problems, no health issues whatsoever. She had heartworms 2 years ago and took the 50/50 treatment like a champ at the age of 12, mainly because she's a mix. Everyone is so amazed when they see her run and jump across the yard. Sheba is the best dog I've had. That says a lot. If anyone were to ask me if it's a good dog to have, I'd say no, it's a great dog to have! I didn't breed her; she was given to me when she was 1 or so. The people were moving to an apartment and had no room inside for a dog. She loves people and isn't aggressive toward them."

The Dalmatian Husky is not a purebred dog. It is a cross between the Dalmatian and the Siberian Husky. The best way to determine the temperament of a mixed breed is to look up all breeds in the cross and know you can get any combination of any of the characteristics found in either breed. Not all of these designer hybrid dogs being bred are 50% purebred to 50% purebred. It is very common for breeders to breed multi-generation crosses. 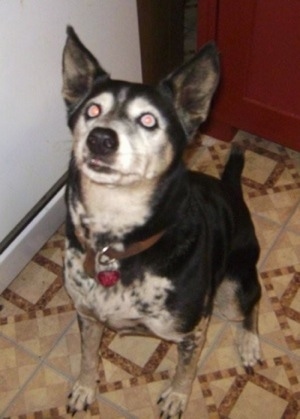 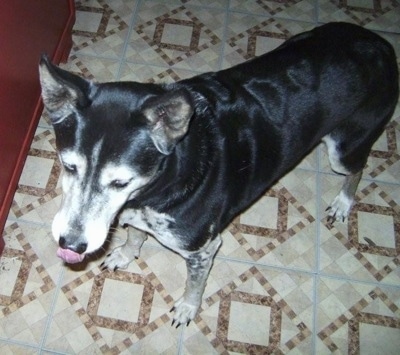 Sheba the Dalmatian Husky hybrid dog at 14 years old—"Sadly, she passed away at age 18. She had no health issues up until her passing. It was a brain tumor, which was very sudden because she had no symptoms, not even a day before her demise. I came home and saw her staring at the sky and swaying. Her eyes were moving side to side. She couldn't get up. I rushed her to our vet where they thought it was vertigo; only the next day did they find it was a tumor. I made the choice to put her down because she couldn't get up, see straight and was constantly vomiting. That's no way for a dog to live."