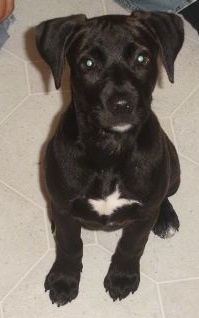 Sadie the Dingo / Labrador Retriever / American Staffordshire mix, shown here at 3 months old.—"I got my dog Sadie from a guy down the street. He had the whole litter in a kennel with the mom being pinned up next to puppy's cage. When we first got her (at 3 months) she was not housebroken, was scared of other dogs, and especially scared of humans. At once we brought her to the leash-free 'puppy park' and within weeks she loved to play with all the puppies and little toy dogs. It wasn't until a month or two later that she felt comfortable playing with the bigger dog breeds."

"Her good habits are her behavior and obedience and her ability to learn new tricks and commands. She picks them up with ease. Bad habits would have to be peeing on mats/carpet in house and tracking dirt into the house ;). She also barks at walkers passing by our house, which I find annoying. She gets plenty of exercise. She runs around the yard all day, playing fetch and using the yard as a dog track, plus, she is taken to the dog park every other day and taken for walks/runs everyday."

"I grew up with a Lab / Shepherd mix and this dog is by far a lot more obedient and just as smart. She is more socialized with other dogs than my last and therefore loves to play with other dogs, truly amazing! I also was told my entire life that Pit bulls were vicious and horrific dogs, but it wasn't until I got my mixed Lab / Pit that I realized that they are truly a product of their owners and nothing else, just like every other breed." 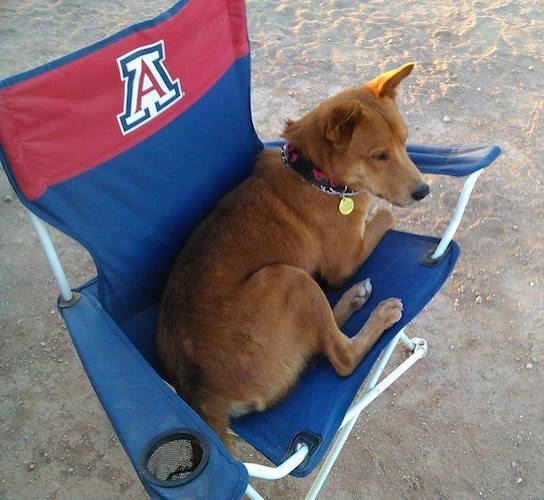 Red the Dingo mix at 2 years old—"Red lives with me in the Arizona desert. He loves to run and is a great watch dog. He is a faithful companion. He doesn't do anything he doesn't want to." 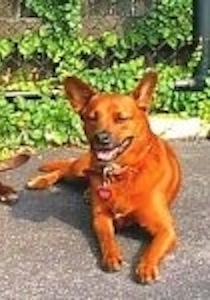