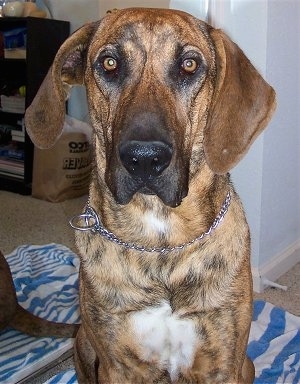 This is Duke the Plott Hound at 12 months old, weighing 75 pounds!

The Plott Hound is a medium-sized, powerful, muscular dog. The skull is moderately flat with well-fitted skin. The muzzle is moderately long with flews that make it look square. The lips and nose are black. The prominent eyes are brown or hazel with black eye rims. The hanging ears are broad-set and medium in length. The long tail is set below the topline. The strong feet have webbed toes. The coat is short, smooth, fine and glossy. While most Plott coats are single, from time to time a double coat can occur. Coat colors include any shade of brindle, solid black, brindle with black saddle, black with brindle trim, and a rare buckskin. There may be some white around the chest and feet.

This breed makes a fine companion. Loyal and intelligent, the Plott Hound is quick to learn, quick to love and good with children. Its personable nature is surely not evident on the trail. This large-game hunter and scenthound has great courage. Determined, courageous and proud, it will play chicken with a 500-pound bear or a wild, angry boar. The Plott has a curiously sharp and high-pitched voice, unlike the deep-throated howl common to other coonhounds. Socialize this breed at an early age and be sure to teach it simple obedience like walking on a leash. Plotts tend to drool and slobber. They need a firm, but calm, confident, consistent handler. Proper canine to human communication is essential.

The Plott Hound is considered the hardiest of the coonhounds. It eats large quantities of food quickly, which makes it susceptible to gastric torsion and life-threatening twisting of the stomach. Do not exercise this dog after a big meal.

The Plott Hound is not recommended for apartment life. It can live and sleep outdoors provided it has proper shelter. This breed has no road sense at all and should be kept in a safe area because it has a tendency to wander.

The Plott Hound needs a lot of physical exercise, which includes a daily, long, brisk walk or jog. While out on the walk the dog must be made to heel beside or behind the person holding the lead, as in a dog's mind the leader leads the way, and that leader needs to be the human. This well-muscled and rather lean-boned dog has the endurance and stamina to work all day and well into the night. The Plott Hound should have chances to run free, but is born a natural hunter and has a tendency to run off and hunt if not kept in a well-fenced area while exercising off the lead.

The short coat of the Plott Hound is easy to groom. Comb and brush occasionally to remove the dead hair. Check the ears often to make sure they are clean and infection free. After hunting they should be checked for torn nails, split pads on their feet, torn ears, and fleas and ticks.

The Plott Hound is the only American hound without British ancestry. In 1750 Jonathan Plott and his brother left Germany bound for America. They took with them five Hanoverian Hounds. Jonathan Plott's brother died during the trip but Jonathan settled in North Carolina. It was there that he raised a family and bred his dogs. A mix of Bloodhounds and Curs reportedly comprised the original stock. For the next 200 years the dogs were bred by generations of Plott family members and were referred to as the Plott's hounds. The dogs worked at hunting bear and raccoon in the Appalachian, Blue Ridge and Great Smoky Mountains of the eastern United States. The Plott family rarely put the dogs on the market so they remained rare outside the southern United States. The dogs were recognized for the first time in 1946 by the United Kennel Club. Plotts are hardy and have superior hunting instincts. They are very effective in the search for coyotes, wolves and wildcats. The breed was carefully developed to be stronger and more persistent. They were able to make good family companions but were seldom kept as such, as most owners acquired the dogs for the hunt. In 2006 the breed was officially recognized by the AKC as the "Plott" and is now shown as a show dog, but there are many who still hunt and breed them as hunting dogs. 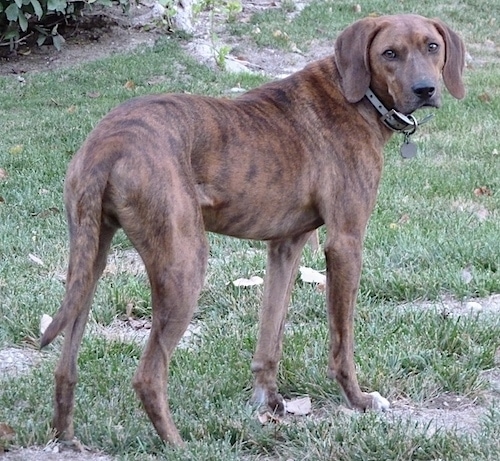 SnoopDogg the Plott Hound at about 7 years old—"Snoop and I were meant to be together. I had just lost a Rhodesian Ridgeback and was dogless. I have always been a hound person. Snoop was standing in the middle of a two lane highway in the middle of nowhere in NM. He had no collar and was standing over the dead body of a different type of dog. Because it was obvious that he was feral, I don't know if the dead dog was his running buddy or lunch. The other dog had been hit by a car. There were car parts all over the road and cars and trucks were whizzing by without even slowing down. I had to try and catch him. Took some time because he was scared to death but I finally got my hands on him. He was covered with buckshot and was skin and bones. I thought he was a grayhound because his tail was tucked so tightly underneath his belly that his shape looked like a grayhound. His head, though was all coonhound. I managed to get him into the back seat of my truck and took him home. He had never been in a vehicle before and was shaking and having a panic attack. Then it was obvious that he had never been in a house before either. I started housebreaking immediately. He made one mistake and never made another one. " 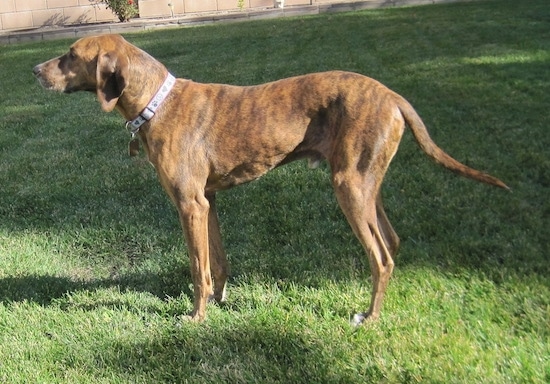 SnoopDogg the Plott Hound at about 7 years old—"The following day, I took him to the vet. The vet said he was a Plott Hound and thought he was about 4 or 5 months old. He was scared to death! The vet said he was heartworm negative and I should socialize him and feed him to put weight on. When he was back to a normal weight, the vet scheduled his series of shots and neutered him. I took him everywhere. He was joined at my hip. After a while, I didn't even need a leash except when we were in town. Otherwise, I think he was so scared to lose me that I couldn't have shaken him if I had wanted to. Socialization took a while and is on going even though it has been six years. He still is not comfortable with men, although he will warm up eventually. It definitely is a body type of a man that he is most afraid of, so I assume that had to do with the buckshot he was covered with. He gets along with cats and other dogs and loves kids. He is better about resource guarding (food) and still will not play with a toy. I believe he was removed from his siblings and his mother very early and never got the training that is so important that puppies all learn from their litter mates." 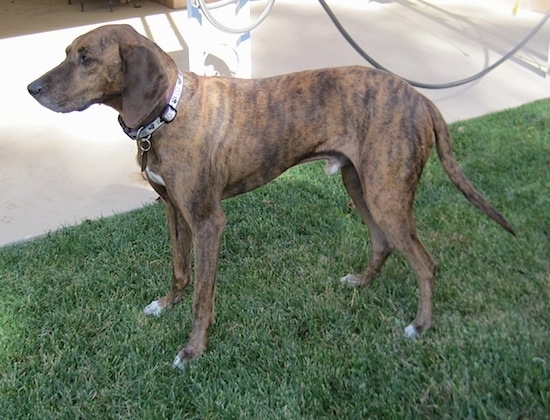 SnoopDogg the Plott Hound at about 7 years old—"His biggest issue is still the sound of gunshots or vehicles back firing. He still has panic attacks where he has to go find a dark quiet space where he can hide until he can relax. He used to get under my bed and pant, shake and drool. I tried to get under the bed with him and tell him it was ok...ooops! I have been watching Cesar Milan forever and happened to catch an episode that he dealt with a frightened and panicked dog. By going under the bed with Snoop to try and calm him down, I was feeding the behavior... he was getting attention for acting that way... so I stopped all attention at that time and just let him deal with it. When he felt comfortable to come out of his hiding spot, then I gave him lots of attention... It does still happen, but he doesn't have the need to get under my bed anymore. Now he can be ok laying on his bed and then checks in with me when he's over the episode. I wish I could help him get over this fear, but it's been so long at this point that I doubt if it will ever be gone totally. He enjoys going to the dog park. He meets and greets everybody and avoids unstable dogs - all by himself. He is a comedian and he makes everybody at the park laugh. Everybody knows his name. He is very protective of me, still loves to play like a puppy and I thank God every day that I happened to be on the highway in NM that day." 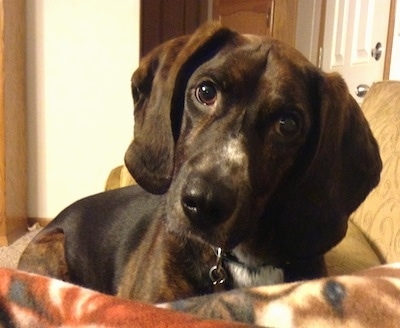 Augie the Plott Hound at 3 1/2 years old—"Augie was newly brought into my life. He is sweet, smart and loves to cuddle on the couch! He loves running in the snow and taking rides in the car." 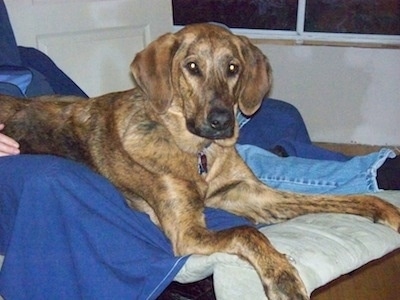 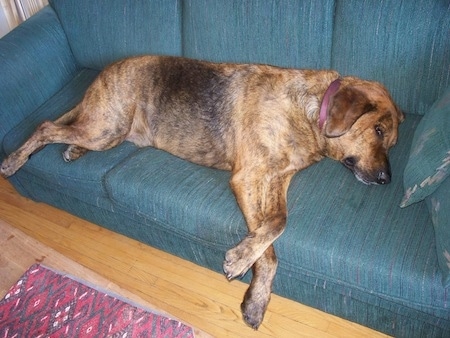 Guszilla the Plott Hound at 3 years old, weighing a massive 137 pounds! "He is a gentle giant, so friendly and such a cuddlebug." 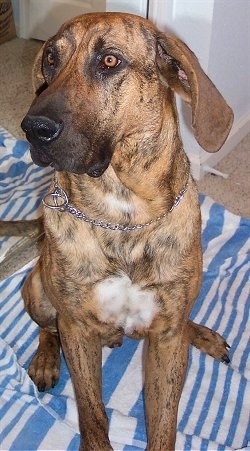 This is Duke the Plott Hound at 12 months old, weighing 75 pounds! 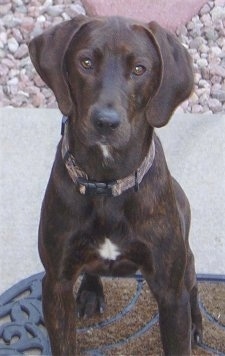 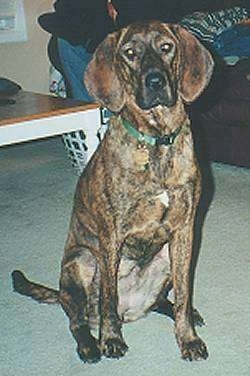 This is Loki, a 14-month-old Plott Hound rescued from the SPCA. 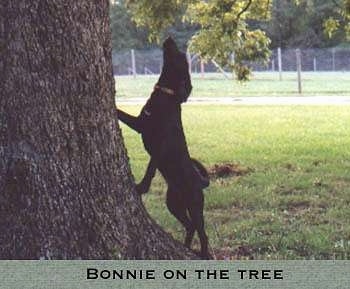