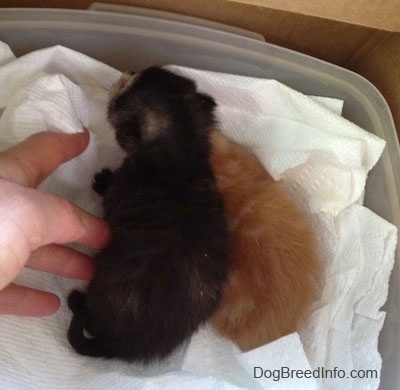 Cleo (black calico) and Kenny (orange tiger) were rescued from an old barn that was scheduled for demolition. Their mother was an injured feral cat. The barn was due to come down and the litter had to be moved outside. A failed attempt was made by some other people to reunite the feral mother with the kittens. After losing one of the three from the litter, the decision was made to take the remaining two home and hand raise them. Kenny the orange tiger still had a dried umbilical cord attached and only had one of his eyes open. Cleo the black calico had both eyes open and her umbilical cord had already fallen off. Yet the kittens could climb out of the container they were first placed in. Based on those factors their estimated age was about 1 week old. It took time and patience to teach them how to drink from a bottle. The bottle nipples did not come with holes; you have to cut your own opening. One of the trickiest parts was getting the holes in the nipple just right. We went through a few nipples before getting the holes to release the milk at a speed that seemed right for them. The method that finally worked well was holding a lighter to the end of a safety pin until the tip of the pin was red hot and pushing the pin into the nipple so it burned a hole into the rubber. It took about four holes in the top of the nipple before the liquid would squeeze out at a nice rate, yet barely drip out when held upside down. This meant the kittens would have to suck to get the milk, lessening the chances of getting it down into their lungs, yet it would still come out fast enough that they were satisfied.

Taking care of orphaned kittens this young without their mother is not an easy task for a human. The kittens have to be fed every 2 to 3 hours and they have to be pottied after eating. One of the very important jobs a mother cat will do for her kittens is to stimulate their bowels and genitals until they urinate and defecate. The mother cat will eat the waste in order to keep their living quarters clean. Keeping these kittens alive and healthy was going to be a lot of work, unless I could find another cat with motherly instincts so strong that she would take on someone else's kittens. It was a long shot, but since we had a farm with other barn cats of our own, it was worth a try. 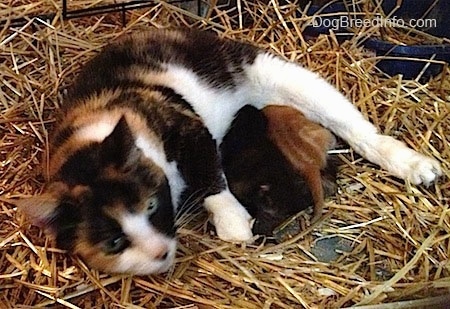 After getting a hiss from a few other female cats, one female reacted a lot differently to the kittens. I had showed her Cleo first. I held the kitten close to her and when she did not react negatively I placed the kitten down next to her. Pretty-Girl Winny licked the kitten’s head and lay down, rolling over in an attempt to feed it. I then handed her Kenny and she had the same reaction. She started to purr. I had found them an adopted mom to help care for them! While Winny does not have any milk for them, she is happy to do everything else. She keeps them clean, potties them after we feed them and keeps them out of trouble. For example, I had been feeding Kenny and Cleo wanted to eat, too. She was trying her darnedest to get to me. She started squeezing through the slits in the crate. Oh boy, time to poster-board up the edges of the crate so they cannot slip out like that. Before I could reach down and get the escaping kitten, Winny came to the rescue, picking up her newly adopted baby by the neck and bringing her back to safety. Another example was when Cleo had started crawling up the side of the water bowl. Winny had acted fast and darted over to stop her kitten from getting into the water. She picked her up and moved her to a safer spot. The water bowl was placed on a higher platform to keep it from happening again. 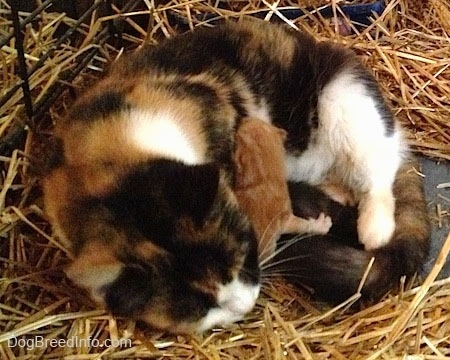 We quickly realized that we could not feed both kittens at the same time, as Winny was fine with one kitten being removed for a feeding, but if both were taken out at the same time she became very upset. She would bat her paws at us and try and take her babies back. She even hissed and growled a few times and you could see the protective momma cat look in her eyes. Taking both babies at the same time was not something she was willing to accept. The least we could do for all of her dedicated hard mothering of someone else's kittens was respect her wishes and only feed one kitten at a time. Winny is not a cat we raised. She came from the same neighboring farm as the cat Bob who had just showed up at our farm one day and stayed until the day she passed away of old age. Bob was a female cat who was named for her lack of a tail. She had strong motherly instincts and was always seeking out younger kittens to mother. Pretty-Girl Winny was one of the cats from the old barn that was being torn down. Right before the barn demo had started she had moved to our farm. We later found out that Pretty-Girl Winny was Bob's second cousin. I can see a lot of the same personality in her. Not even Pumpkin, the king of all cats here at the farm, attempted to mess with Winny. There had been no fight between them, but I was there the day the two cats first saw one another and it was the look on Winny's face, that scary stare-down along with a growl that made Pumpkin decide that Winnny was not a cat worth messing with. Winny had kittens and she didn't want any other cat near them. 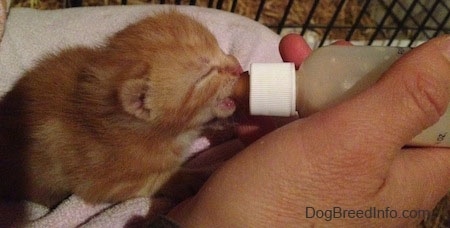 Kenny the rescued orphan kitten at about 1 week old 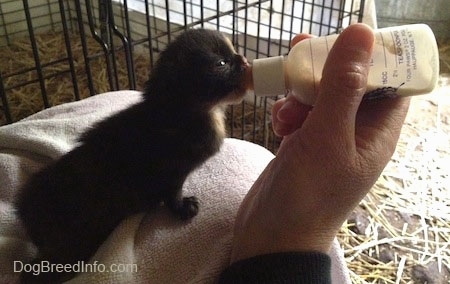 Cleo the rescued orphan kitten at about 1 week old Kenny the rescued orphan kitten at about 2 weeks old 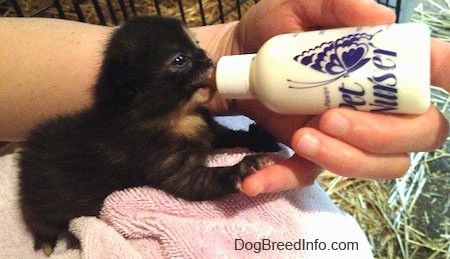 Cleo the rescued orphan kitten at about 2 weeks old Kenny the rescued orphan kitten at about 3 weeks old Cleo the rescued orphan kitten at about 3 weeks old 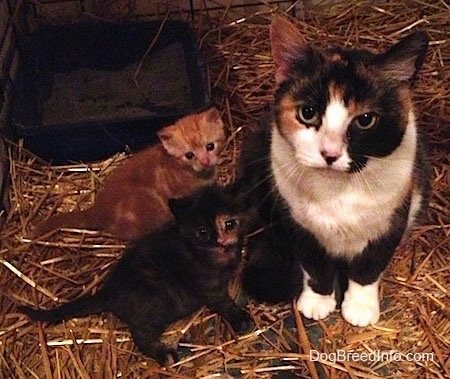 At 3 1/2 weeks old Kenny the orange tiger kitten and Winny the acting mommy cat were both sneezing and coughing a little. The vet came out and gave them a checkup. They were put on liquid Clavamox, which is an antibiotic safe for growing babies. Cats are independent, feisty creatures and while a cat will let you do something unpleasant for a while, if you do not associate something positive with it the cat will catch on and do everything in its power to stop you. Therefore right before Winny gets her medicine I let her smell some can cat food. As soon as she drinks the dropper full of medicine I immediately hand her the food. This has prevented her from getting defensive when she sees me walk up with the medicine bottle. Instead of thinking about the medicine she is thinking about the food. Little Kenny takes her medicine and gets her bottle right after. All three cats were also wormed with a kitten safe dewormer. At about 4 weeks old the kittens have started playing with one another and using the litter box. When we show up with the bottle the kittens come running over. They are very good eaters. Kenny (orange kitten) was spotted walking up to his mother and playfully batting her in the face three times in a row. Bam! Bam! Bam! Winny (mommy) started to purr and licked her head. 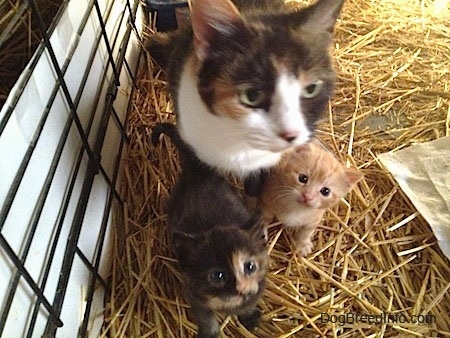 I do not know what we would do without Winny the acting mommy's help. The kittens are clean, kept warm at night and are even disciplined. I was sitting down feeding Kenny a bottle when I saw Winny move towards Cleo in a way that at first I thought "Oh no, is she going to hurt the kitten?!" The thought only lasted a second as Winny's mouth reached the kitten and she gave it a very light-nudge bite. Turns out Winny was trying to clean Cleo and Cleo was not standing still. As soon as Winny disciplined her kitten Cleo rolled over to let herself be cleaned. Once in a while Winny will paw at us (claws in) as we put the kittens back after eating. She too wants some milk. We squirt some into her mouth and she licks it up. Oh boy, I think Winny is disciplining the humans too!

A friend stopped by to visit the kittens and for the first time since they were a week old I tried taking them both out of the crate at the same time. Winny was relaxed and fine with it. She has learned we mean the kittens no harm. 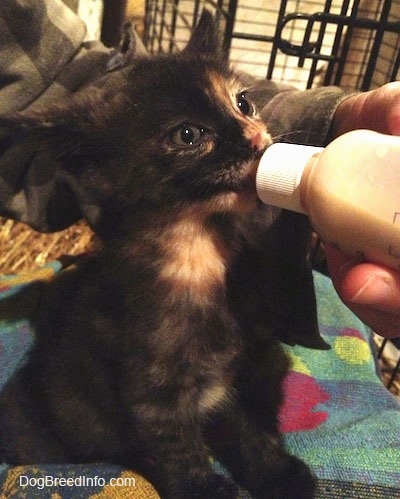 Cleo drinking her bottle at about 5 1/2 weeks old Kenny drinking her bottle at about 5 1/2 weeks old

At about 5 weeks old the kittens started weaning themselves off of the bottle. There was a bowl of water and dry food in their area at all times and while I had not seen them eat or drink, I had suspected they were since they started randomly refusing the bottle. It started off slowly. They started chewing on the nipple instead of sucking. The next feeding the kitten that had refused would drink extra as if it was really hungry. It was hit or miss if they would drink their bottle. As the days passed they started refusing more often and at one point Kenny had chewed the top of the nipple off the bottle! She wanted to chew, not suck. One day when the kittens were about 6 weeks old I decided to put a handful of a different type of cat food in their bowl. Something new for them to smell. Both kittens ran over and started eating. It was confirmed that both kittens were indeed eating solid food. This picture is them eating can cat food with their adopted mom. At 6 weeks the kittens were fully weaned from the bottle.

Without receiving their mothers antibodies through natural cat milk the kittens are more prone to getting colds and both kittens had started sneezing and I could hear some congestion. They both had to be put on Clavamox (antibiotic). They had also started getting an eye infection, which was treated with an oral eye antibiotic gel.