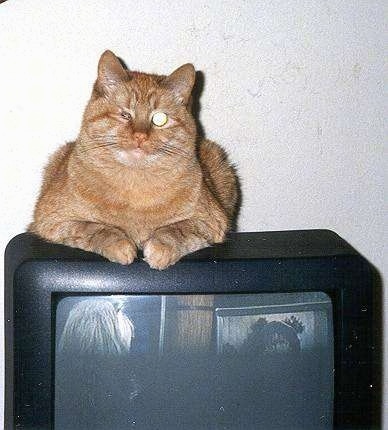 Caraticus came to us as a very beat-up little kitten in the summer of 1989; a one-eyed, malnourished, flea-ear-mite-worm infested kitten that I could hold in the palm of one hand. We thought sure he was a hopeless case, but he just wouldn't quit purring at us! He purred so loudly that you could hear him clear on the other side of the room...and he insisted on licking any body part that came near him. So, we decided to "wait and see" until the next morning. The next morning his enthusiasm for life hadn't diminished one bit, so he went to the vet for his first exam and a bunch of medicine. (Since all this happened a couple of weeks after my high school graduation, it was decided that he was my graduation present...especially since he quickly decided that I was his "Mama".)

Below are some pictures that give a good idea of his personality. He still purrs up a storm, and loves to give endless "kitty kisses" to any exposed piece of skin he encounters. 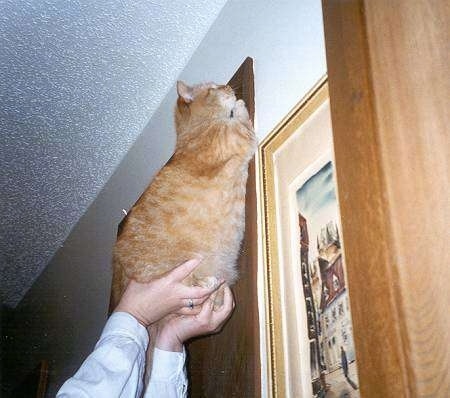 Caraticus loves to eat cobwebs, and he hasn't quite ever figured out that he can't stand on the tops of doorframes. So I help him up for a little snack/housecleaning. (Unfortunately the cobwebs don't show up in the photo.) 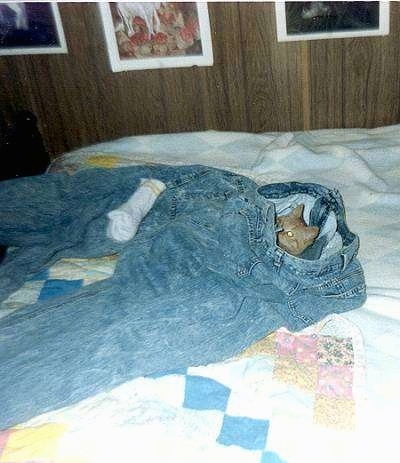 Caraticus is a year or two old in this picture.... I was getting ready for work and had just taken my jeans out of the dryer. I turned around to put them on, and he had crawled up the pant leg and was settling down for a nice nap in the warm fabric. 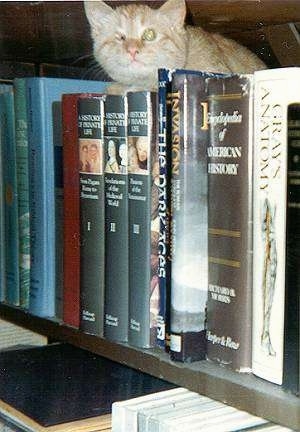 My parents had a large bookcase dividing up part of the living room and Caraticus loved to play inside it, between the rows of books. Unsuspecting passers-by were often surprised by an orange paw reaching out and snagging their sleeve.

Caraticus is still going strong, though a little grayer now around the muzzle, and will have his 12th "birthday" on June 21, 2001. He has been entrusted to the care of my parents since 1995 when I had to leave him behind when I moved from Washington to Colorado to go to college (I cried for days!). 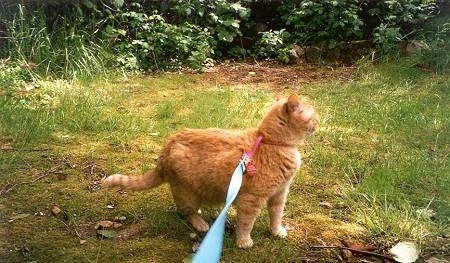 Some cats can sense people reaching for can openers; Caraticus can sense someone picking up his leash and harness...and he will make a beeline for you when you have them! He loves to go outside on his leash, and this photo is of him surveying his backyard domain.