Raising a Puppy: The 15th Week in his New Home—Spencer the Blue-Nose Brindle Pit Bull

A day in the life with Spencer the American Pit Bull Terrier puppy. Spencer's 15th week—24 weeks old, 57 pounds, 20 1/8 inches from the ground to the highest point of the shoulders (the withers). 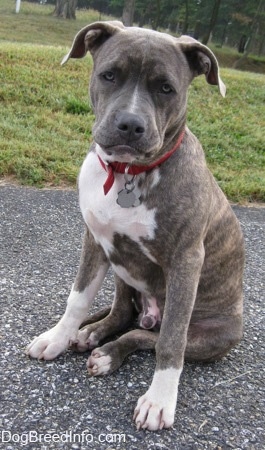 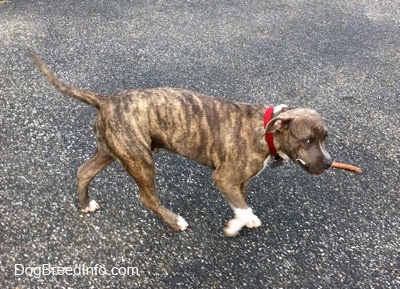 What a silly puppy, I was getting ready for our morning hike in the woods. Once again, as soon as it was time to leave Spence as usual ran for a bone, picked it up and off we went. 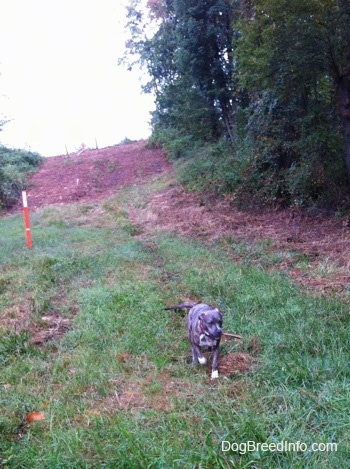 The pup happily carries random things. Various bones, toys, wood sticks and once tried to carry a clump of horse poop with him, but I made him drop that as soon as I noticed. 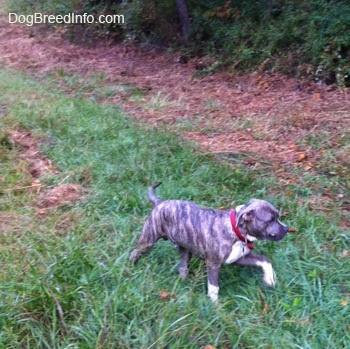 When I see him start to hunt around with Bruno, an activity the dogs really enjoy, if it's something I don't want to lose I try and remember to take it from him because he usually ends up dropping it as his interests peaks in something else. When we got back from the hike I handed it back to him and he carried it for a tiny bit and then dropped it in the driveway.

Later the same day the UPS driver pulled up to deliver a package. Spencer walked over to get his back rubbed and while he was being petted he picked up the bully stick that he had dropped in the driveway and submissively turned in a few circles as the driver grabbed the other end of his stick and played with him. If anyone tries to take it from his mouth he gives it to them with ease. When the driver left he dropped the stick back in the driveway. Its seeming like he goes for the bones when something fun is about to happen. Can't leave those bones out, ya know. 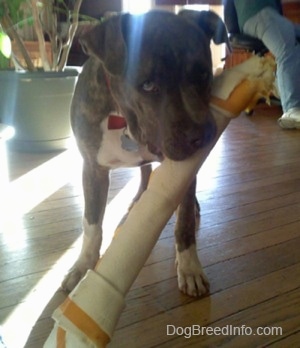 This bone was a little too big for him to carry along on our hikes.

The Chickens and Peahen

We are making great progress with Spencer and the birds. Granted, once in a while the pup will run after a bird, but for the most part he does not try. Here is a clip of Amie walking both Bruno and Spencer down to the chicken coop. They pass all of the chickens with no problems. The peahen that was lying on an egg is not too happy to see the dogs and puffs out in defense of her egg. This piques Spencer's interest, but he listens when Amie tells him to leave it. 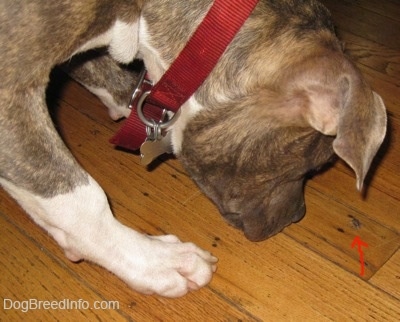 Spencer spies a stink bug on the floor. Don't you go eating that, now. It'll make the house and you all stinky and it can't be good for you! "Leave it."

Spencer is getting much, much better at passing barking dogs on walks. Now we are working on ignoring squirrels and rabbits.

Spencer and the Horses

Spencer has learned to respect horses. You don't chase them and you keep your distance. This is partly due to an ornery, little stud pony named Budweiser who likes to harass dogs.

Walking through one of the horse fields we come across the herd of ponies. Bud decides to push Spence around; the pony is pushy like that. The pony grew up with Bruno and the two of them used to play when Bruno was bigger than the pony was, so Bruno knows all of the pony’s games and still plays with him. Spencer, on the other hand, does not try and play with him since the pony is just too big and pushy now that he is older. I have to put the pony in his place and tell him to leave my dog alone. No need for Spencer to put the pony in his place; he sees his pack leader (me) taking care of things.

A couple of days later we run into a different herd of horses. When I realize the pup stopped following me I stop and look back. Spence was standing there. There is no way he wants to walk through the middle of those large creatures. I walk back to the pup to show him to just walk around. He follows me and then Bruno shows up and takes over in guiding the pup. He shows Spencer the best way to walk around the horses. Dealing with horses is something Spencer needs to learn since he lives on a farm. He needs to learn to respect them and not challenge them, which he seems to be doing already. He also needs to learn how to walk around them without getting under foot. 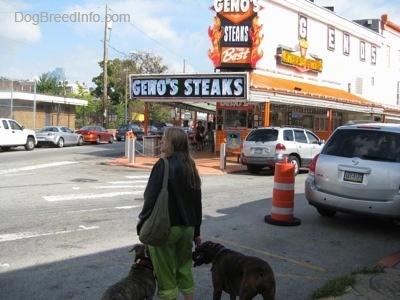 We take a trip to Geno's Steaks in South Philadelphia, PA. Spencer does very well with all of the sights and sounds around him. Seems much more relaxed than his first trip to the city. 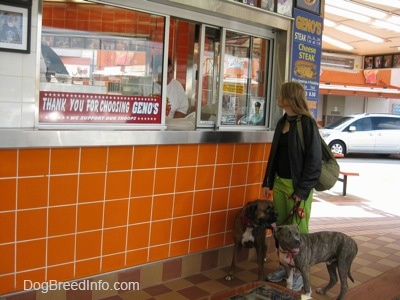 The dogs stand quietly as I order the steaks. 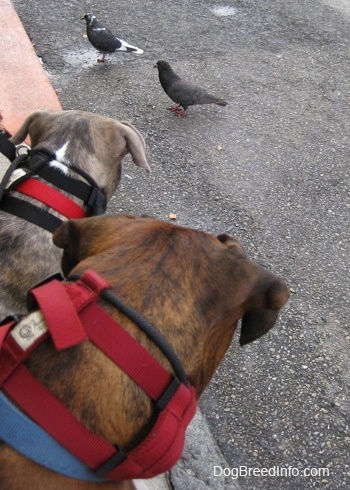 What a perfect opportunity to work on not reacting to small animals while on a leash. Pigeons! And oh boy did he want to chase them the first time he saw them. A pigeon had walked behind where we were sitting and his curiosity had peaked. A tug on the leash made him sit and I sternly told him to "Leave it!" in my mamma bear voice and the pup sat down and just watched. 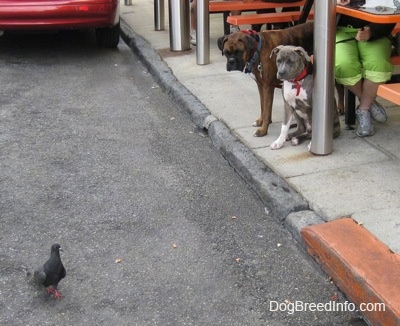 …and watched. Bruno watched too, but never did he decide to go for it, unlike Spencer the very first time he saw the birds. 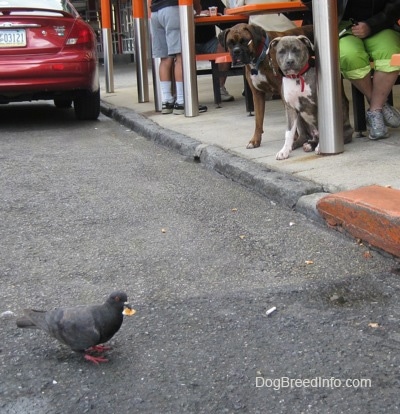 The leash was loose so I decided there was no harm in the pup watching. As Spencer relaxed I noticed the birds moved closer, but they were not about to get too close. 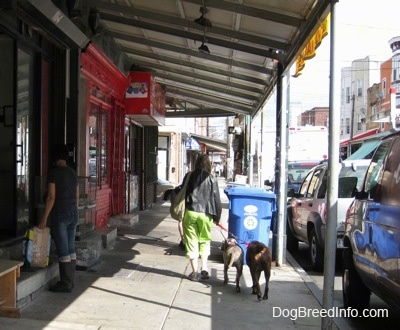 We walk around the Italian Market. Notice the cages to the left; they are full of pigeon-type birds. We walked past them a few times until the pup was able to do it without reacting. 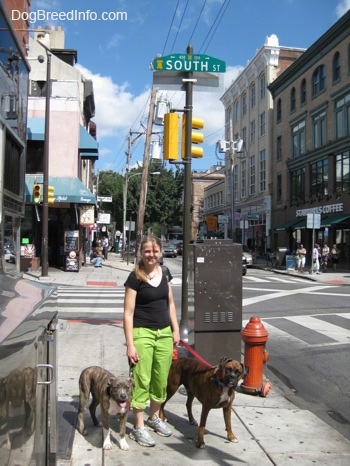 Before we left we took a walk down South Street. 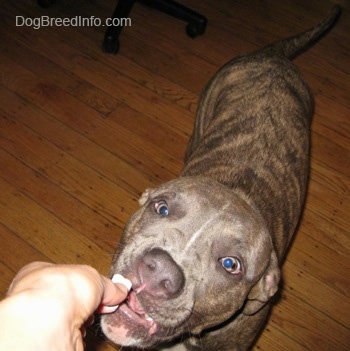 Exactly three weeks had passed since Spencer's first dose of worm meds. It was a chewable and at first he seemed very eager to eat it. It must have smelled good. However, after taking a small bite of it he spit it out. I know from the past that if I had put it in cheese or some type of treat he would have just eaten around it. The meds would slowly be lost as they got wet and smeared all around the floor or dog bed, so I broke it in half and pushed it down his throat. Sorry pup, but you had to eat it. I only had one dose and no extras to experiment with. 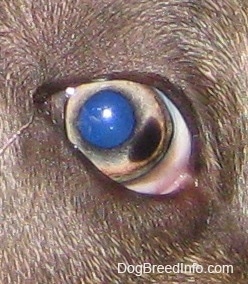 I noticed this past week a black spot developing in Spencer's left eye. Medically it is nothing to worry about, just his eye color changing. When Spencer was a small pup his eyes were very blue. Slowly they have been changing over to a hazel/blue color. Sometimes his eyes still look blue, and sometimes they look more hazel, like in this picture. That dark spot seems to be getting larger. Makes me wonder if he will eventually have one hazel eye and one black/brown eye. It would match his blue brindle coat color and the spots on his underbelly.