A day in the life with Spencer the American Pit Bull Terrier. 1 year 5 months, 79 pounds, 22 1/2 inches from the ground to the highest point of the shoulders (the withers). 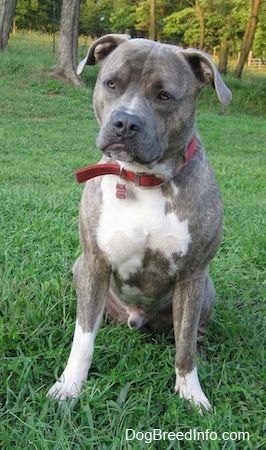 Spencer and the New Chicken

Talk about a mental challenge! Someone had just given us an adolescent chicken named Ducky. The chicken appeared to be hand-raised as it was not afraid of anything and was very friendly. Spencer's instincts wanted to chase the bird, but his pack leaders said "No, leave it!" This was not an easy task for him. Spencer was very unsure and this was apparent by his tongue flicking, the way he yawned and his fast panting. It was a hot day and most of the panting was because it was hot but a few times Spencer panted just a little faster as he resisted chasing the bird. The fearless bird invaded Spencer's space by walking so close. Bruno, on the other hand, was more relaxed, although he did a few tongue flicks of his own. Spencer has learned to ignore the other birds on the farm. He no longer chases the guinea fowl, peafowl and older chickens, but this bird was new. Sorry Spencer-puppy you cannot chase or go after the chicken. Even the cats are told to leave the bird alone. Willpower dear pup, willpower. What a rough life you have on the farm. And uh, Ducky...I think you might be a little too brave for your own good. 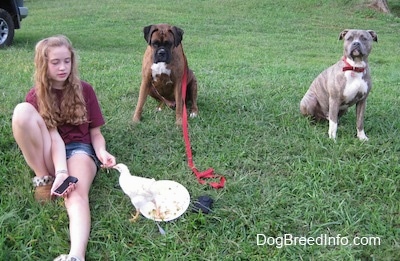 Later the same day, Spencer was not as interested in Ducky the chicken. Bruno, on the other hand, just kept watching although he never got up from sitting down. He just watched. His leash was on because he is still not allowed to run after his ACL surgery. The leash helps us keep him from suddenly running off. 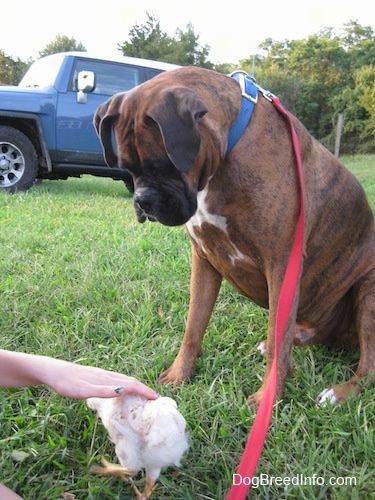 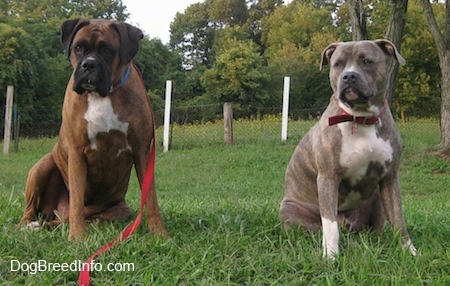 I often call Bruno my Monkey-Dog. This picture shows the face that gives him that name. What a handsome shot of the two of them. 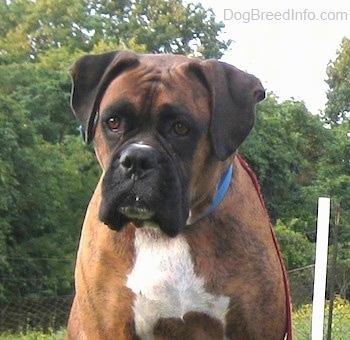 Spencer and the New Chicken - Day 2

Just the day before, Spencer the Pitbull met Ducky the adolescent chicken. Spencer had shown signs of wanting to chase the chicken. His pack leaders told him "NO" and while he was listening it was a big mental challenge for him as his instinct to chase it was strong. The next day when the chicken was brought out however, Spencer seemed to have given up on the idea. Bruno was on a leash since he was still recovering from his ACL surgery and is not allowed to run. Had Bruno been off leash I think he would have walked off just like Spencer. 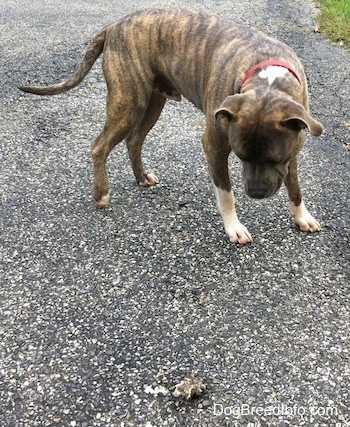 Spencer, what are you looking at? Oh no, no, no, no, don't even think about it. That's a pile of peafowl poop! 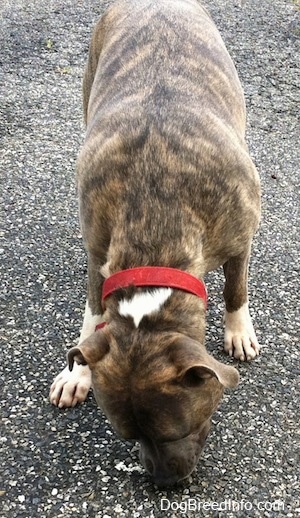 Oh gross! "Hey! Leave it!" Stop eating that! It can't be good for you and you can't tell me it tastes good and don't lick me! Go get a drink and wash your mouth out. Ewwww!!!!