Raising a Puppy: The 21st Week in his New Home—Spencer the Blue-Nose Brindle Pit Bull

A day in the life with Spencer the American Pit Bull Terrier puppy. Spencer's 21st week—30 weeks old, 69 pounds, 21 9/16 inches from the ground to the highest point of the shoulders (the withers). 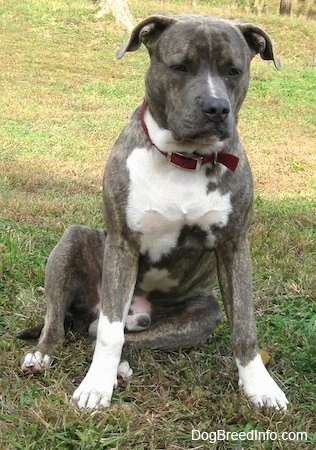 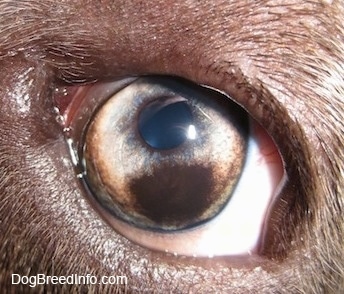 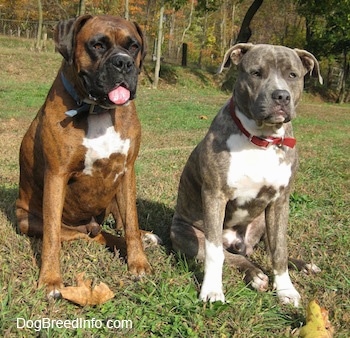 While not as big as Bruno yet, the pup is sure catching up in size. It still seems however that he will be a bit shorter in height. 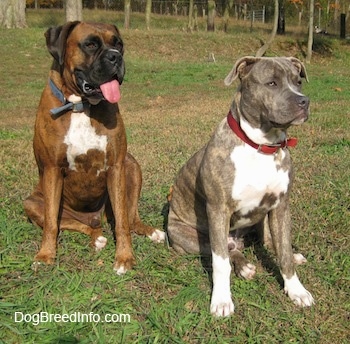 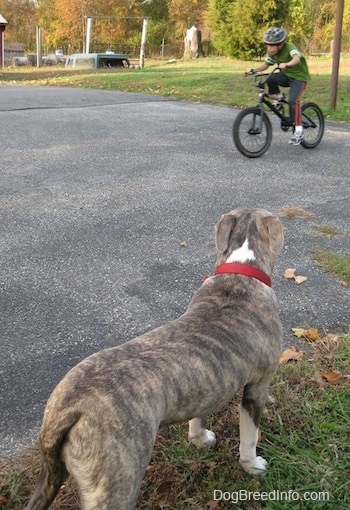 The neighbor came over to help Spence practice not chasing after bikes. The pup has gotten so much better that a leash was not needed to make him stay. This time he was not protesting; no whining or barking and it was not necessary to make him lie down on his side. Even so, asking him not to chase was a huge mental challenge. 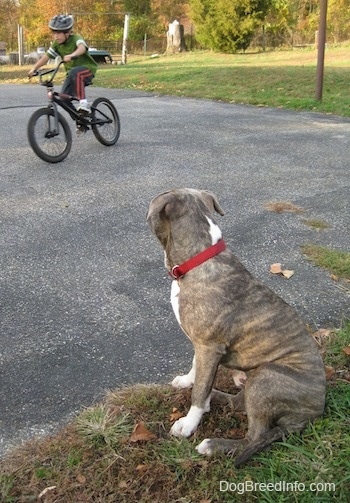 Spencer sat down on his own and watched the boy ride by.

He wanted to run, but I kept telling him to stay. When he would look like he was going to run anyway I would step in front of him to reinforce that I meant it. He was not allowed to take off running after the bike. 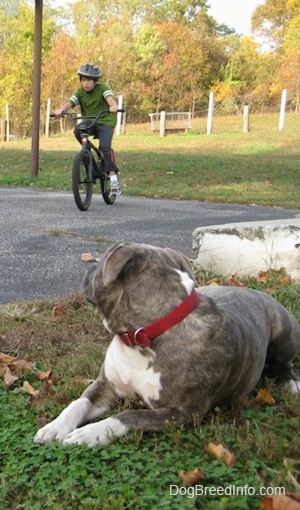 Spencer lay down on his own; a good sign. 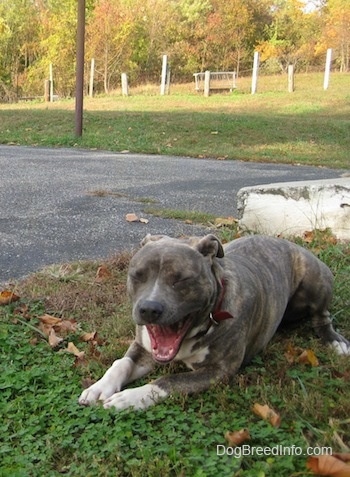 He kept yawning, which is a sign that he was either frustrated or trying to work something out in his mind. In this case I believe it was a little of both. He was frustrated that he was not allowed to chase the bike. His mamma bear pack leader was standing there and she meant business. But this hunk of metal and this kid kept gliding by on these spinning wheels. He wanted to run after it, but knew he was not allowed. 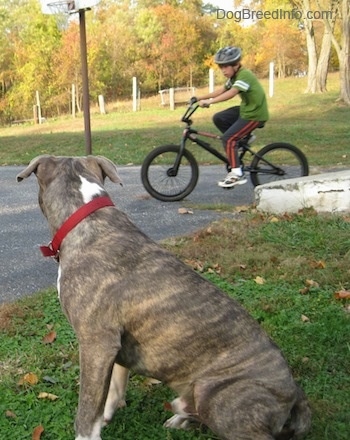 Spence sat back up and watched. I kept telling him to stay. 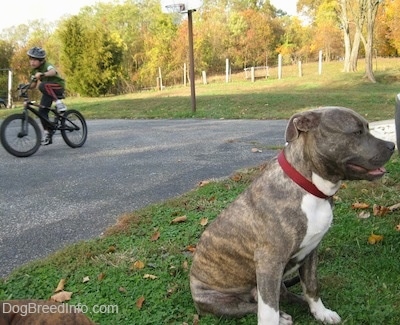 On his own he turned his back to the bike. That was him telling me that he gave up, he was not going to chase the bike. 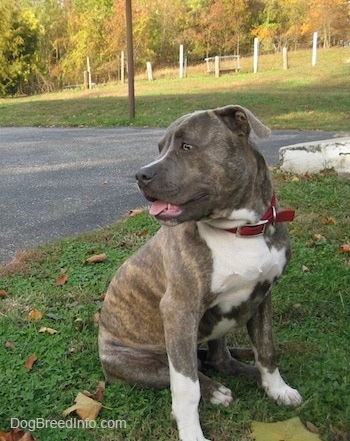 After the bike passed he turned around and looked at it. I had Spence walk around with me off leash while the bike rode by. The little boy stopped riding and said hello to him. That was enough practice for the day. He is getting so much better. Having an obsession with chasing a moving bike could have gotten him in big trouble one day, even killed. It was not something to let slide by. I believe that with practice one day he will ignore bikes just like his big brother Bruno.

Spencer walked over to the front door, sat down and whined. He was asking to go outside. He usually just stands at the door waiting for someone to let him out. This time I had been upstairs and no one was there to see him. What a good pup for not peeing on the rug in front of the door!

The Pup vs. Bruno

The pup can now run faster than his big brother Bruno!

Contrary to what this may look like, this pile of fresh puke is not dog food. It smelled like horse poop and something else. Very foul. And to think that I was going to post that the pup seems to be less interested in eating poop these days. Apparently not! 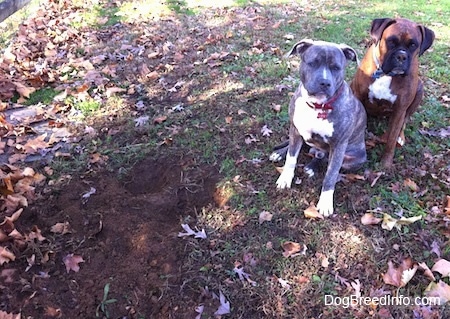 You two clowns are so busted! Daddy is not going to be happy with either of you. You just dug a hole in the yard right where people have to walk. 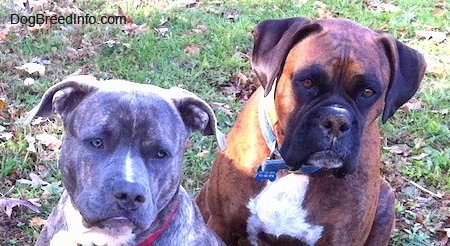 Bruno, my first instinct was to blame it all on your kid brother there, but look at your nose! It's all brown. That's evidence, my dear boy! Spence, you are not off the hook. It is hard to see in this picture but there is dirt up in your nose. 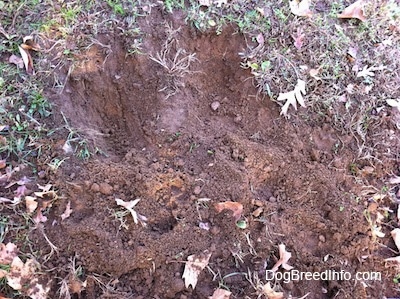 There are two sides to this hole. Each dog was digging side by side. Double trouble! 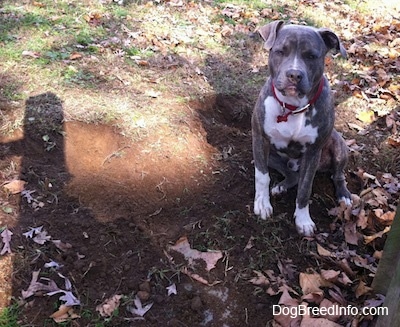 The next day I caught the pup making the hole even bigger! Spence discovered the thrill of digging a hole at the yard’s expense! Spencer and Bruno in their rider Halloween costumes. Spencer has a western cowboy and Bruno has a headless pumpkin rider.

At a Horse Show

We take Spencer to a horse show for some more good old socialization and to practice good manners. Spencer is making very good progress. He does great with people who are ignoring him, with horses and with other dogs while we are on the move walking. Even if the other dog is acting up as we pass, as long as we are walking he does pretty well at ignoring them. Now we need to work on other dogs passing him while Spencer sits still and watches. That seems difficult for him to have to stand still while another dog that does not have the best manners is passing him. If we are walking it's much easier for him to ignore. 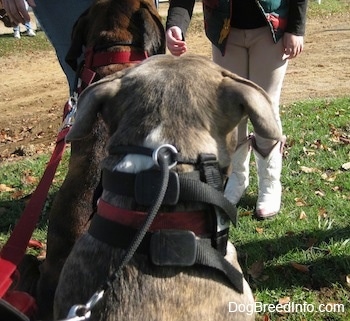 When little kids come up to him very excited Spence needs work on staying calm as he is being petted. It is a big challenge for him. Big brother Bruno manages to stay calm but Spence still wants to wiggle his big body all over, pulling toward the person. Making Spencer sit down helps a lot in keeping him calm. On the other hand, if a child comes up to him calmly he is usually able to stay calm. In either case, calm or excited child, Spencer does not jump on the person. Bruno and Spencer watching all of the activity around them. Neither dog has any reaction to horses passing. Spencer and Bruno watch a couple of Great Danes in the distance. As one of the Danes pulled toward Spencer, Spence started to shake. He was not allowed to pull back and this was a huge challenge for him. He would have loved to pull over to the Dane and start a play session, but that would have been very bad doggie manners.

As the Danes walked their owner down the dirt path Spencer wanted to pull toward the Danes so badly he was shaking. I made him sit down.

At one point he darted and I body blocked him and sent him back. Bruno, of course, stood there like a good boy.