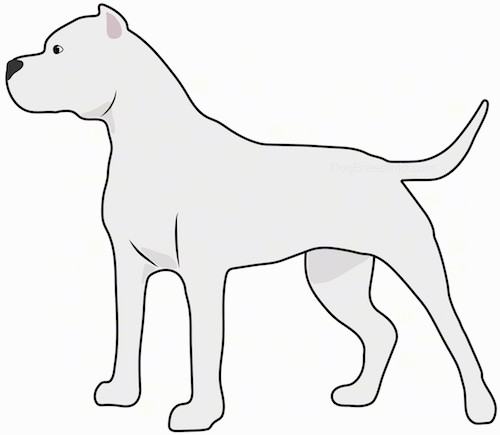 The Cordoba Fighting Dog was lean and muscled with a short coat that was known to be white with the occasional small brown markings. This breed also came in fawn, brindle, and other various colors although the white fighting dogs were the most popular among the sport scene. They were known to look like a cross between a Boxer and a Mastiff. They had a broad strong chest, muscled jaws, and thick skin. Their ears were usually cropped to ensure that they wouldn’t be ripped in a fight and they had a medium sized snout, not too long but not squished either. All of these qualities together made the perfect dog to train for fighting other dogs or hunting wild animals.

These dogs were bred and trained to fight to the death. They were known to be extremely aggressive in any situation, even against their owner and pack. The Cordoba Fighting Dog was known to fight rather than mate and was known to resort back to its aggressive behavior at any moment.

The Cordoba Fighting Dog was inbred too many times, resulting in many health issues. They were especially known to have skin diseases, rashes, and deafness.

Since these dogs were bred for fighting and hunting alone, they were mostly kept in a kennel due to safety reasons. They were not trusted to roam free due to their taught aggressive behavior.

Like any other Molosser breed, the Cordoba Fighting Dog would have needed to go on regular walks and would have needed an outdoor space to run and explore. Unfortunately, this specific breed was mostly kept in kennels due to their fighting behavior that they were all taught.

With short coats, there was only need to groom this dog occasionally and bathe when needed.

The Cordoba Fighting Dog originated in Argentina during their colonial period when they used and bred many fighting dogs for war. The Spanish most commonly used the Alano dogs as war dogs which were not known as a specific breed at the time but instead as a type of dog. The Alano’s were also related to the Alaunt breed, the Molossus dog of Rome, and the British Mastiff. These dogs were known to be fierce and muscular, perfect for the war, hunting, and use as cattle dogs.

Before the use of the Cordoba Fighting Dog, mixes between Bulldogs and Terriers were the most used including dogs such as the Bull Terrier and the Staffordshire Bull Terrier being the most popular. These dogs were brought on ships and used as entertainment while traveling to other countries. This made the new dog fighting sport grow throughout the world and new breeds were eventually developed for these fighting purposes. Modern dogs that can be linked to these breeds are the American Staffordshire Terrier, the American Pit Bull Terrier, the Bully Kuta, and the Gull Terr. Dog fighting eventually spread to Argentina and became the most popular sport in the city of Cordoba.

From the Bully breeds and the Terrier breeds that were brought over from Britain, the Argentinians began to breed their own dogs in order to perfect the breed for fighting purposes. The dog they bred was known as the Perro de Presa de Cordoba which means the Cordoba Fighting Dog. Dog breeds that were said to be used to develop the Cordoba Fighting Dog include the Fila Brasileiro, Perro de Presa Canario, English Mastiff, English Bulldog, Bullenbeiser, Boxer, and the American Pit Bull Terrier.

The Cordoba Fighting Dog could be bred to be a variety of colors although the most popular among the dog fighting sport was pure white.

This breed was known and trained to be the toughest dog in the ring, never submitting or backing away from a fight. They were inbred so much for the quality of dog aggressiveness that it was difficult to breed thereafter because males and females would rather fight than mate.

Other than fighting other dogs, this breed was used for hunting large game such as boar which was a major food source in Argentina. Boar were often difficult to hunt as they were large, dangerous, and determined not to be killed. The Cordoba Fighting Dog was one breed that was strong headed enough to kill the boar easily. Most of the time, the Cordoba Fighting Dog could not hunt in packs or else the dogs would end up fighting each other. They could sometimes hunt with one dog of the opposite sex but it was always a risk whether they would fight each other or not.

Because of this dogs extremely aggressive qualities, Antonio Nores Martinez and Agustin, his younger brother, decided to breed the Cordoba Fighting Dog with more relaxed breeds in 1925. Their breeding developed a dog known as the Dogo Argentino by mixing dogs such as the Great Pyrenees, the Pointer, and Dogue de Bordeaux with the Cordoba Fighting Dog.