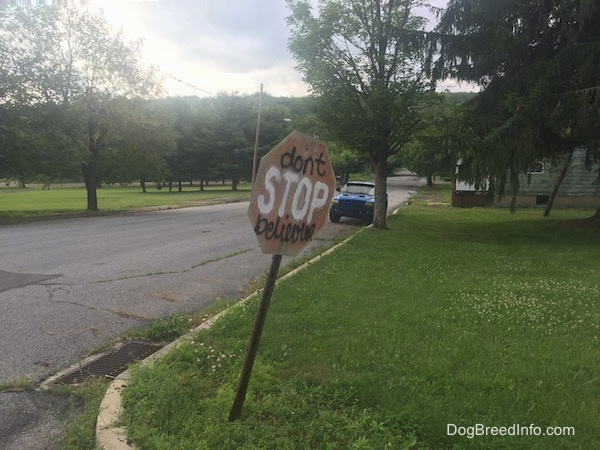 We visited Centrialia in June of 2015. I only spoted two houses left in the town, although there could have been another I did not see. On October 29th 2013 State and local officials decided the remaining residents could live out their lives in their homes, after which the rights of their properties would be taken from them by the goverment through eminent domain. Most moved out and had their homes torn down. The mayor, Carl Womer, was one who had decided to stay, until his death in 2014. 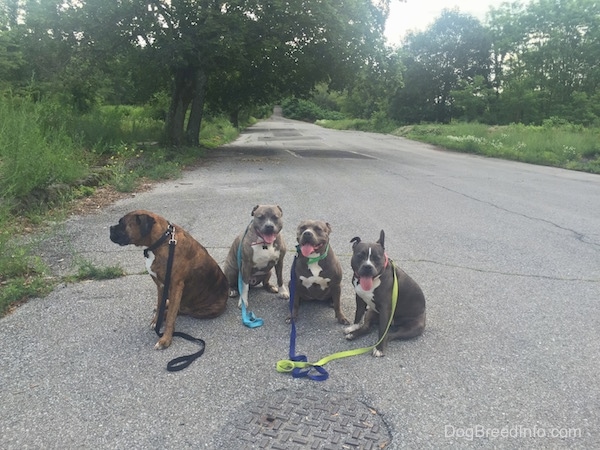 The pack of dogs on Park Street, in Centrialia PA, Bruno the Boxer, Spencer the Pit Bull, Leia the Pit Bull and Mia the American Bully. 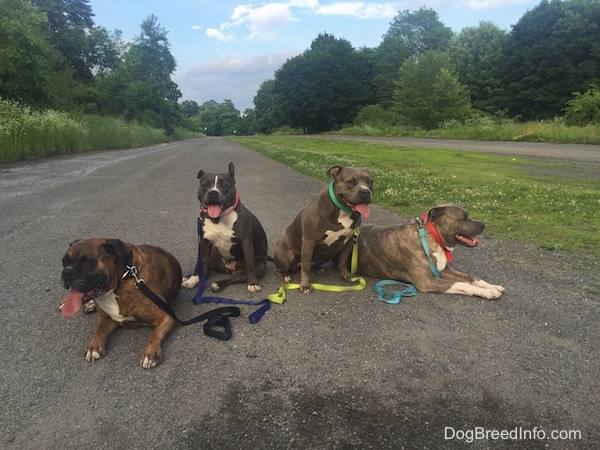 The pack on Railroad Ave, Centrialia PA, Bruno the Boxer, Mia the American Bully, Leia the Pit Bull and Spencer the Pit Bull. 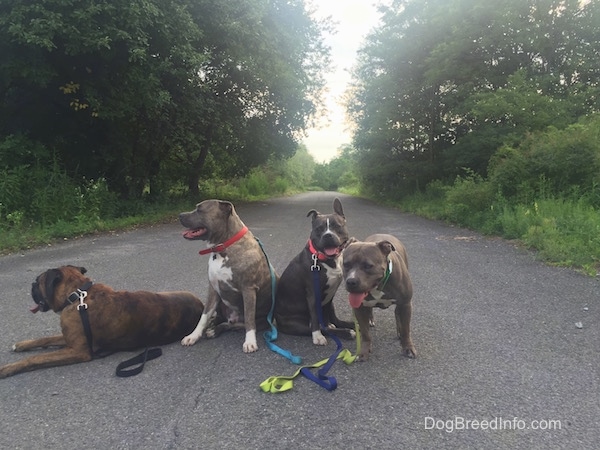 The pack on Railroad Ave, Centrialia PA, Bruno the Boxer, Spencer the Pit Bull, Mia the American Bully and Leia the Pit Bull. 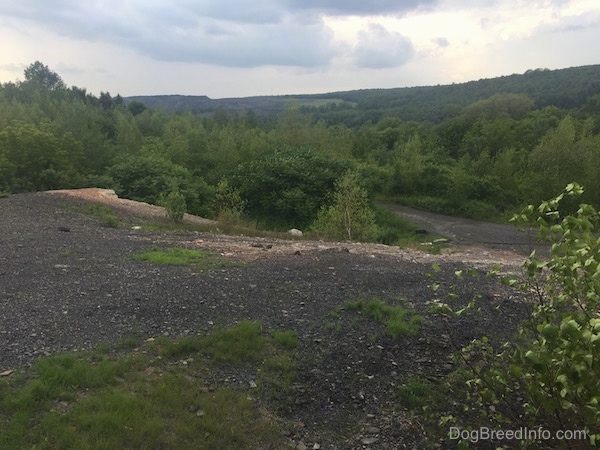 The fires are still burning underground moving along the coal vain, although it was difficult to locate the exact spots with the summer heat preventing the steam from being visible above ground. We will have to go back when the temperature is colder if we want to clearly see where the ground is the hottest indicating the active fire. 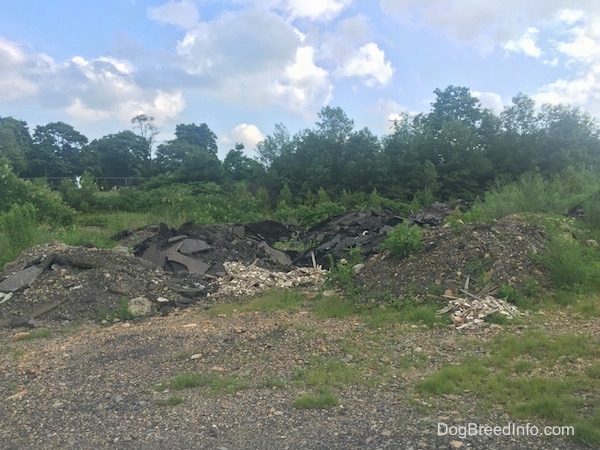 The town now seems to be just a tourist attraction and a place people ride their 4-wheel drive vehicles, ATVs and motorcycles. There is graffiti in various spots along with broken glass. The streets are crumbling and the asfult is bull dozed into piles. The town is gone. 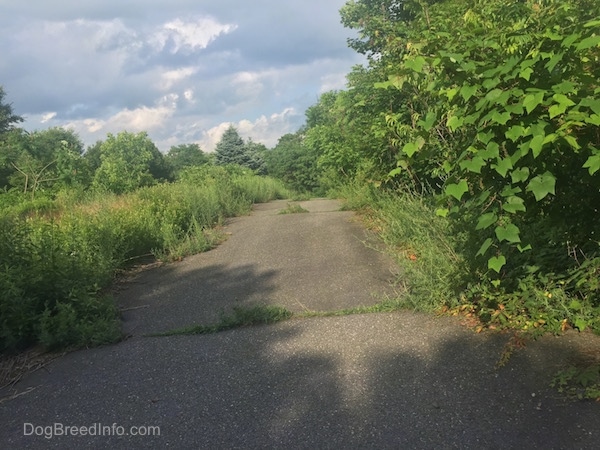 Nature begins to push its way back into grassy fields and woods. 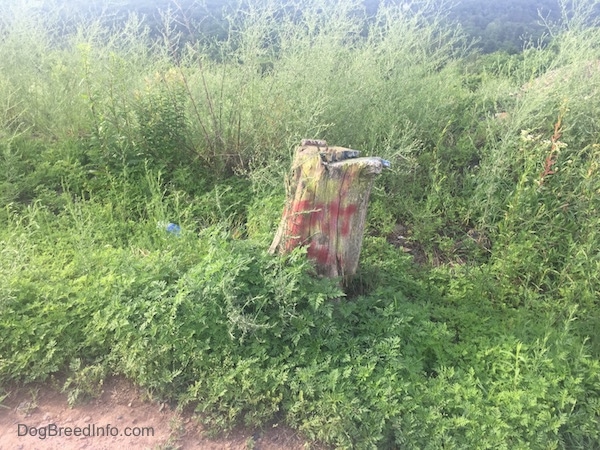 A tree stump with graffiti on it. 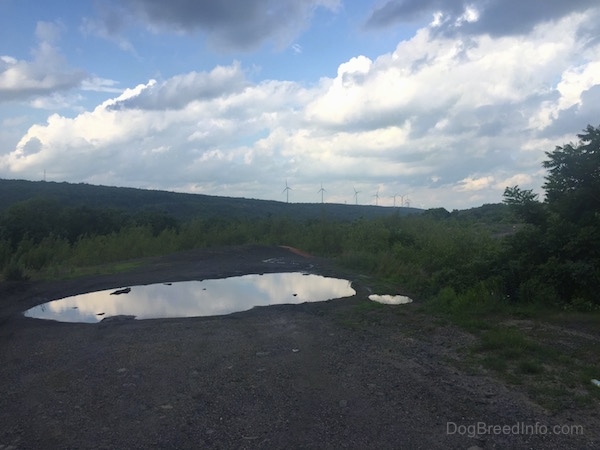 In the distance you can see windmills on Locust Mountain ridge in Mahanoy City, Schuylkill County, PA. From coal mining to a wind farm, the windmill project was completed in 2009. The wind farm was partially funded with $59 million in federal stimulus money, which makes one wonder if that would have been better spent towards putting out the underground fire before it spreads to another town. While the mills do generate 128 megawatts of electricity, which is enough to power 64,000 homes in nearby areas of northeastern Pennsylvania, the wind turbines are a danger to birds and bats. According to a study done by Dr. K. Shawn Smallwood, an estimated 573,000 birds and 888,000 bats are killed in the United States every year by wind turbines (windmills).

Birds are hit by the spinning blades, but oddly enough, the bats do not die from crashing into the blades. Their death is due to the sudden drop in atmospheric pressure around the windmill. It causes the bat to have internal hemorrhaging, a condition known as barotrauma. Dead bats are often found right below the wind turbines with internal damage. If enough bats are killed it will alter the natural echo system, as bats eat a mass amount of bugs, which greatly helps farmers and people in general.

This is the neighboring town of Ashland, PA in June of 2015 giving you an idea of what Centralia might have looked like had the underground fire not started back in 1962.