Raising a Puppy: The 11th Week in his New Home—Spencer the Blue-Nose Brindle Pit Bull

A day in the life with Spencer the American Pit Bull Terrier puppy. Spencer's 11th week—20 weeks old, 46 pounds, 18 5/8 inches from the ground to the highest point of the shoulders (the withers). Last night Spence wanted to go to sleep in his crate, however Bruno was in there. Spence had gone and lay down on the floor in the living room instead. Yes, Bruno squeezes into the smaller crates and goes to sleep, even when there is no storm or fireworks in the area. 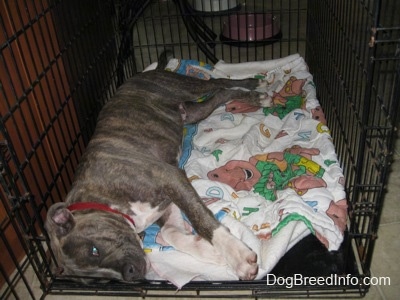 Well Spence, I do believe it is again time to change to a larger crate. Your nose is touching one end and your tail is hanging out of the other. 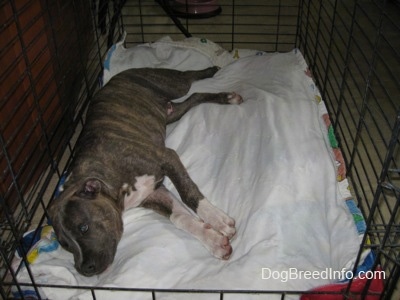 That's better. Brother Bruno will be pleased. Now the two of you can almost fit in there at one time. Almost. Spence I hope you outgrow the need for a crate before you outgrow this crate, because this is the biggest crate I own! 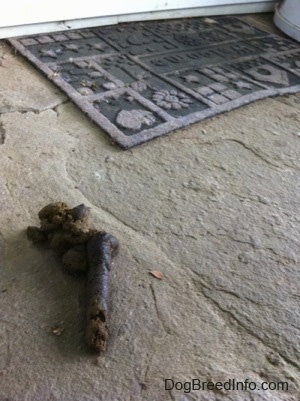 Oh come on, Spence, I thought we were done pooping on the porch?! The bright side is Spence has not peed or pooped inside the house since the last time I wrote about that on these puppy pages (knock on wood). It's been a while. He has even walked to the front door and whined when he needed to go out. Now that is progress.

The few times Spence jumped up at the front door to come back inside he was totally ignored; no response was given. This is a tough concept to teach since the humans are always inside the house and he is outside when it happens. Yelling at him or opening the door to correct him would have only taught him that there is some type of response when he jumps at the outside door. Jumping up at the door does not make the door open. When we hear him whine to come back inside we try and open the door right away to teach him that is how you alert us. Bruno and Spencer have a fun time playing with their toy, a game that has to be supervised because Bruno will lie down and chew off the cloth around the toy. 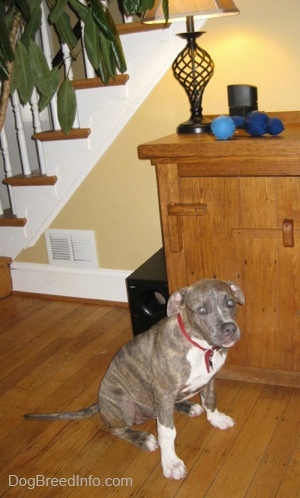 When it's time to come in I put the toys on top of the cabinet. Spencer obviously still wants the toys because the little sucker jumps up on the cabinet to try and get them. "Attt!" Besides the fact that play involving humans should always be started and ended by the human, this pup has to learn we NEVER jump up on the furniture.

Now I am not convinced this is it and he will never do it again, but this morning there were guineas hanging out in the driveway. Knowing Spence was outside I immediately ran down to see where exactly that pup was and to make sure he had not hunted one of them down. I was very pleased to see both Bruno and Spencer lying on the dog bed on the porch not paying any mind to the guineas. Good boy, Bruno for showing Spence how we do not eat our own birds. 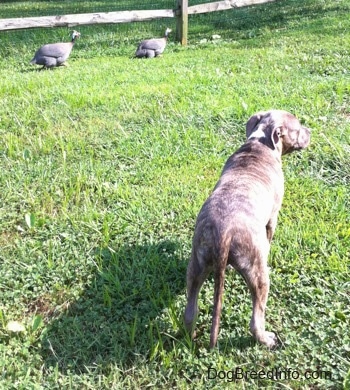 Later the guineas were out in the yard. I called Spence over closer to see how he would react near them. Spence's tail stayed hanging low, his normal relaxed position, and he turned his head to avoid eye contact with them; a submissive gesture. That is Spence saying to me and the birds that he has no desire to chase them. Not at the moment while his mama was watching anyway. 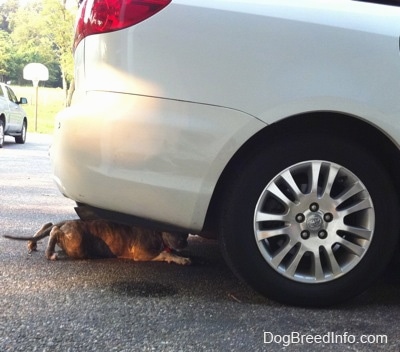 Um, Spence. What are you doing? Oh yuck, you crawled under there to eat some cat puke! You know you won't be able to fit under there for very long, so enjoy the puke while you still can. On second thought, get out from under there, you crazy pup! Spence lost another tooth. It fell out onto the kitchen floor and Sara picked it up. "Mom, Spencer's tooth just fell out!" 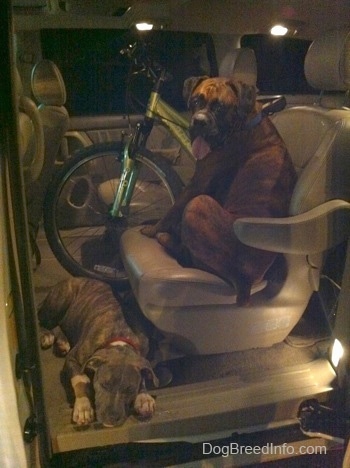 Tonight's walk tired the pup out. We walked for an hour and took a new route and actually passed about five other owners walking their dogs and a lot of others behind fences and on chains. Overall it was a good challenge for Spencer.

The dog that was tied up in the front yard was the biggest challenge for the pup. Several tugs on the lead, a "leave it" and for us to keep walking all helped him to keep moving forward and stop excitedly staring in the direction of the dog. There was no fence and the dog was running from side to side, barking like crazy. I am not sure Spence realized the dog was on a chain. We ended up passing that dog twice as we circled a dead-end block and the second time Spence was much better, and a lot less excited about it.

Spence got better and better with each dog we passed. He kept walking, but he still looked a little too much in the direction of the other dogs that were barking at him. Bruno, on the other hand, only glanced and kept trotting along.

Toward the end of the walk I spotted an owner with a Giant Schnauzer from across the street. The dog had stopped to poop and the owner forgot to pick it up, hmmm. As soon as the large dog spotted Bruno and Spencer he started whining a high-pitched whine until we were out of sight. The big fellow was leading his human on the leash, pulling toward us. The owner was sweet-talking him to be quiet, which was like saying "Good boy for behaving like that." Bruno only gave the dog a quick glance and Spencer looked a little more, needing a tug to stop him from reacting, and he kept walking.

Before ending the walk we passed three dogs inside a fenced front yard that were running their border, barking like mad. We had passed these dogs before on other walks and Spence did a great job ignoring them.

Spencer is not perfect on a leash, but thinking back he seems to be easier to handle than Bruno was at the same age. We still have some work to do, however. The goal is to get it so no correction is needed no matter what we are passing.

Only one of the five dogs we passed tonight was actually heeling on the lead, and sure enough that was the only dog that ignored Bruno and Spencer. Passing that dog was a piece of cake; Spence totally ignored it. The others that were leading their owners put up a fuss as we passed and in return would excite Spence. If Bruno can ignore fussing dogs however, so can the Spence-man, in time. 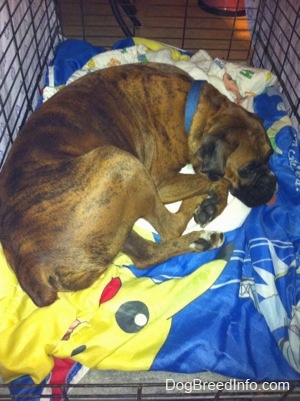 Just about every night I have to kick Bruno out of the crate so I can tell Spence to get in. The night I took this pic I walked up to the crate and Bruno started to wag is nub of a tail at me. Does he even know his tongue is sticking out? "Come on Bruno, time to get out." When Bruno comes out one command to Spence, "cage," is all it takes for the pup to happily walk into the crate and go to sleep. If my kitchen were bigger I'd put two crates in there, but that's not going to happen. Bruno, good boys don't need to be locked in crates. Now go to your dog bed and go back to sleep. 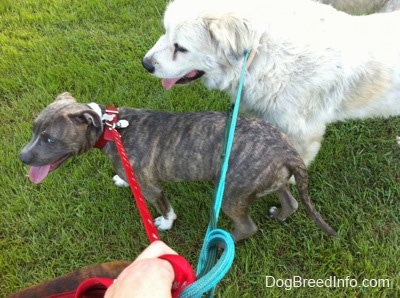 We had walked back to the skate park several times, but there had been no one there. This time however, the park was loaded with kids rolling and jumping their boards. Spencer's reaction to the park was very different than in the past. When he first heard the kids, the banging and rolling of the boards he perked up. He seemed happy about it. I kept looking down to observe his tail. It was bouncing up and down as he walked in its normal hanging position, which told me he was relaxed. Spencer's whole body was relaxed. He looked curious, happy to be there and not afraid in the slightest. Tacoma the Great Pyrenees, standing next to Spencer, used to be afraid of the skate park as well. She was an adult when she first encountered a skate park and it had freaked her out. Using the same natural dog communication as I did on Spencer I was able to tell Tacoma that the park was nothing to be afraid of. I stopped to get a picture of Spence and the pup sat down. He seemed to be enjoying himself. He no longer viewed these rolling humans as something to be afraid of. 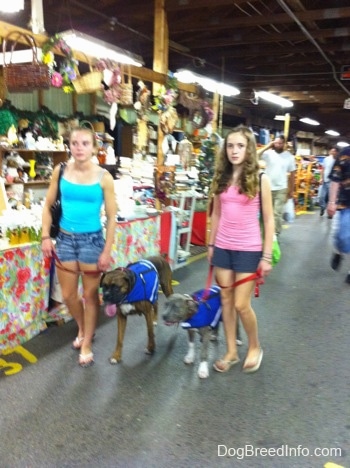 We take Spence and Bruno back to Zerns Farmer’s Market so Spencer can practice good manners in public. That means heeling at all times and no pulling toward anyone or anything no matter how exciting things may seem. No jumping, stay calm around people including small children even when they pet you. If you are walking past or near an excited person remain calm and follow your handler. No sniffing the ground or trying to eat things you might see. The pup did great. He's going to take after his big brother Bruno when he grows up. Bruno and Spencer wear their vests at the market. It not only makes the dogs feel like they are working, but it also keeps most of the humans around them from getting them all excited by talking baby talk to them or trying to start a playing match with them while they are on the leash. It's very hard to teach a dog to mind his manners if everyone around him do not mind theirs.