Raising a Puppy: The 19th Week in his New Home—Spencer the Blue-Nose Brindle Pit Bull

A day in the life with Spencer the American Pit Bull Terrier puppy. Spencer's 19th week—28 weeks old, 67 pounds, 21 1/4 inches from the ground to the highest point of the shoulders (the withers). 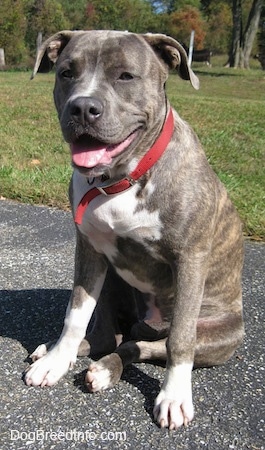 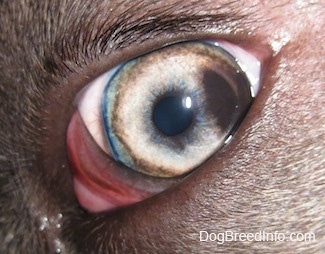 The brown spot in the pup's left eye. 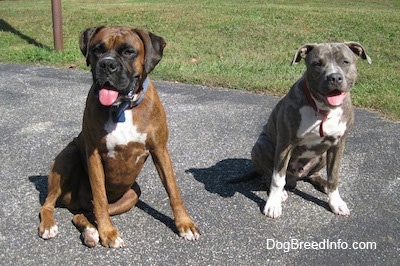 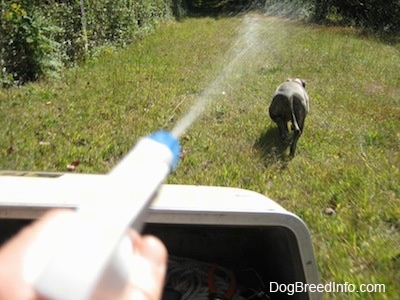 Spencer likes to follow along when we ride the golf cart through the trails and open areas of the goat field, which is great; it's good exercise for him. However he has a bad habit of cutting right in front of the cart as it is moving, making it hard to steer. Even though the cart is not moving very fast the driver of the cart has to constantly be hitting the breaks so he does not get hit. If you tell him "back" or ask him to move he just stops completely and looks at you, usually wagging his tail. He is totally oblivious to the fact that he is in the way. After dealing with this for a while with no progress I decided to try something new. I got a water bottle and made it "rain" every time he walked in front of the cart. It worked; the pup decided he would rather not be wet and started avoiding the front of the cart. Spence, besides it being not a safe habit to get into, you need to be following the golf cart, not trying to lead it. 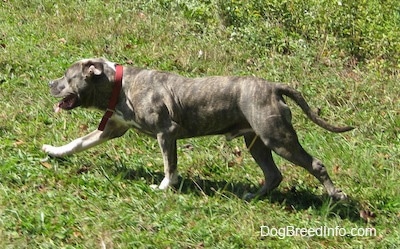 Spencer walking beside the golf cart. 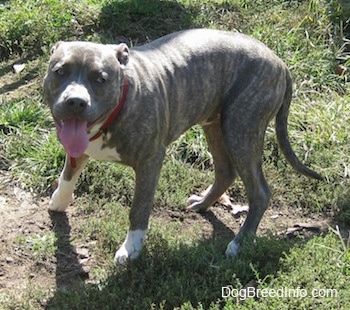 All the fencing around the goat field looks intact. Time for this tired pup to take a nap. 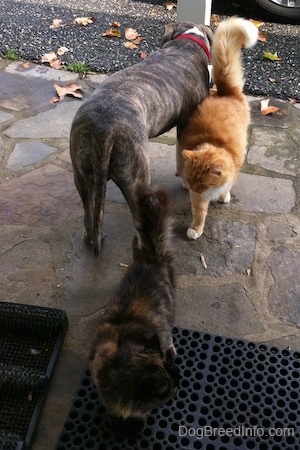 Spencer does very well with the cats. He is gentle and respectful just like Bruno, except... 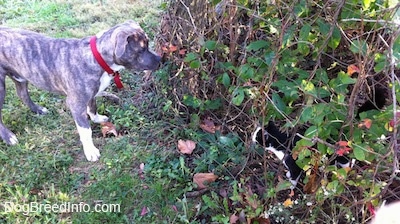 ...when it comes to the cat named Oreo. Spencer is not mean to Oreo in the sense that he wants to hurt her, but he chases her and barks at her. Oreo is not as relaxed as the other cats around the farm. She tends to have a “run first and assess the situation later” attitude, which makes Spencer want to chase her. I am working on teaching Spencer to leave her alone. Right now Spencer sees her as some type of game. The other cats that Spencer does get along with and respects are not only calm but have a "don't mess with me" attitude. I have seen him bark at them in the past and they just lay there calmly standing their ground. When Spencer had moved toward them they had given him a swat. They are his leaders through and through. Even the energy of a cat will affect the behavior of a dog.

Barking to Come in

I just realized that the pup associates barking at a cat with coming inside the house. I was looking out the window and saw him bark under my car at a cat. As soon as I said "Hey!" from the other side of the window he happily ran to the front door to come inside…as if that is how you get into the house. Too often he would be outside barking at something and someone in the family, myself included, would call him and let him in. This taught him that if you want to come in go bark at something and the door will open. Time to talk to the family about reversing this. He has to be corrected for barking at a cat, but not let into the house at that time. He can only be let in when he is calm and sitting nicely. I don't mind if he barks as an alert that he would like to come in, but just not AT something. When he is being let in and the door is opened for him he has to be invited to step inside, not just push his way into the house.

Respect at the Gate 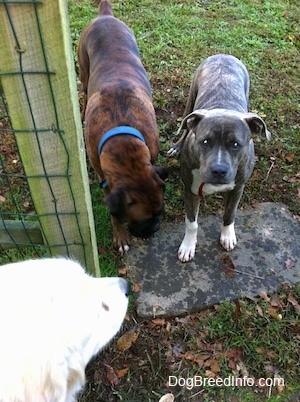 Well, you little tank of a Pit-pup. I opened up the gate to leash up the Great Pyrenees and the little squirt squeezed between my legs full-force to get in to see the Pys. I called him to go back out but he was so excited to see the Great Pyrenees that he ignored me and proceeded to lick up the Pys. I had to take him by the collar and lead him to the gate. "Out!" I had him facing the way out and pointed to where I wanted him to go. But the sucker didn't want to go. He just stood there at the gateway. I had to pull him by his collar to get him moving and walking out the gate. We practiced some good old gate manners after that. I opened the gate and told him to stay. This time he was a good boy. We will be practicing more gate manners and next time I will be ready for him. It is a big no-no to one, squeeze through a human’s legs to get where you want to go especially when you know you are not allowed; and two, not to go back out when asked. When he got into the gate he was very happy to see the other dogs, however had I allowed him to push me out of the way and stay to say hello to the Pys after he used those types of manners to get there, I would have been showing him that sometimes he can make the calls and do as he wishes. We would have been on our way to having an unruly dog that only listens sometimes. 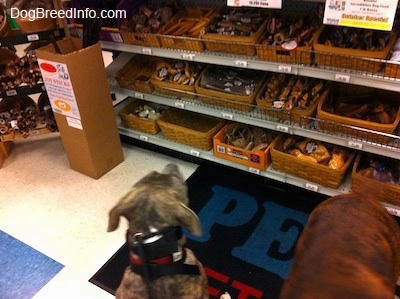 We like to walk to a local pet supply store to say hello and pick up supplies once a week. Inside the store there are bones everywhere. What a great discipline it is for the dogs to have them in a store with tasty, awesome smelling bones everywhere and ask them to leave it. It's like bringing a kid into a toy store and asking them not to open any of the boxes to all of the really cool games that surround them. This particular day while I was trying to pay my bill my boy Bruno helped himself to a bone on the shelf. Ah, I don't think so, Bubba. Set a good example for your kid brother. Give me that so I can put it back on the shelf or you are going to have to go out and get a job to pay for it! 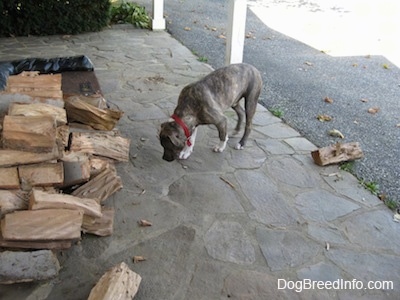