A day in the life with Spencer the American Pit Bull Terrier. 1 year 1 month, 79 pounds, 22 1/2 inches from the ground to the highest point of the shoulders (the withers) 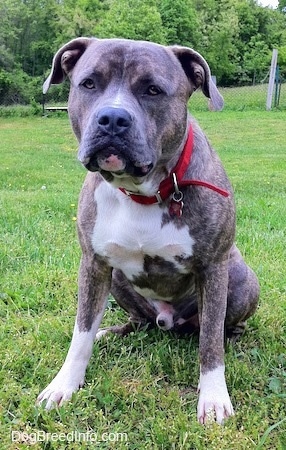 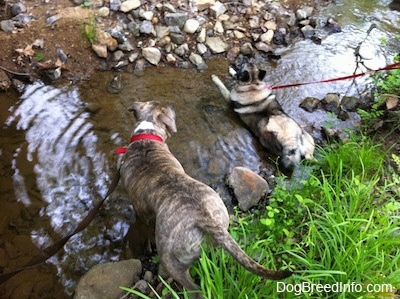 Spencer enjoys going for walks with his doggie friends. He is shown here cooling off with Tia the Norwegian Elkhound.

I have pretty much stopped using the word "No" with Spencer. Instead, when he is doing something he is not allowed to do I speak dog by making a growling noise and boy does he respond well. His response time to a growl is so much quicker than when I use human words because Spencer does not have to think about what I want. He instinctually knows that a low growl sound means stop doing what you are doing or what you are thinking about doing. For example, on one of our recent walks we passed a Chow Chow that was walking its owner across the street. The Chow went a little crazy, pulling toward us barking and growling. The owner was having trouble holding the dog’s leash. Spencer understandably was staring at the dog. When he perked up a little too much I let out a low growl noise to remind him that we need to keep walking and not respond in any way to the misbehaving dog. Spencer turned forward and kept walking. After we passed he looked up at me and wagged his tail. I gave him a pat on the side. "Good boy." I am very proud of the way he ignores other dogs, even when they are acting up and trying to go after him. He is confident enough in my leadership to follow me and listen when I ask him to ignore. When we pass other dogs who are misbehaving I don't even have to remind him. He simply ignores them. 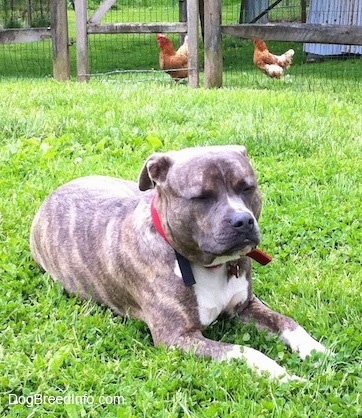 Spencer completely ignores the birds. The guinea fowl and peahens walk all around in the same yard as him and he doesn't bat an eye. There is a flock of wild geese that took up the pond in the horse field and he ignores them too. We have communicated to Spencer to chase the fox and groundhogs away, as fox eat our birds and groundhogs dig holes in the horse field that can break a horse’s leg. He takes his job seriously and can sniff out either animal with excellent precision. He runs right past the birds, wild geese and all in hunt of fox and groundhogs. We could have taught him to ignore the fox and groundhogs, but he is a valuable working dog that has saved the birds from getting eaten more than once. We once had a fox snatch up a kitten so he may have saved some cats as well. There would be groundhog holes all over the horse field if it were not for him. 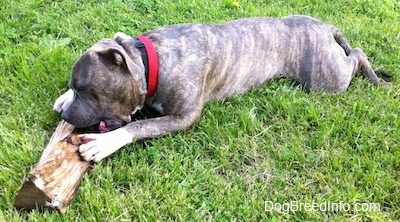 You silly pup, logs are for fireplaces. Spencer still loves to chew. Luckily he always goes for his toy bin when inside the house and picks a bone out of it. Outside he will find one of his buried bones or will sometimes take a log off of the log pile. 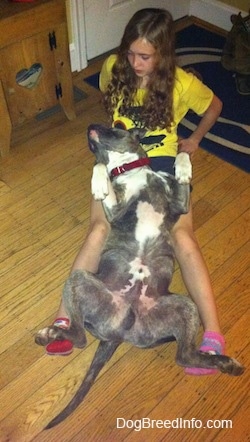 If you flip Spencer upside down and pull him up on your lap, either sitting on a chair or the floor, he relaxes, goes limp and sometimes falls asleep. You can rub his belly, play with his ears, look at his teeth, play with this legs and paws and he stays limp and relaxed. If you talk to him his tail starts to wag, but he stays relaxed. If you get close to his face you might just get a small lick in the nose. He is such a silly boy, very trusting and trustworthy.