A day in the life with Spencer the American Pit Bull Terrier. 1 year 3 months, 79 pounds, 22 1/2 inches from the ground to the highest point of the shoulders (the withers). 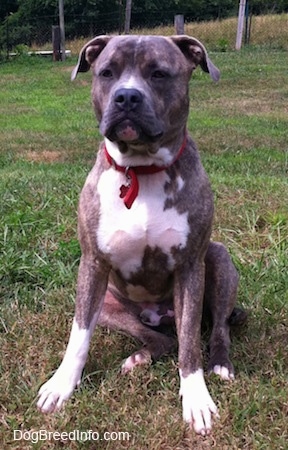 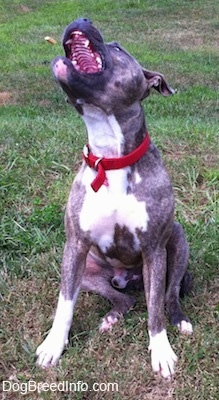 We get Spencer to sit pretty by tossing him a treat, telling him to wait and tossing him another treat. Spencer was caught on camera catching the treat. A millisecond later it was in his mouth! 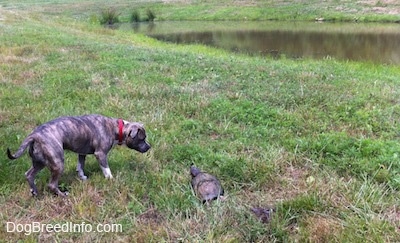 Spencer comes across a large snapping turtle in the field near the pond.

He is not sure what to make of it but he does sense he needs to be cautious. When he starts getting a little frisky I tell him to "Leave it." 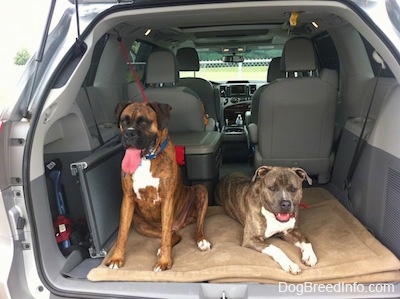 Spencer in the back of the van with his big brother Bruno the Boxer. Bruno is in the middle of recovering from TPLO surgery on his knee. He is at the stage where he needs to build up his muscle. Spencer goes along on Bruno's short muscle-building walks.

We visited a museum to walk the trails around the river and woods. It was a hot day and the many areas of shade were a relief from the sun. I noticed a good handful of people out with big professional cameras taking pictures of things like flowers and mushrooms. As we walked by one couple, I noticed out of the corner of my eye that it appeared a lady took our picture. I heard the shudder go off and the camera was facing our direction. Hmmmm, I was not positive, however and we kept walking. 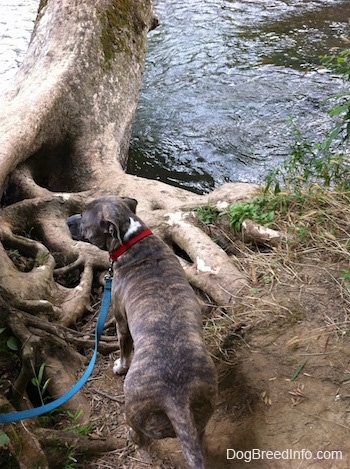 We walked the trails into the woods and along the river. 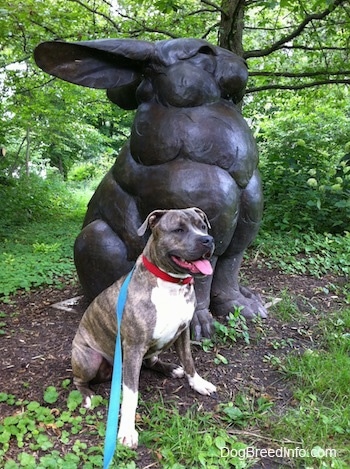 Spencer posed next to the bunny statue. He was not so sure at first but his mommy insisted so he gave in, realizing it was not so bad after all, as he smelled it and figured out it smelled more like a hunk of metal than a huge, monstrous bunny rabbit. 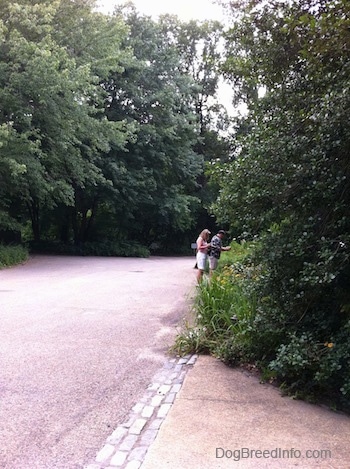 As we headed back to the van to leave the lady who I thought had taken our picture was up in front of us. She turned and this time the camera was facing directly at us as we walked toward her. It was a very large camera with a huge zoom lens so there was no mistaking it this time. I heard the shudder go off again in a series of three pictures: snap, snap, snap. I started to turn toward the lot where we were parked when curiosity got the best of me. I walked up to her and asked as politely as I could, "What are you going to do with my picture?"

She explained that she was taking a picture of the dog for an upcoming book called, "Dogs on Leashes." Spencer agreed to pose for a few more pictures before we headed out. Well, Spencer-pup, does this mean you're going to be famous with your picture in a book and all? 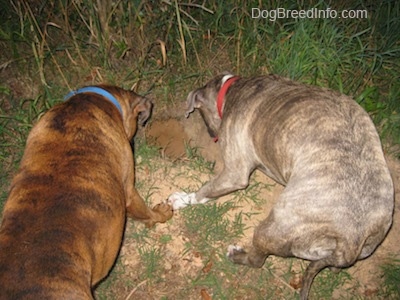 Something is down in that hole. Both dogs know it. Spencer is even more interested than big brother Bruno as he cautiously walks around the hole as if he is slowly inspecting it. There is a second hole not too far from this one and he inspects that one, too. Yep, there is a groundhog down there for sure.