A day in the life with Spencer the American Pit Bull Terrier. 1 year 6 months, 79 pounds, 22 1/2 inches from the ground to the highest point of the shoulders (the withers). 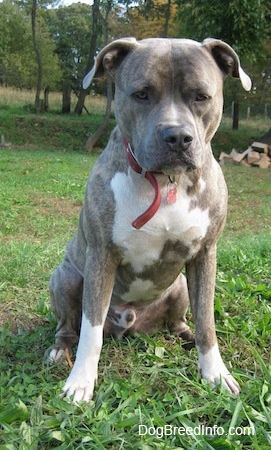 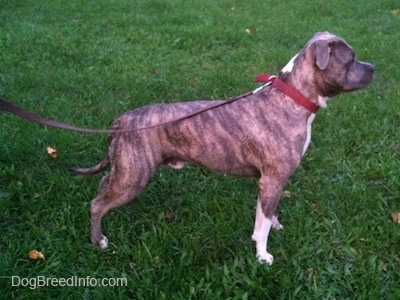 While on a day trip to the mountains Spencer spots a fox. He was told to stay and he did, but he wanted to chase it so bad his back legs started to shake. At home he is trained to keep the fox away from the chicken coop. Considering this, he was a very good boy to not even pull on the leash, but boy did he want to chase that thing. When we walked away from the area he heeled on the leash like a good boy, but he had a high stride to his step which let me know he was still smelling the fox. A few tugs on the leash and he snapped out of it. We are not working today, pup!

I noticed when I call Spencer while he is outside sometimes he just ignores me. I was thinking, why is that? My other dogs come right away but this guy seems to, at times, take his time responding. After thinking about it I realized that I have become relaxed when calling him. I will often call him when he is outside, not seeing where he is exactly and get distracted, not following through on my command. From this point on when I call him I have to go find him. Call him twice and then find him and make him come. If I do not plan on making it happen I have to rethink calling him in the first place. He is too smart to not follow through. He knows if he sometimes does not have to listen then heck, why not just see if this is one of those times? No more, pup, momma's stepping it up on ya!

In addition, at times I'm going to randomly hand him a treat when he does come; mix in some positive reinforcement with the discipline. What I can never do is punish him for coming too slowly. That's a good way to confuse a dog. Once he starts to come, no matter how long it takes him, there can be no correction. Whatever he is doing at the moment is what he will relate to the correction and I never want the act of coming to be associated with a correction.

If he does not come and I walk in his direction in my mamma-bear stance and he starts to come, I must back off by turning my body slightly to let him know that is all I wanted—for him to come. If he stops coming, I turn back in his direction. Another good way to make him come is to kneel down and call him. When he comes pat him on the side and scratch his back. That's positive reinforcement without the food which is always a good idea to mix in, as in most cases I will not have food handy. I will not hand him a treat if he takes his time listening; only when he comes running right away. When he looks like he is going to be taking his time listening I need to stop calling him and go get him. When I get him I cannot punish him; only lead him with me. If you correct or punish a dog after you go and get it, you will teach the dog to run from you. 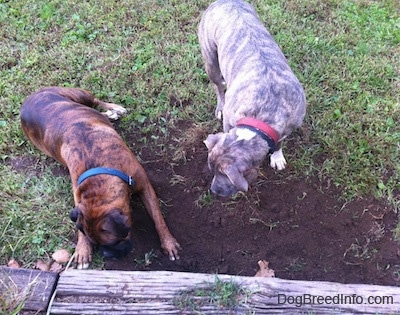 Oh boy, what are you two doing? That's a really big hole you just dug there! Yeah, yeah I know it was fun but the grass, the grass! 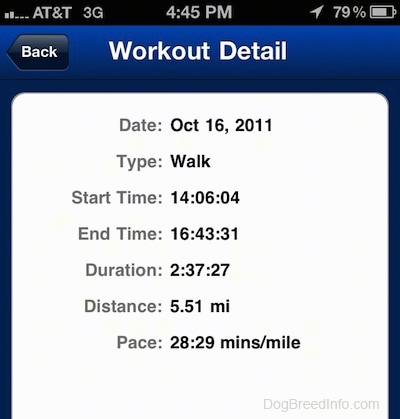 Spencer continues to go on daily walks. They are anywhere from one to over five miles long. On the walks he heels on the leash and it really calms his mind. The tracker above is from one of the longer hikes he went on through a state park. 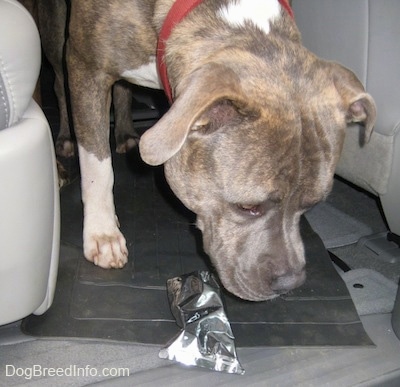 Spencer-Puppy you were only in the car for ten minutes while I ran into the store and you decided to bite a hole into my juice box and start drinking it! Water for you; juice is for me! Got it?! 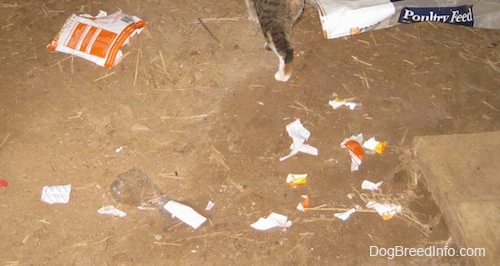 Now I can't prove this one was you so I will just point out the facts. You somehow got down to the lower yard where there is access to the barn where the dog food and treats are kept. That's fact. I was looking for you and there you were, behind the wrong fence.... Later, when I went down the treats were chewed open and all eaten up! A half a bag of sweet potato chips. 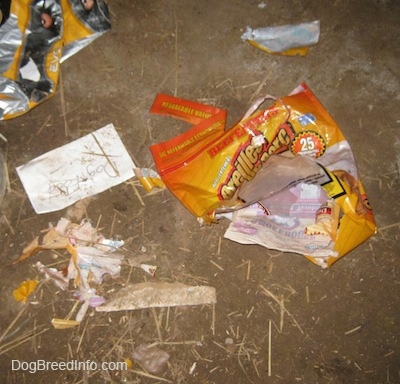 This pig ear bag was empty, but someone or something thought it smelled awful good and chewed the bag up. OK the other night I also spotted the fox down in that lower yard. So this was either the work of a fox or you. I just don't think a fox would eat the sweet potatoes so I am leaning toward you. Let’s see how hungry you are at dinner time! I'll also be checking out the color of your poop tomorrow. If it's really orange it's a good indication you got into that sweet potato bag.

OK Spencer-Puppy, I am sorry for blaming you. Apparently the chewed-up mess in the barn was first spotted early in the morning before you even got up. Now I am thinking maybe a raccoon? In any case, you still chewed my juice box. You were busted on that one!