A day in the life with Spencer the American Pit Bull Terrier. 1 year 10 months, 79 pounds, 22 1/2 inches from the ground to the highest point of the shoulders (the withers). 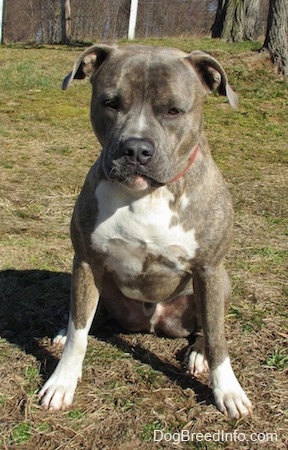 Talk About Some Loving

I have to remember to get my camera out before I unlock the door when coming home. It's after I watch how Spencer-puppy reacts to our return home that I think about recording him. In this video, we had just come home from eating dinner. That brown bag on the floor contains leftover Chinese food, yet the pup does not even take notice of it and you know he can smell it. He is more interested in getting his toy and with the utmost respect, saying hello to his fellow pack leaders. Spencer always brings us a toy; it's like him sharing his hunt with us. His head stays low, his tail wags. He's happy to see us, yet he is respectful and calm in his own right. He's a very stable-minded dog. The dogs that dance around super excitedly may be happy, but that does not mean it's a healthy happy, not in a balanced kind of way. They are happy in an unstable way; they either lack exercise or have some other issues they are not secure about. It's usually stress. A lot of dogs are happy to see you return home, not because they love you, but because they are the leaders and their followers finally returned. It's the type of happy where for an hour you thought your best friend was dead and they showed up healthy and happy as can be. It's happy, but not a healthy happy. It's very stressful having to worry about all your followers leaving you, a very stressful homecoming for a lot of dogs. Spencer does not have this stress. His happiness is a submissive, relaxed happiness. He's greeting his leaders instead of relieved his followers are alive and well. A lot of dogs are excited to the point of giving themselves a headache when their owners come home. If you are not sure if your dog’s excitement is a stable minded type, try acting just like your dog when you return. If it gives you a headache the way you have to jump and run around in the greeting, chances are it's not a healthy reaction. 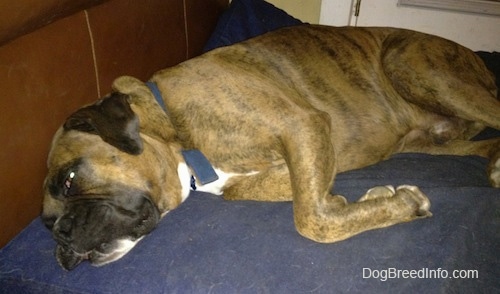 Where's Bruno, you wonder? Well, he was too lazy to get up. He's not always that lazy but the four-mile walk he had earlier did him in. He did get up later on to go out and pee, but he was just happy to lie in his bed and sleep. Now that's one secure, stable-minded, happy dog. Did I mention lazy? "Shhhh, I'm trying to sleep here!" Not sure what I mean? Think about it this way: when your spouse, child, sibling, parent or friend comes home, do you feel the need to jump around like a mad human? Or can you just be happy they returned safely without making a scene about it? 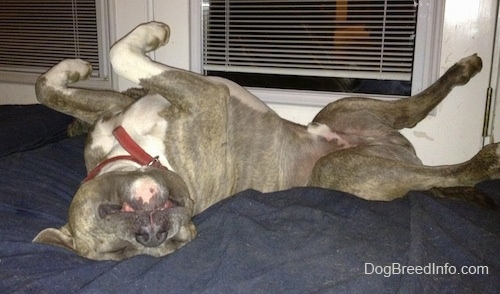 After Spencer was finished saying hello he went back to sleep, too. 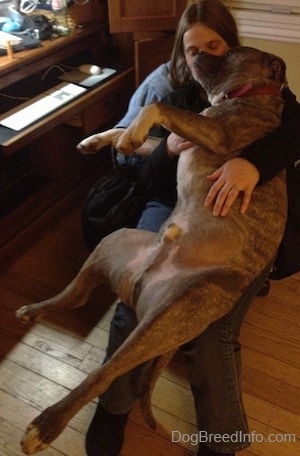 Who says he can't be a lap dog?

Bruno and Spencer! Just what do you think you are doing??!! That is a toy ball, not a tug-of-war toy! And Bruno you are so lazy that you play lying down while Spencer drags you all over. You guys are going to put a hole in that thing! 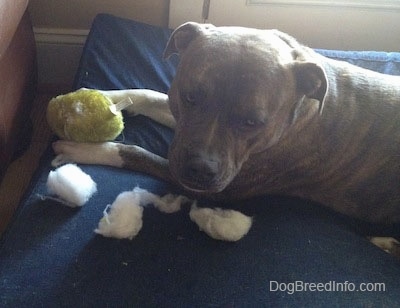 Too late...this is why plush toys and large dogs do not mix. Spencer-puppy, please don't chew your toy ball like it's a bone! Give me that. I just bought that for you yesterday. You and Bruno tore it during your game. Look at the stuffing coming out! Now it's trash.

Once in a while this pup will still take chase at a cat. Most of the time he doesn't; he's just fine, but once in a while he decides to thrill himself. I was outside picking up some firewood to bring in to the fire. I looked over and there he was sitting in the yard with his back toward me. He was looking at a cat. In the second it took me to contemplate whether he was about to chase something or whether he was just looking, the pup took off. Without even thinking I started a loud growl, "grrrrrrrrrrraaaaaaaaa!!!!!!!!!!!!!!!" and moved in his direction. The momma-bear mode was on. Spencer skidded to a stop, turned and looked at me. The cat stopped as well, right at the fence without jumping over it. Spencer lowered his head, wagged his tail and walked toward me as the cat sat there watching the busted pup. I turned away from Spencer and headed for the house to let him know that I was no longer in correction mode; that was all I wanted. In seconds flat he was next to my leg so close I could touch him. With his head still low and his tail still wagging, he followed me into the house. He's only a year old. I suspect that if we keep on him he will soon no longer chase them like that. The fellah is out there walking around chickens, peafowl, guinea fowl and cats on a daily basis. Bruno has learned never to chase what belongs here. I believe in time Spencer can as well so long as we keep on him. 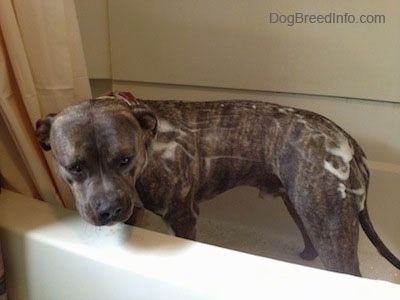 I was out tending to all of the animals. I had come back inside and realized that Spencer was still out there somewhere. I went back out and called him to come in. "Spencer!" Where was that pup? We had a worker on the property and I was hoping he had not let Spencer out the back gate that led to the woods. "Spencer!" Darn. I didn't see him anywhere. I walked back inside for a second, grabbed my coat and phone, called Bruno and we were off to find the pup. Just as I got to the front yard I turned and there he was—on the wrong side of the fence, wagging his tail. “Here I am, mom!” Oh my gosh, Spencer how did you get over there? I let him back over and we all walked into the house. Spence was in one of his very happy moods, like a kid who just got a new toy and was about to open it. What's got into you, pup? We had already taken a three-mile walk earlier in the day so his excitement was not pent up energy. Something had him all happy. You silly boy!

Sniff, sniff, what's that smell? Did I step in something? I checked my shoes. They were clean. I smelled my sleeve, had I touched something? I walked around the house; did Bruno go to the bathroom inside when I was not looking? Then it hit me, the smell was coming from Spencer and Oh My Gosh was it horrid! It was all over his back, his neck, around his ear and on his collar and it was still wet. I gagged. Just then the UPS guy pulled up and Spencer perked up wanting to go say hello. Oh no, no way I am letting you out to get petted by the UPS guy. That's just wrong. There was only one thing to do. After getting my package and praying Spencer would not rub against anything in the 30 seconds I was gone, I hauled his butt upstairs to the tub. Spencer had rolled in some kind of poop and it was an awful, and I mean awful, smell. There is poop and then there is POOP. This was POOP! 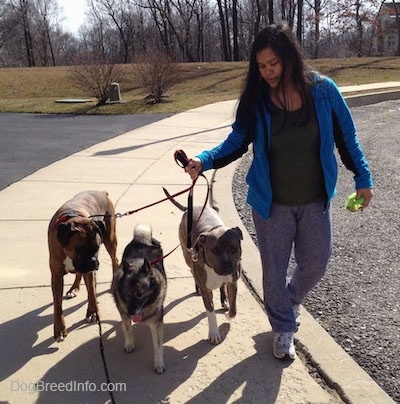 Bruno and Spencer still enjoy a daily pack walk ranging from one to six miles a day. This particular day they walk three miles with their friend Tia the Norwegian Elkhound. Every day we think of a new place to walk. We drive somewhere, park and walk. Going somewhere new not only satisfies the migration instinct of the dogs but it keeps it interesting for the humans as well. 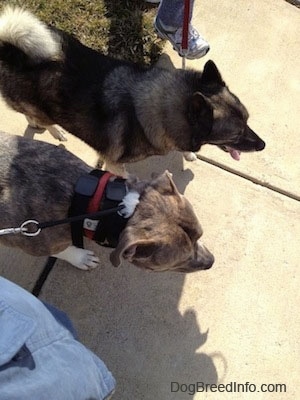 Spencer and his friend Tia the Norwegian Elkhound.

Spencer continues to present gifts to anyone who comes to visit. From the UPS guy, FedEx guy, mailman to friends, the pup quickly searches out something he can bring them. Since it's winter and there is firewood on the porch he often will grab a log and bring it to the person. He lowers his head, puts his ears back and curls himself to the side. His tail is low but wagging and he has pleasure in his eyes. His entire body says it is a submissive gesture. It is as if he went hunting and he is sharing his prize with them. He will allow anyone to take whatever it is out of his mouth. He happily hands it over and he happily takes it back if the person hands it back to him. 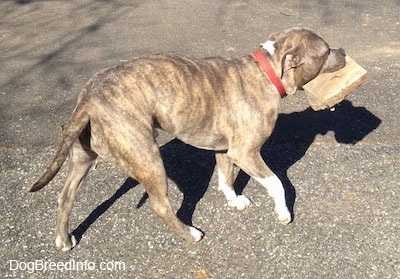 Notice how his head is lowered. His tail is held low but not tucked under. 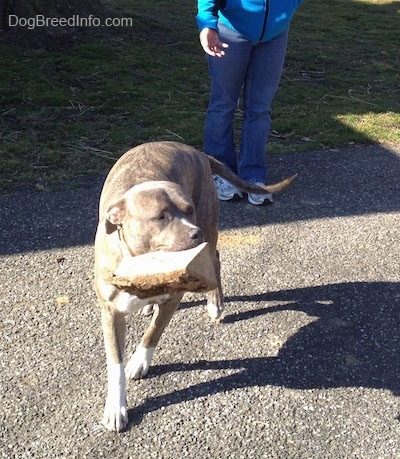 He walks all around the visitors, showing them his prize. 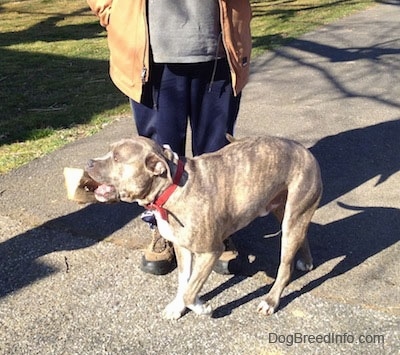 He's so proud of himself to have such a great gift. He submissively prances around with it, showing it off.

Sometimes we call him into the house with the log and he will carry it over to the fireplace. He drops it when we ask him to. When his pack comes home after being gone he does the same thing with one of his toys.