Raising a Puppy: The 20th Week in his New Home—Spencer the Blue-Nose Brindle Pit Bull

A day in the life with Spencer the American Pit Bull Terrier puppy. Spencer's 20th week—29 weeks old, 67 pounds, 21 1/2 inches from the ground to the highest point of the shoulders (the withers). 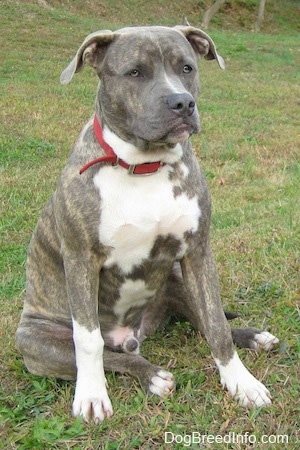 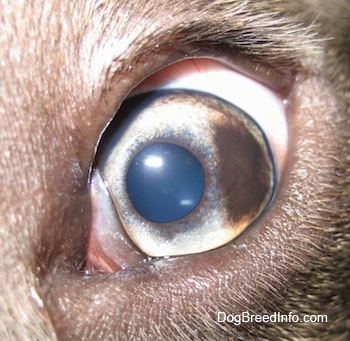 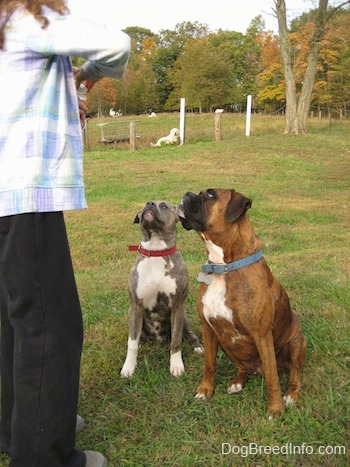 Spencer and big brother Bruno waiting for a treat. 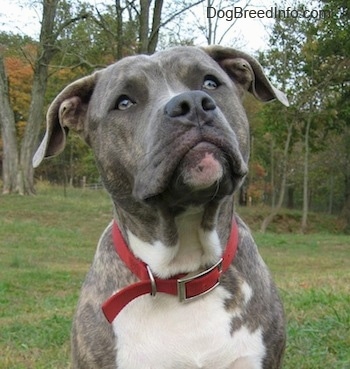 Spencer seems to have caught on very quickly that when he barks at a cat he does not get let into the house. I have been observing him out the window and he has been barking to come in at the door, then he turns his back to the door and sits down and waits. When the door is opened we make him wait for a second or two and then invite him in. In order to change the learned behavior of him barking at a cat to get the door to open took the entire family's participation in not letting him in when he barked at a cat. Had one family member continued to let him in when he barked at a cat we would not have been able to change his behavior. 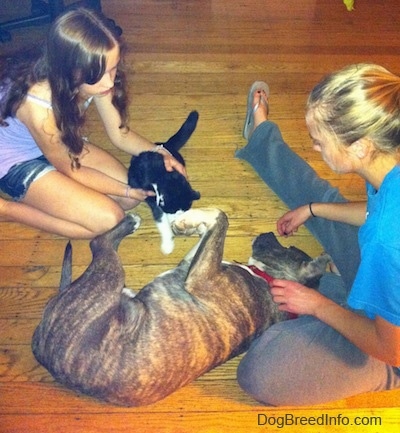 Sara brought Oreo into the house. When Spencer started to get very excited as if he would not mind a good chase, Amie had Spencer lie down and relax. He is not quite relaxed in this picture but he did soon relax right after it was taken. 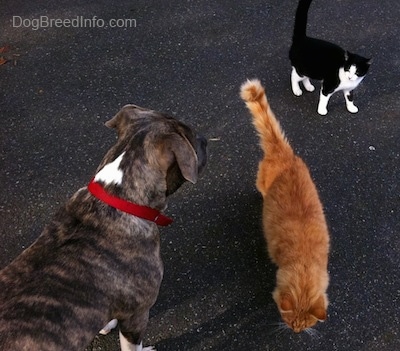 A couple of days later...I walked out the front door with Spencer. There in the driveway was Oreo the cat. I waited for the two of them to spot one another. When Spencer saw Oreo his ears perked. Oreo suddenly looked like she was about to run and Spencer looked like he might take off any second. I put my hands on my hips, took a step toward Spence, said "Leave it" in a calm but firm tone and thought in my head, "Don't even think about it!" as mamma bear as I could muster up. Oreo had her eyes locked on Spence. Spencer turned and looked at me and I put on by best "I dare you to even try it" face. I could feel the mamma bear coming from me, so I know Spence could feel it too.... But was it enough to convince the pup? 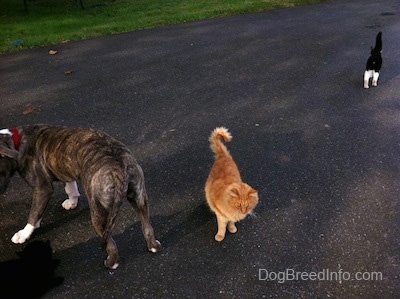 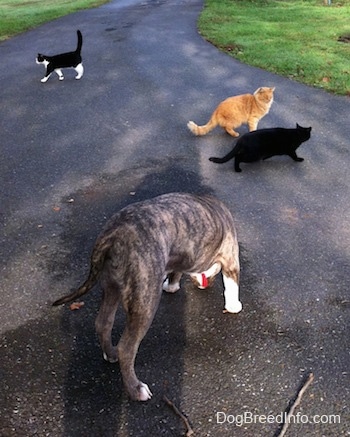 And life went on at the farm with no cat chasing. My husband told me that Spencer looked like he wanted to chase the orange cat named Sandy, shown above, yesterday, but Sandy stood his ground and when Spencer let out a playful bark Sandy swatted him right in the nose and that was that. Spence had walked away from the cat that was his own grizzly bear. Just what the pup needs, pack leaders all around him. :)

We were up in the mountains in a field. There was a dirt road that is not heavily traveled down the hill. When a person rode by on a bike Spencer got excited and took off running toward them. I called him back and he did not immediately respond but did come back after I started to chase him. He never made it all the way to the person on the bike, but that was a little much; a big no-no. We had been working on this issue while on walks hoping people on bikes would ride by so we could tell him to leave it. That approach obviously was not invasive enough. We needed to tackle this issue even harder. I gathered a couple of bikes and a scooter. When Spencer saw the first bike he came running over. I asked him to "leave it" and give me space. From that point on he ignored the bikes. Next step, as soon as I get some air into those tires I am going to have the kids ride them in front of him. 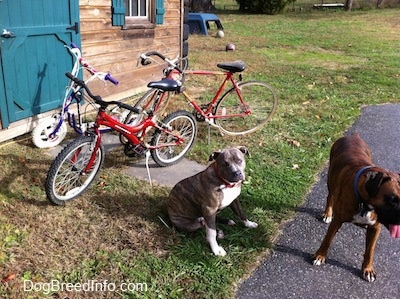 Spencer gets used to seeing bikes up close.

When we got air in the tires and started riding the bikes around it was another story. Spencer wanted to chase the bikes something awful. He pulled toward them, even while on a leash. When we told him no he started to wine and shake in anticipation. He kept protesting. Not good. He cannot grow up thinking it is OK to chase bikes. 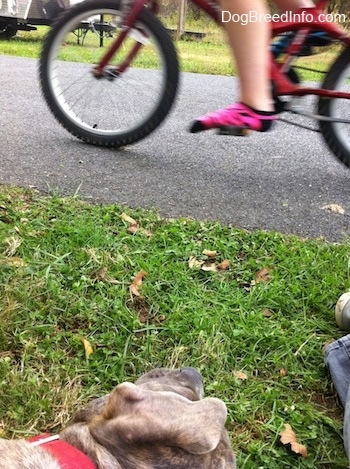 We had Spencer lie down in the grass and made him stay while two people rode bikes around him. He had to lie there until he was able to act like a civilized pup around a moving bike. 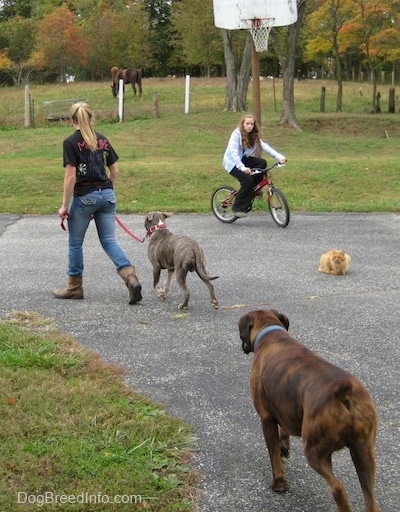 After over an hour of him being asked to not chase a bike and him wanting to do it so bad he shook, he finally calmed down. We then told him he could get up and we walked him while riding bikes past him. After trying a couple of times to lunge toward the passing bike and being told to "leave it" he finally was able to have a moving bike pass him without reacting. Bruno: "Hey wait for me! I want to walk too!" 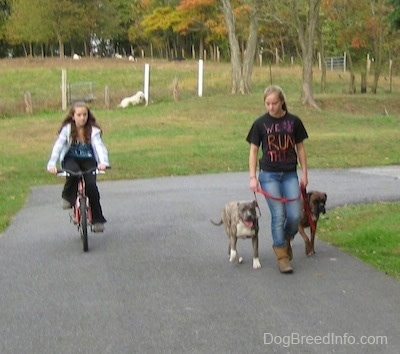 Bruno wanted to walk along so we put a leash on him too. Maybe his kid brother can learn something from him. 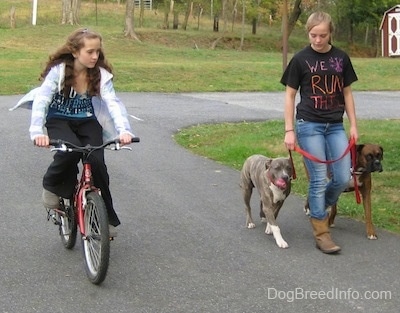 Another pass on the bike. After a bit I noticed when the bike would pass Spence would look up at Amie for direction. He wanted to please his pack leader very badly, yet that hunk of metal with that human kept gliding past, and those wheels, oh those spinning wheels! Yet the pup chose to please and did not lunge toward the bike. That was the right choice, young one.

A pass in the opposite direction. After working with the pup for a total of two hours he finally had a big improvement in his reaction to bikes. The fact that it took this long to get him to stop this behavior tells me that just having him pass a bike here and there on our walks would not have been enough. This was an all-out obsession of his. Seeing a person glide through the air on some hunk of metal with wheels had been a little too much for his brain to comprehend.

Later the same day I asked him to sit down in the driveway and I rode a bike in circles around him (no one was holding him there; he stayed on his own). Then I called him to me, petted him and then asked him to back up and sit down again. Once again I circled him with the bike, then rode the bike to the porch, got off and asked him to come. He ran over happily. That in itself was a huge improvement.

Even later the same day we went for a walk through town. A kid on a bike passed us a few times and guess what? No reaction whatsoever from Spence.

Major improvement. I am going to keep the bikes out on the porch and ride them often around him, asking him to ignore them. We will be working on this over the next few weeks. I want him to not give a moving bike a second look, yet at the same time not be afraid of them.

Respect at the Gate 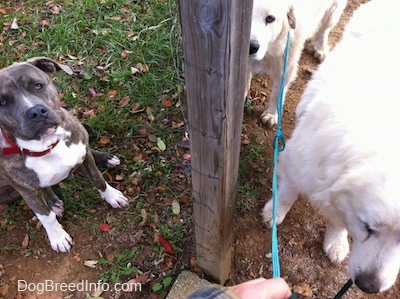 I have been paying close attention to Spencer when going through gates so I can stop him from squeezing through should he try. So far he has not tried it again. He stands there on the other side of the gate waiting to see if he will be invited, which often he is not. In the picture above I was leashing up the Great Pyrenees for our morning walk. I asked Spencer to wait on the outside of the fence while the door was open. He was not invited to go through the gate and he sat and waited like a good pup. 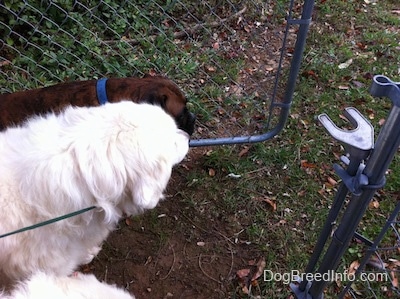 After they were leashed up and ready to go we went to the gate that led to our path. I pushed the gate open and asked the entire pack to wait before walking through. Spencer was behind the other dogs and didn't even try and get through. The older dogs knew the routine and it only took a "wait" command to get them to relax and wait quietly. I walked through the gate first and then invited them all to follow me.

Update: A few days later when I was trying to leash up the Great Pyrenees for a walk the pup tried it again. He attempted to squeeze through my legs but I was ready for him. I body blocked him and sent him back. Score for me. Working on the squirt’s manners is an ongoing thing.

I saw Spencer lift his leg to pee for the first time today. That is a sign that he is maturing.

We were on a road trip with the dogs and passed a pack of alpaca behind a fenced pasture. When Spencer spotted them he growled and let out a bark. I immediately told him I did not agree with that reaction, "Hey! No! Leave it! Grrrrr...." Spencer quieted down and watched as we passed the funny-looking creatures. It would be a big mistake to let a reaction such as that slide by and allow him to think it is acceptable to bark and growl at the unfamiliar, although in hindsight thinking about how funny-looking they were part of me wants to laugh; they were so well-groomed they looked like Sesame Street Muppets. Perhaps that is why he decided to bark in the first place; because he sensed how the humans were feeling about them. 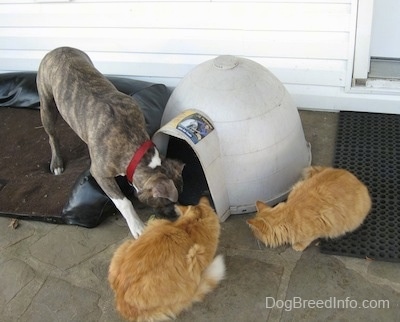 I walked outside to call the pup in. "Spencer, here boy." Spencer came running over but I quickly realized he was not heading to the door, he was chasing something. Oh my gosh, it was a mouse. Spence caught the little sucker with lightning speed and excellent agility. He stood there looking at me with a live mouse hanging out of his mouth. The mouse squeaked and moved around as he held it. He was surprisingly soft mouthed with it. Nonetheless I didn't want him to eat it, "Drop it!" Spence dropped the mouse right away and it ran under the cat igloo. Spencer and the cats hung out for a long time keeping an eye on the spot that the mouse was hiding. I have come to the conclusion that the pup is a better mouser than our cats! Must be the terrier in him. 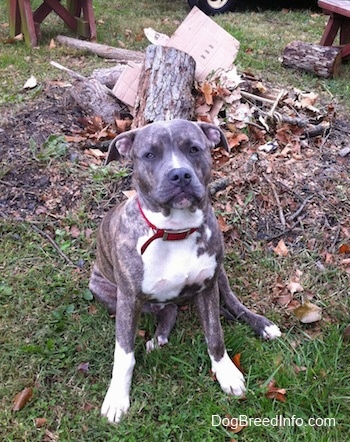 Someone had put a cardboard box in the fire pit and the little stinker pulled the box out and chewed it up. I had picked up all the pieces and put it back in the fire pit. 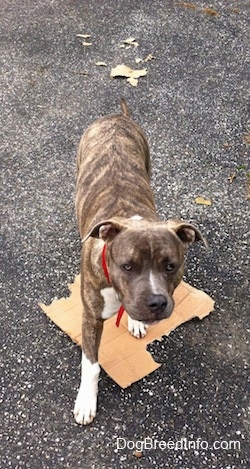 Later, parts of the box were back in the driveway. Um, No! That is not a good puppy. Here, take a bully stick instead. I tossed him a bone to chew on.