Raising a Puppy: The 22nd Week in his New Home—Spencer the Blue-Nose Brindle Pit Bull

A day in the life with Spencer the American Pit Bull Terrier puppy. Spencer's 22nd week—31 weeks old, 71 pounds, 21 3/4 inches from the ground to the highest point of the shoulders (the withers). 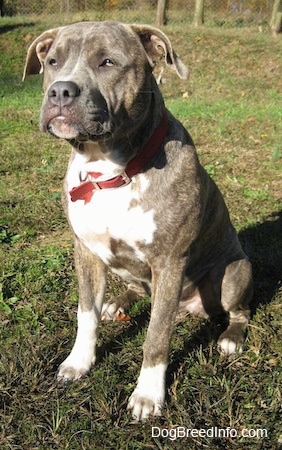 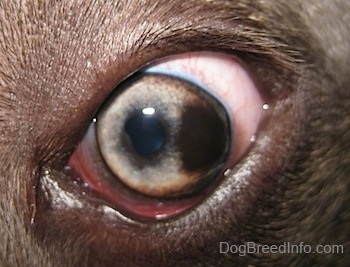 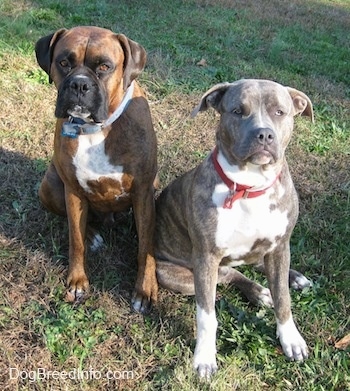 Our Walk and Chasing Bikes 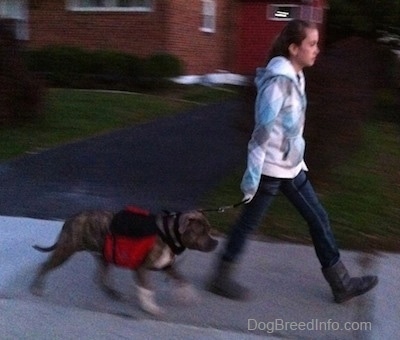 Spence's natural pace tends to be a step faster than mine. I am constantly reminding him to slow down a bit. Today's walk was going to be a little shorter than normal, so I put a backpack on him to not only slow him down, but tire him out in a shorter amount of time.

While on the walk we passed a couple of kids riding their bikes. The kids were happily and excitedly calling to one another. Spencer looked at them with his ears perked and then changed sides, but continued to heel. He went from walking next to Sara, closer to the bikes to walking next to Sara, farther away from the bikes. He was still looking at the bikes, but not in an obsessive kind of way. He was more curious. Avoidance and a score for the pup! We went from an intensely focused dog that would shake with anticipation and bolt, to a dog that watches with curiosity and avoids. Avoidance is the next stage closer to our goal, which is to ignore, and we are well on our way to it. 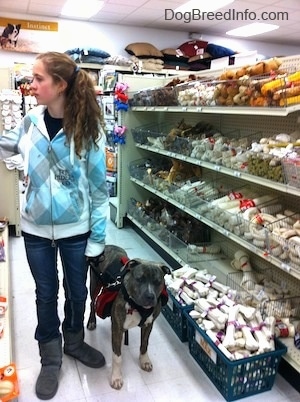 Our destination? The pet supply store, where Spence was a very good boy and didn't try and steal any tasty treats off the shelves. 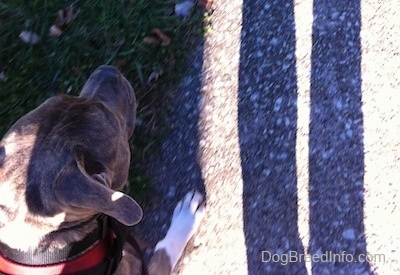 On another walk, we passed a Shar-Pei that was on a retractable leash. The owner was just finishing up picking up his dogs business so we walked around giving them enough room to finish up. As we passed, the dog pulled toward us growling. Spence was on alert. His ears were perked and he was staring at the growling dog. I could tell that any second the pup just might pull ahead. "Grrr, leave it! Attt..." Spencer took his focus off of the dog and looked at me. Then back at the dog. "Leave it, grrrrr..." Spence took his eyes off of the dog again and we continued to walk.

I am finding when I make a low rumbling noise at Spence it does wonders to break his focus on whatever he is thinking about pulling toward. Later on the same walk it worked amazingly well while passing a squirrel. 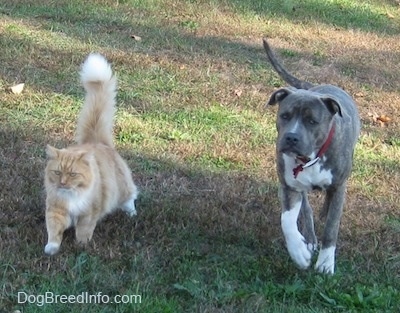 Spencer walking with his pal Pumpkin aka Lumpy. Just who would you guess is the pack leader of that little duo? You guessed it, the cat and Spencer is just fine with that.

Spencer is outside with the cats. He suddenly decides he wants to mess around with one of them. I can tell he is up to no good as soon as his tail goes up. Notice in the very beginning his tail is down, but as soon as he turns back to the porch and sees the cat behind the bench the tail goes up. I knock on the window to try to get his attention and stop him. That was not good enough, his tail is still up which means he is still thinking about getting the cat, so I open the window. It is not until I start to open the window that he gets the full message that I do not agree with what he is doing. I can tell he gets the message because his tail goes back down and stays there. When a dog's tail goes up it indicates that it is in a dominant frame of mind. 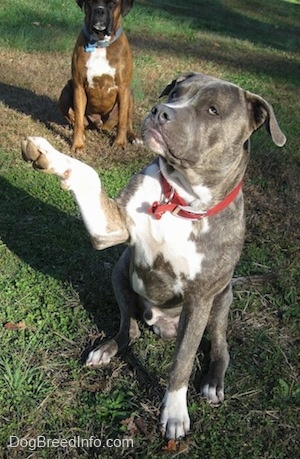 Sara was holding a tasty treat and asked Spencer for his paw.

Those who have visited Bruno the Boxers Raising a Puppy section will notice that there are a lot more chewing updates at the same ages than here on Spencer's pages. That is because this pup does not chew things up the way his older brother used to. Yes he chews, but he seems to know what to chew on and what not to chew on. He goes for his bones when he wants to chew and I try and keep fresh bones available at all times. Spencer also gets more walks than Bruno did at the same age. Bruno was taken on walks, but since he was living with Allie the Boxer, who had very bad joints, the walks were shorter and more like once a day instead of Spencer's two to three times a day. I think that makes a big difference in the boredom level of the dog.

Spencer picked up a piece of a rug that was on the ground. I asked him to drop it and he spit it out. Good boy, pup!

We were away for the day and inside someone's house. It was raining and the pup was inside. He sat down and let out a little whine. I realized I had not put any water down for him. I filled his bowl and he drank some water. I could tell something was still bothering him. He paced around a little and whined again. I realized I should let him outside. He went out and immediately pooped and then peed. Good boy, Spence. He knew he was not allowed to go to the bathroom inside a house, however he was not sure where he needed to go to get outside. After he went, I let him in and he lay down and went to sleep.