Raising a Puppy: The 29th Week in his New Home—Spencer the Blue-Nose Brindle Pit Bull

A day in the life with Spencer the American Pit Bull Terrier puppy. Spencer's 29th week—38 weeks old, 78 pounds, 22 3/8 inches from the ground to the highest point of the shoulders (the withers). 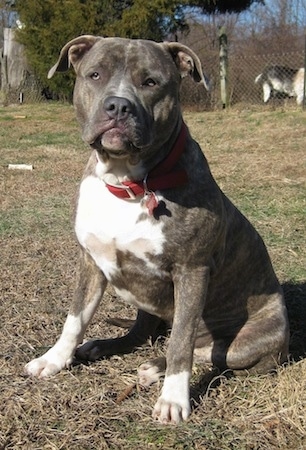 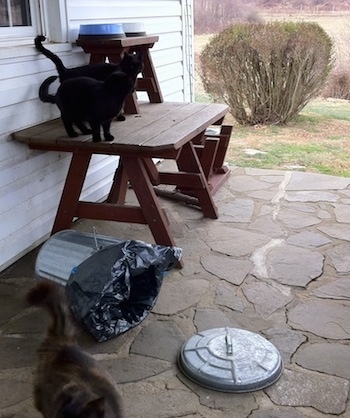 I can't be 100% sure but this looks like the work of a raccoon and not the Spencer-Puppy. It was not windy enough for the metal trash can to have blown over and for the bench to have fallen off the table. For the last several weeks I have had the cat food up higher on the table to prevent Spencer and Bruno from eating it. Since I have done this Spencer has been hungrier for his dog food at mealtime. No more swiping cat food for the Spence. Whatever got to the food the night before ate both bowls, knocked down the trash can and ate food out of there too. Maybe that is what the dogs were barking at that night when they both jumped up and ran to the door. I had thought they were barking at some sled dogs on TV and had told them both to go lie down. 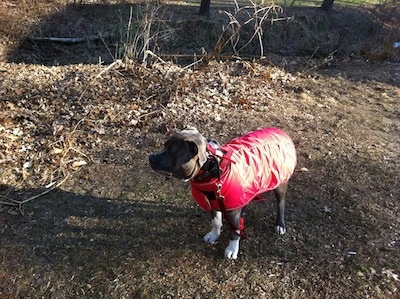 While on a walk I am reluctant to let other owners allow their dogs to pull their way over to say, what the owners call a "hello" if the dogs seem unruly and the owners do not look like they understand their dogs. I don't think it is fair as the leader of my pack to subject them to it. I am usually able to tell which dogs are on the stable side and which dogs are in control of their owner.

For example once on a walk a lady with a tiny Pekingese asked if her dog could say "hello" to my dogs. She asked if my dogs were good with other dogs because her dog just wanted to say "hello." The whole time her little dog was barking, growling and pulling toward my dogs with all his might. My response was, "Yes, my dogs are good with other dogs but I don't think yours is," to which she responded, "He just wants to say ’hi’." That interpretation of the Peke struck me as funny, but at the same time rather sad.

Today, however while Bruno was getting his water therapy and I was walking Spencer we spotted an owner who was walking their Chesapeake Bay Retriever and the dog was actually heeling on the leash. When they saw us coming the owner had their dog sit down. We chatted for a bit and it turns out this dog had just been rescued and the dog was behaving very well already. The owner was in charge, not the dog, and Spencer and this dog smelled one another all over. We see lots of dogs behind windows and fences while we are out walking but we don't see very many actually out being walked—kind of sad considering how many people out there own dogs. 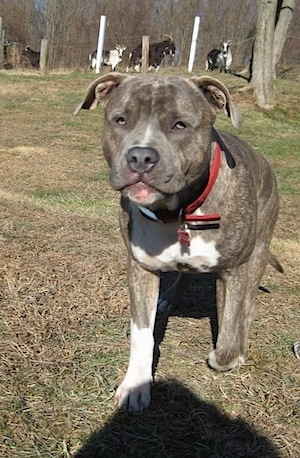 In order to get Spencer to listen I have to be more bullheaded than he is. I have to be the stronger minded one. Because I am able to succeed at this, I can usually stop him from chasing a cat or a goat from a distance, or to not pull on the lead when he spots a squirrel. If he saw himself as more powerful than me he would not see the need to respond to my wishes.

Spencer and the Goats

Here is a clip of Spencer trying to play with the goats. The goats are not into his games. One "Hey" from me stops the chase. That's Sweet-Pea in the beginning and at the end standing her ground. She is the smallest goat but no one messes with her. Just like in the dog world, size means nothing. It's all about who is stronger minded. Unlike humans, animals will not follow weak leaders. 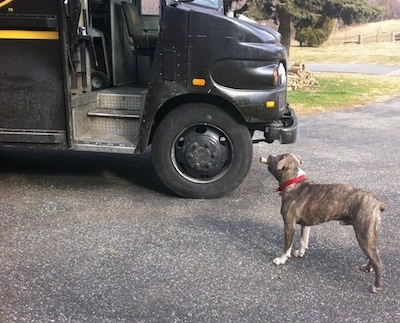 Oh what a happy time for the puppy when the UPS or FedEx truck pulls up. Spencer runs for a bone, ball, stick, anything he can find and happy-dances around the driver with it. This particular day he grabbed a small round log off the wood pile on the porch and stood there waiting for him to get off the truck. 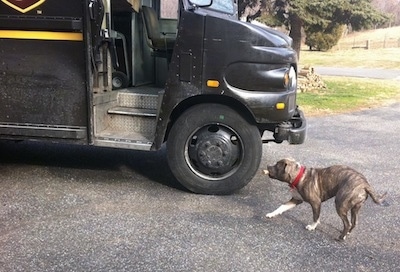 Spence starts to turn in circles when he hears the guy coming. 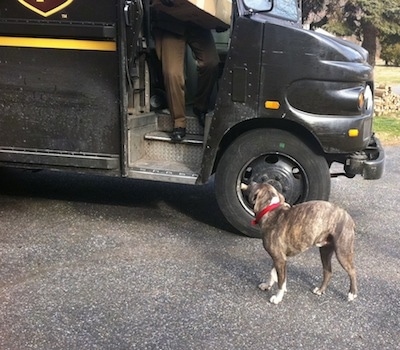 Oh boy, oh boy! Here he comes! The driver plays a little game with him, taking the object from his mouth and giving it back. Spencer is thrilled! 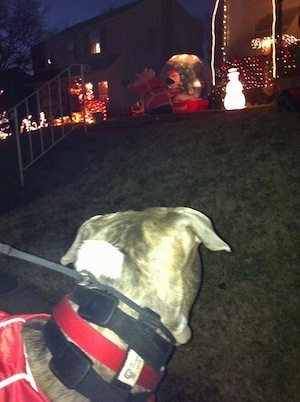 Unlike big brother Bruno who just walks by all of the Christmas lights like they are not even there, Spencer-Puppy is very observant. He always notices new and different things. He watches any moving parts with curiosity. He is also always the first to notice a person, dog or other animal in the distance. He does not bark, pull or make any noises. He just watches very closely. 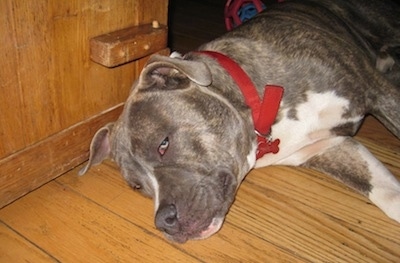 Spencer was exhausted from his hour-and-a-half morning walk, playing outside and not going back to sleep until late afternoon. He lay down to take a nap and very nonchalantly started to slowly chew on the stereo cabinet in a very relaxed manner. "Hey!" Spencer opened his eyes and looked at me. You goofy pup. Don't you dare chew that piece of furniture! Yeah, let’s not get rid of that crate too soon. 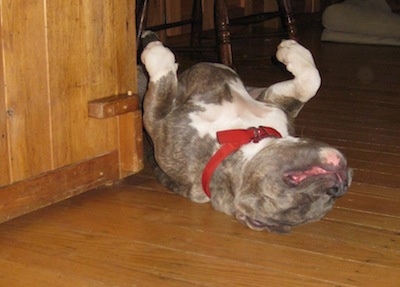 After I reminded him that the cabinet is off limits to chew he rolled over and went to sleep. 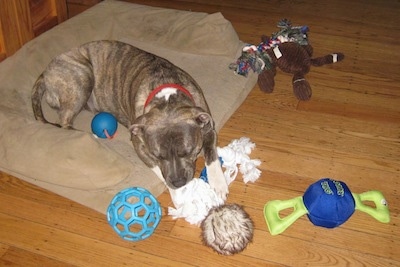 Merry Christmas, Puppy! Spencer loved all of his new toys! Especially that gingerbread man and the rope toy beside it to the top right of the picture. Every time he asked to go outside he had one of those toys in his mouth.