Raising a Puppy: The Third Week in his New Home—Spencer the Blue-Nose Brindle Pit Bull

A day in the life with Spencer the American Pit Bull Terrier puppy. Spencer's third week—12 weeks old, 24 pounds, 14 inches from the ground to the highest point of the shoulders (the withers). 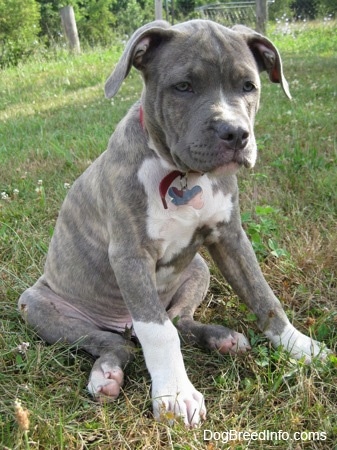 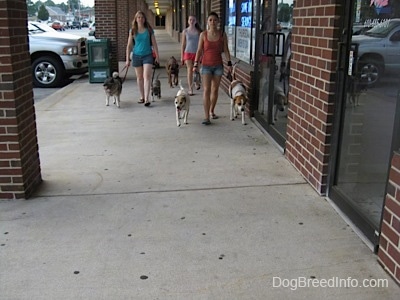 What a difference a couple of days can make. At 11 weeks Spencer could only make it a quarter to half of the way on our walks. He would walk a good part of the way then have to be carried. The pup would get exhausted. This week I decided to bring a wagon to put him in when he conked out, since he is getting so heavy and it's so hot outside. Wouldn't you know it, the one time I bring a wagon the pup is able to walk the entire hour and a half. He walked with more confidence and his manners with the other dogs greatly improved as he didn't try to lick up their mouths or play while on the lead as much as he did before. Spence was full of energy and it was his second walk of the day! After this second walk, however he was exhausted. 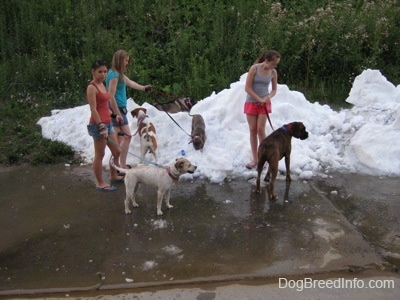 It's over 90 degrees out and we walk to an ice rink to see if they have any "snow" outside from cleaning their rink. Sure enough, they do and the dogs love it! Especially Tia the Norwegian Elkhound! Dogs gain and lose heat through their paws. Walking in the snow really cooled them off.

Spence's crate has still been dry, however he did have one accident in the house and it was my fault for not taking him out to pee. We had just taken him for a car ride. When we got home we all went into the house. I forgot to walk him as I was getting so used to him just not going inside the house. Spence peed on the living room floor. I have to make sure I don't take for granted his great progress. 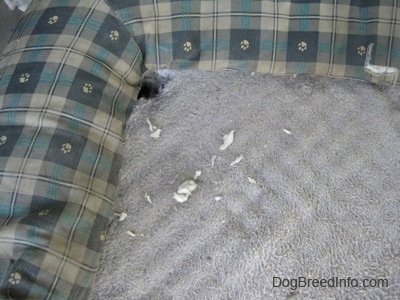 Spence, we do not chew the corners out of the dog beds! 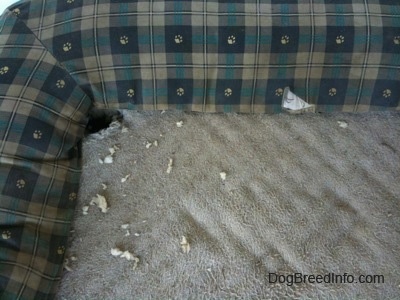 A few days later... Spencer, is it my imagination or is that hole a little bigger? Especially since I had cleaned up all of the bed pieces and now they are back. 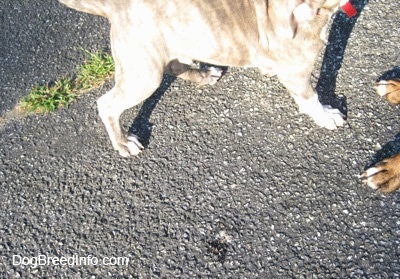 Spence, come here. I need my morning puppy breath sniffs. Hey, what are you licking? Yuck! Bird poop. No, forget it. Spencer-pup don't even try and lick my chin this morning. Go wash your mouth out at the water bowl. 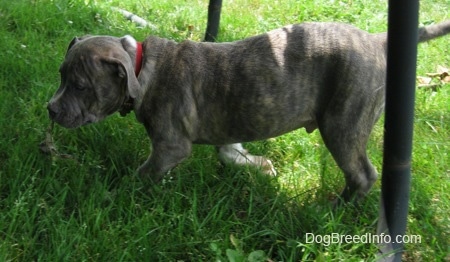 Hey Spence, what did you just find in those bushes. A dead frog! Thank you to all the cats. Spence, drop it! You cannot chew on dead frogs. It just does not seem right. 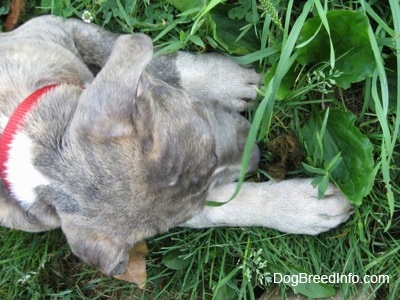 Spence, stop eating that horse poop!!! You are covering up my puppy breaths!!! What is up with you and poop anyway?!!! 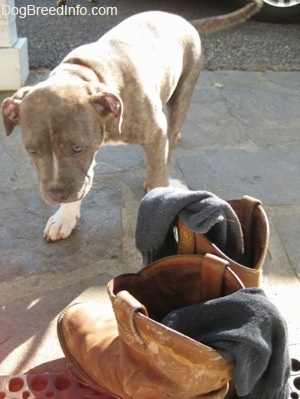 I put my boots out on the porch to get ready for a walk in the woods. That little squirt of a puppy grabbed one of my socks and ran with it! Spence looked so proud of himself for finding the sock. "Hey! Drop it!!" 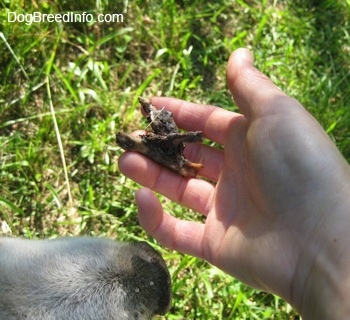 Out on a walk. Spence, what is in your mouth?! Drop that. It's a bone of some kind and boy do I wish I had not decided to smell it! Tundra the Great Pyrenees comes over for a sniff. No, Tundra, you can't have it. YUCK! What's up with you dogs and things that are rotting away? 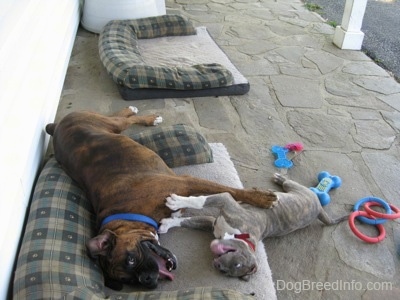 Seems that Bruno and Spencer play more and more every day. 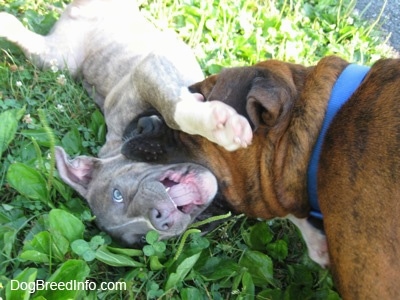 Bruno likes to put Spence’s head in his mouth. 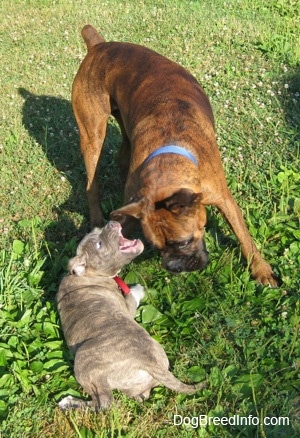 Spence brings out the puppy in Bruno. 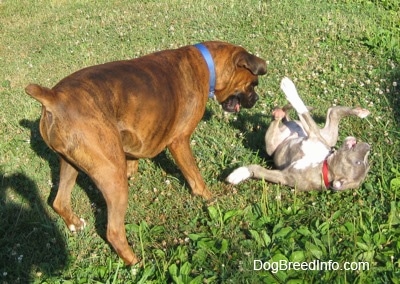 Bruno, I have a feeling Spence is going to give you a run for your money when he gets older.

At 2:00 a.m. Spence yipped in his crate. When I opened his crate he came out and drank water, then followed me outside and peed. When he came in he headed for the dog bed in the living room. I led him to his crate. Spence decided he didn't want to be in there. When I left he yipped. I got one of the dog beds and put it next to his crate and told Bruno to sleep there. When Spence yipped again I corrected him "aattt." After three corrections he settled down and went back to sleep.

On the off-leash walks I always make Bruno heel in the beginning of the walk, next to or behind me until I decide to send him off. It's not always at the same point in the walk when I give him the command to "find it" which means he is allowed to go and use his nose to find whatever might be out there in the woods. Spencer could never keep up with Bruno and on his own was running off a little trying to see what Bruno was up to and when Bruno came back he was falling back in line with the rest of the pack. With Spencer's increased confidence and energy it was now time to guide the pup and teach him "Back" means we are finished hunting around, and "Find it" means you can hunt around. Spence picked up on this quickly. A few times I had to reach down and touch his chest to get him to fall back in line behind me, as opposed to slightly in front, and he responded very well.

Providing structure even on off-leash walks keeps a dog’s mental energy drained as it takes a lot of discipline to stop hunting around and go back to following. We do this on and off several times during the walk, from hunting to heeling, hunting to heeling. They come back not only physically exhausted but mentally too.

If I were to allow Spencer to believe he can make the decisions there just may be ones I, and others around us, do not like. Therefore it is important that he regards himself as the one who follows, not the one who decides. 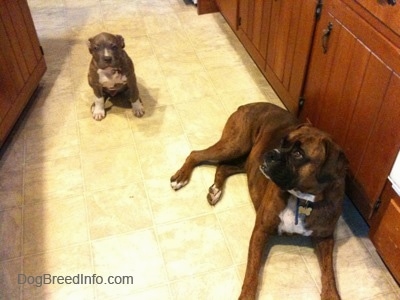 I started preparing Bruno and Spencer's breakfast. Bruno walked into the kitchen and lay down. Spencer then walked into the kitchen and sat down, looking at me. As I was mixing the food I heard Spence whine. Immediately I turned around and said "Shhhh." Spence jumped, startled at the correction. I had told him I didn't agree with him begging while I prepared his breakfast. He sat politely and waited. Followers do not beg from leaders. They wait politely for their turn to eat.

Spencer has been very good at not puppy biting humans. He gets all his puppy bites out on Bruno when they play and Bruno gets all his doggie bites back on Spence.

While out on a walk however we were stopped by a Pit Bull admirer. She started to pet Spence and was playing with his mouth. Spencer opened his mouth and the lady actually put her fingers into Spencer's mouth and Spence started to chew on her hands. She petted him some more and put her hand back into his mouth to allow him to bite her. I had said out loud, "Spence, no puppy bites" to get the hint across to stop putting her hand in his mouth. Thinking about it later I know I need to be more direct and tell the human to not put their hands near his face like that, encouraging him to chew on them. Next time I will be more prepared to handle that type of situation. I had never realized before that people actually encourage puppies to bite on them.

Everything is so New 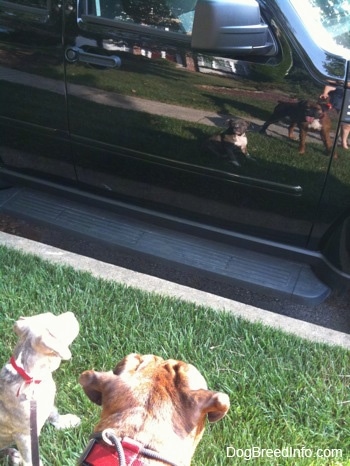 Out on one of our daily walks, Spencer suddenly stops. He had spotted something that he was curious about. I stop and gave him time to soak in that strange thing staring back at him. Spencer stares at it for a long time before he moves on. 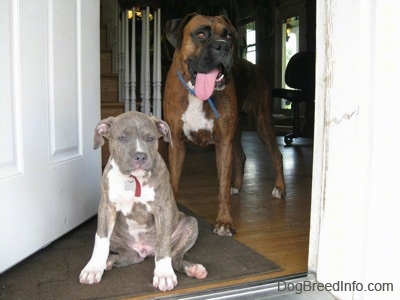 Spencer learns that just because the front door is open, it is not an invitation to go outside. We have been making sure humans go in and out the doorway before him so teaching him not to bolt out the door is relatively easy. He picks up on it very quickly. 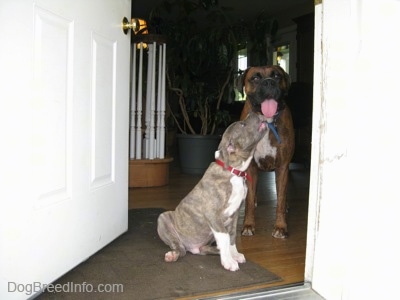 "Hey Bruno, are you hanging your tongue out for me to lick??!!" 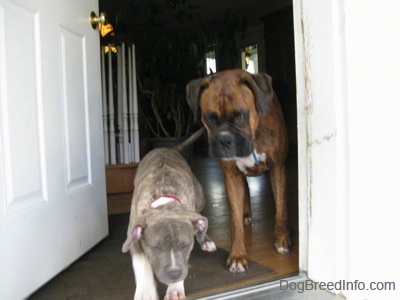 Spencer the Pit Bull learns basic commands from Sara. Paw, sit, come, wait. Sara reports that Spencer is much easier to teach tricks to than Bruno. Seems even at 12 weeks of age he is smarter than his big brother. But no worries Bruno, everyone loves you just the same! When Spence is eating or being fed treats and a human is in contact with his food in some way, that tail tends to be wagging. Want to make Spence wag his tail? Touch his food. I have also never seen a dog chew his food so much. Spence, have you learned to enjoy the taste of your food? 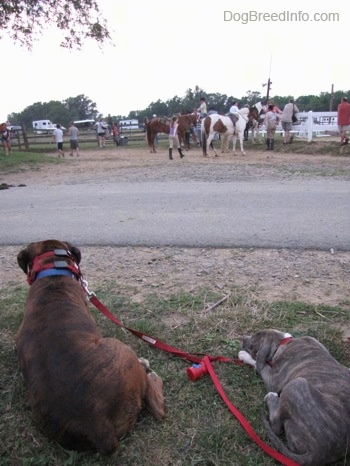 Spencer gets to go to another rodeo for some more people/horse/dog socializing. He did very well, even when a not so well-behaved Jack Russell came walking by. Both Bruno and Spence had stood up when the dog walked by, pulling and barking at them. I told both Bruno and Spencer to sit down and I gave the commands to stay and leave it. Bruno and Spence were tied to a chair with their own leashes connected to one another. I did not have to pick up their leashes for any type of further correction. They simply sat there and watched the dog pass by. 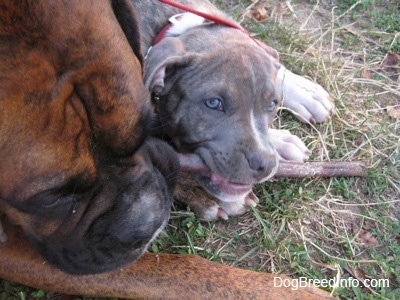 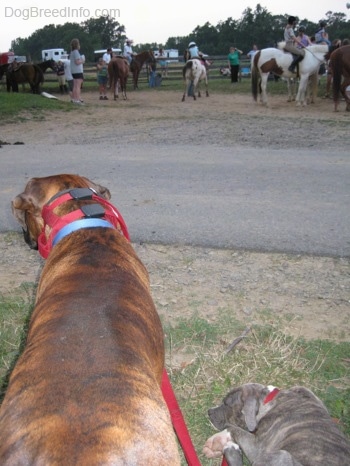 I had to get Spence to drop a few rocks out of his mouth and correct him when he tried to eat more. He was treating the rocks like toys, trying to pounce on them. Later when I thought I had it into his head not to eat rocks I had to stop some kids who decided to feed him rocks. I also had to stop people from putting their hands into his mouth, thinking it was cute how gentle he was with their hands when he chewed on them. I got a few responses how it was not hurting them and had to explain I was training the dog. I also made sure Spence did not climb up on anyone's lap when they sat to pet him. Paws on the ground when you greet people. Again I was told they didn't mind the pup up on them and I explained it was just good dog manners. Spence had kids and adults petting him all night long. By the second half of the rodeo Spencer was wiped out.

Spence has been waking up for the day around 6:30 a.m. every morning, hearing my husband get ready for work. It was the weekend now and I wanted Spence to sleep in longer. He had been at a horse rodeo all night and had been sleeping for the second half of the rodeo. When we arrived home he ate and went back to sleep. We woke him up and took him for a walk in the goat field before we went to bed. It was night and the goats were all settled and didn't follow us. Kung Fu Kitty walked with us and Spence had to be corrected several times for wanting to chase the cat.

Spence woke up in his crate at 4:30 a.m. and I took him out to pee. Outside, every time he passed one of our cats—and there were about ten out there—he looked like he was about to chase them. I body-blocked him each time and he seemed to get the message that chasing cats was a no-no. Spence went back to bed and slept until 9:00 a.m. Good puppy. 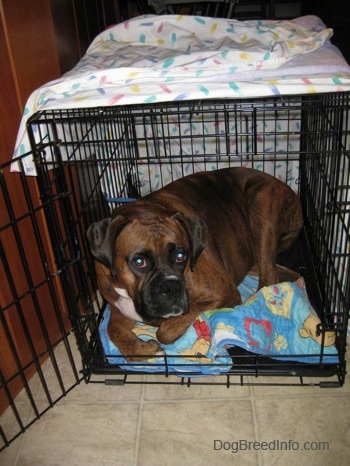 Anyone see Bruno? Bruno, where did you go? Oh there you are. You silly pup. That's not your crate anymore. You're a big boy now and don't need a crate.