Raising a Puppy: The 30th Week in his New Home—Spencer the Blue-Nose Brindle Pit Bull

A day in the life with Spencer the American Pit Bull Terrier puppy. Spencer's 30th week—39 weeks old, 78 pounds, 22 3/8 inches from the ground to the highest point of the shoulders (the withers). 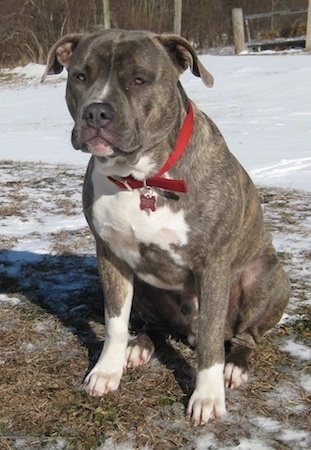 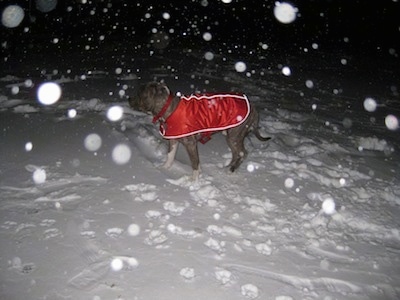 This was technically Spencer's second snow, however the first was just a dusting. This was a storm with high winds and the pup preferred to be inside next to the fire. It was so windy there were a lot of snowdrifts. Some areas were blown down to the grass while others were a foot deep. 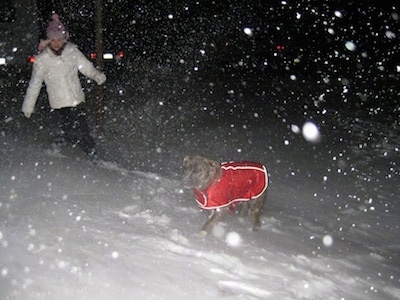 He is not so sure about this. As soon as someone said "Inside" he bee-lined for the door! To get him to go to the bathroom I had to put him on a leash and walk him around until he went. Left to his own devices he went right to the porch. 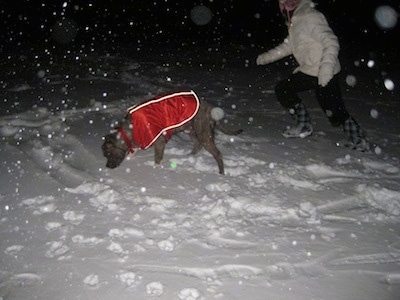 Spencer enjoyed the snow more the next day when the wind died down.

One of the kid’s friends was getting picked up by their parent. Spencer had run over to say hello to the guest as they stood right inside the door. Spence was wiggling around dancing all over as the friend was trying to get their shoes on and their parent stood waiting. Amie realized this was bad manners and sent the pup back. Way back. She made him give a good ten feet of space to the guests. "Back, back, back!" as she pointed towards the direction she wanted him to go. Spencer reluctantly backed up and stood watching. In the dog world space is respect and getting into a stranger’s face as a greeting is pushy, and not very good manners. Imagine if we humans said hello like that—if I were to run over and get into the guest’s face to say hello... By asking him to have manners and respect keeps him in control and it also keeps him happy, as he knows exactly what he is supposed to do and who makes the calls.

Spencer does not let a little snow stop him from hunting around. I saw some deer prints in the snow at one point and believe that is what he was tracking, but only he knows what he truly smells. He is able to gather a lot of information by smelling and I am sure it has told him a long story. He most likely also knows how long the animal passed by going by the strength of the scent. 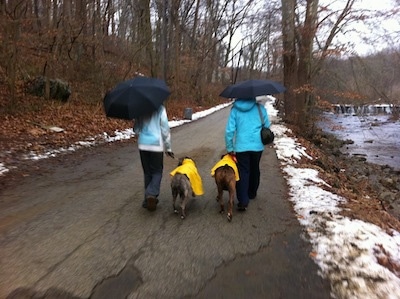 Spencer and Bruno go for a long five-mile walk. The first mile was all up a steep hill. The next four miles had a few small hills to climb but were mostly level or downhill. The pup did great passing other dogs, people on foot and on bikes. 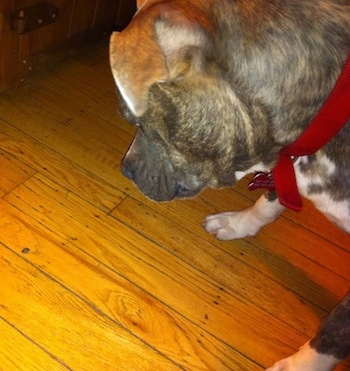 Spence, what are you pawing at? Oh great, a stink bug! Leave that alone or you will make it put out its stink and that will attract other stink bugs to come. Let’s put that bug outside. 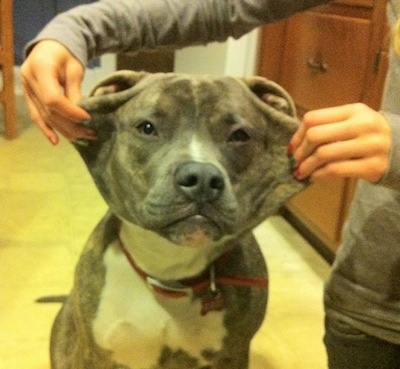 Hmmmm, does all this extra skin mean his head is still growing? 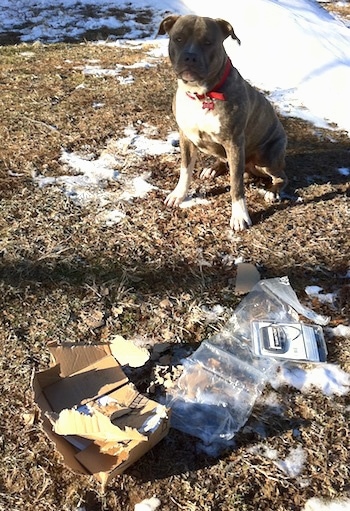 Oh what a bad puppy you have been. Look, I know you really like the UPS guy, but what he brings is NOT for you. Just because you are outside when he drops off packages does not mean those are presents just for you to chew up. That package was for daddy and he is not going to be a happy camper! I am going to have to try and catch you touching a package to make you understand.