Raising a Puppy: The 31st Week in his New Home—Spencer the Blue-Nose Brindle Pit Bull

A day in the life with Spencer the American Pit Bull Terrier puppy. Spencer's 31st week—40 weeks old, 79 pounds, 22 1/2 inches from the ground to the highest point of the shoulders (the withers). 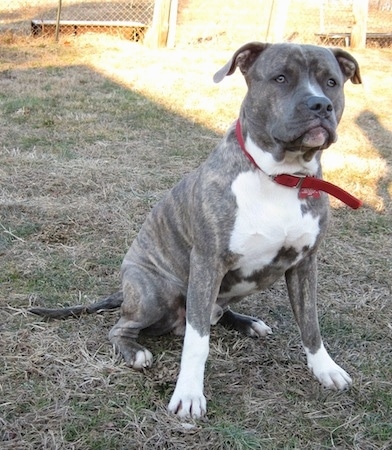 Spencer learns how to use the Yuppy Puppy Treat Machine. When he paws the lever down food comes out of the dispenser. 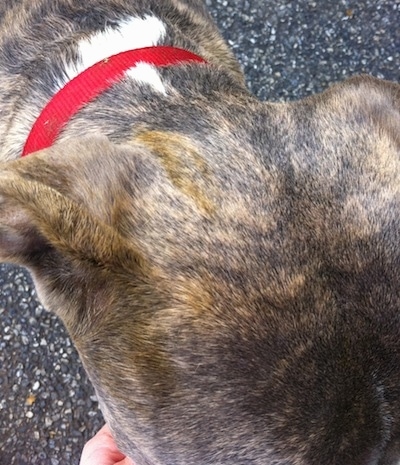 Oh yuck, Spence! I really need to start inspecting your head before I give you a kiss. You smell like horse poop. Bright side? Is there always a bright side? Hmmmm, you’re most likely boosting my immune system on a daily basis. Now hold still while I wipe this stuff off your head. Rolling in poop is one instinct I would be happy for you to lose. 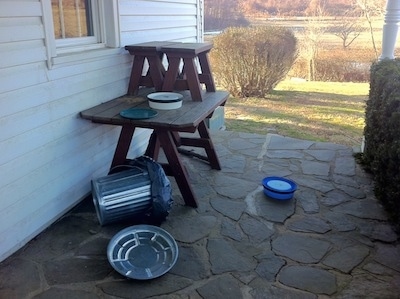 Assuming this is indeed the work of a raccoon... Spence, I can understand that being in a crate at night would prevent you from letting me know there's an animal outside raiding the cat food. But Bruno, your dog bed is right next to the door that is up against that side of the house. What do you have, some kind of pact with the raccoons? An alert would be nice, buddy.

I heard the UPS driver pull up and I knew the pup was outside so I looked out the window. I saw the driver happily petting Spencer. Spence was twisting in a circle with this head low loving it up. When the driver set the package down the pup happily started chewing on the box. Oh boy, the pup thinks the driver is bringing him toys! I walked out the door, "Hey! Don't chew that box!" I explained to the driver that the pup had taken a couple of boxes and chewed them up in the past. He laughed and said we needed some kind of shelf just for the packages out here. 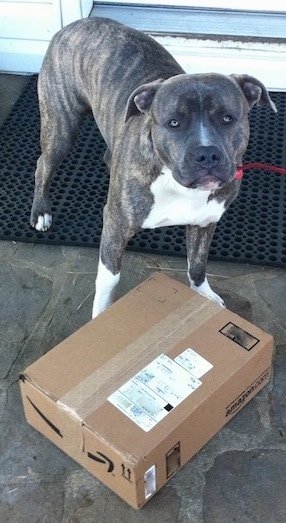 After the driver left I set the package on the ground and sure enough the pup came over and started to chew on it. I reacted with a "Hey NO!" Spencer looked up at me. He had no clue he was not allowed to chew on the package. 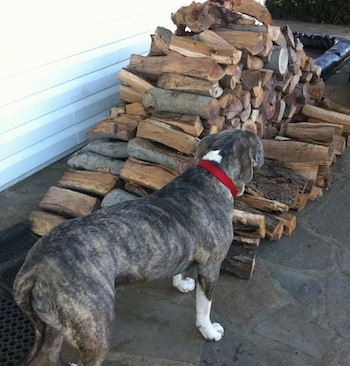 Spence turned to the wood pile and started to chew on a log instead. "No!" Spence walked away to the other end of the porch. 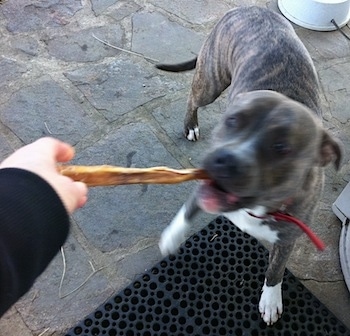 I went inside and got him something he was allowed to chew on. "Here you go, buddy. Chew on this instead." Spence happily walked off with this bully stick. Fifteen minutes later Spence came inside the house, no bully stick in sight. Darn pup must have buried it out there somewhere! Don't you ever bury one of my packages, you hear me, squirt?!

Barking at the Unknown 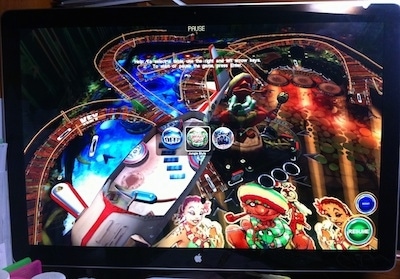 I had just downloaded a pinball game on my computer and was trying it out for the first time. I have a large screen and the graphics on this game were good with neat sounds. The screen was moving with the ball, something I was trying to get used to looking at. There was a big gorilla appearing and then going away depending on where the ball went. From behind, Spencer walked up and started to growl and let out a few barks at my screen. I have to admit it was gosh darn funny—the way his ears were perked and the way he was looking at the screen like it was going to jump out and get him any minute. I felt like calling the kids to look at him. OK, well I did call Sara but luckily she didn't hear me...then I came to my senses. I didn't want a dog that growled and barked at my computer and my laughing was like saying "Good Boy." I had to pull it together. "No," I said. He had backed up, but obviously I was not convincing him. He stepped forward again and growled at the graphics when I had started playing again. I had to convince myself to get serious. I could be creating an issue right at that very moment. "No. Leave it!" 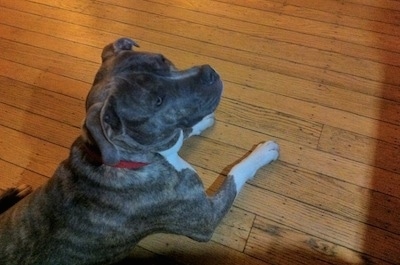 Spence lay down which was a good sign but he was still staring at the screen which was not a good sign. He let out a growl. "Leave it." Every time I heard him whine I said, "Shhhhh!" It took a few times telling him before he believed me. I had to get myself in serious mode. He knows how I am feeling; I can't hide it. After a bit he went to his dog bed. He was still in a restless mood, though. At this time of night he should have been sleeping. He had just gone on an hour-and-a-half walk not too long before this, but the game worked him up a bit. I decided to distract him. I went and got him a bully stick and handed it to him while he was lying in his bed. He wagged his tail and started to chew on it. I played another game of pinball so he could hear it in the background. Then the pup got up and stood at the door asking to go out, bully stick in his mouth. I let him outside. I am sure he went out to bury it in the yard somewhere. Makes me wonder how many bones he has hidden out there! Ten minutes later I let the pup in. No bully stick in sight. I wonder if he ever digs them up to chew on them or if he is saving them all for that day when he is starving hungry and his pack has no food to eat; that day that has never come. 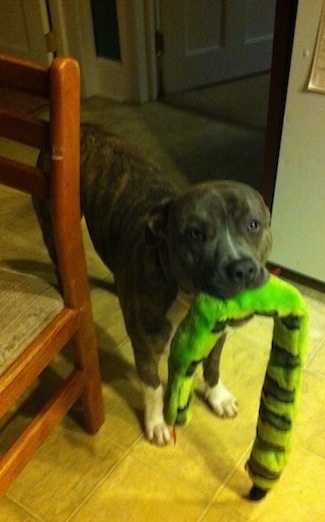 Whenever the pup senses we are getting ready to go outside he finds a toy to take with him. Today it was Mr. Snake. He picks the toy up in his mouth and stands there calmly waiting. He ends up leaving toys all over the yard, which I am always bringing back in. This particular day Spence carried the snake around for a while, then dropped it to go do his business. I picked it up and tossed it for him and he played with it some more. I would stomp my feet and he would play bow and run with it. We practiced playing with the snake and ending the play by asking him to give it back to me. Later Spence had gone back outside with his snake by himself. When he came to the door to be let in he didn't have the snake in his mouth as he came through the door. "Spence, you forgot your snake." The pup actually turned around, went back out on the porch, grabbed his snake and brought it inside the house. He carried it to his dog bed. Now if you would learn to bring ALL of your toys inside the house like that, your mommy would have a lot less picking up to do.

When playing with Spencer I know it is important to always be the one to start and end the play. Starting the play with the pup is easy. He loves to play. Just stomp your feet at him and he will take the bait. He play-bows and runs around the yard. In this clip he is playing with Mr. Snake. When I decide I want to go back inside the house I need to tell the pup we are done. I want to bring the snake inside so it does not get covered with snow. I have to be very convincing in order for him to take me seriously. Spencer is smart and intelligent dogs tend to feel a greater need to take over if they don't have anyone stronger minded than they are to tell them otherwise. I can clearly see that if the entire family didn't have a willful streak of their own, this bullheaded Pit would be ruling the roost.