Raising a Puppy: The 35th Week in his New Home—Spencer the Blue-Nose Brindle Pit Bull

A day in the life with Spencer the American Pit Bull Terrier puppy. Spencer's 35th week—44 weeks old, 80 pounds, 22 1/2 inches from the ground to the highest point of the shoulders (the withers). 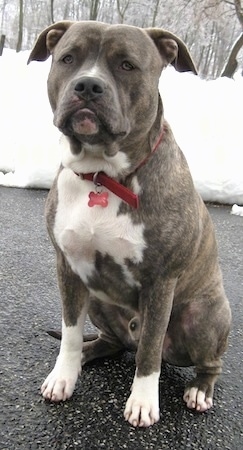 Weaning off the Crate

We have been leaving Spencer out of his crate during the night and when we leave during the day. So far, so good! The pup is exercised daily with pack walks to drain his excess energy and in return he is calm and relaxed inside the house.

Spencer is not being very respectful of Sylvester the cat. In the dog world, space is respect and Spencer is nosing at the cat and being a little too pushy. Sylvester the cat is mentally challenged (for real, not a joke) so Spencer is zoning in on his weakness. Sara sticks up for the cat and asks Spencer to respect the cat. Some of our stronger-minded cats Spencer would not dream of being pushy with. The pup feels the energy coming from the cat and knows he is not the sharpest tool in the shed and he is taking advantage of it. I can only imagine if we humans were not very strong minded how the pup would push us around just like he is trying to push the cat around. 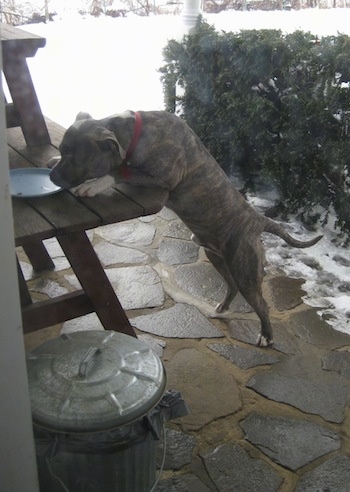 I knew it! I knew that pup was stealing the wet cat food off of the plate that I was putting out. He was just spending too much time over on that side of the porch. I once had smelled his breath and really thought I smelled cat food on it. The dry food is kept up high on the benches on top of the table and that has been working to keep the dogs from getting it, but I have been giving the cats some grain-free canned cat food and Spencer has been helping himself!

I had an opportunity to work more with Spencer and the "scary" see-through steps. It occurred to me as I was working with him that had Spencer been adopted by another owner he would have been prone to becoming a fearful dog. The pup is super smart. He does not miss a trick. He is always smelling, watching and listening. He yawns a lot which means he is either thinking, trying to work something out in his head or unsure. I believe it is a little of each. He is super cautious of new situations. He stares at new objects as if he is trying to figure them out.

For example, on one of our recent walks he spotted a couple of balloons tied to a mailbox. He perked up and he kept walking and heeling on the leash, but his eyes were fixed on those balloons. As we got closer he side-stepped as if he needed to give whatever the heck that was some space. His eyes never left the balloons. I walked him right up to the mailbox and let him smell the balloons. He was then satisfied and we walked on. He had looked so cute when he was fixed on the object he was unsure of. However, had I reached down to pet him, smile, laugh or talked sweet to him (which I had the urge to do when I say he looked cute—I mean he was adorable) but that would have been the entirely wrong moment to pet him or give him any type of affection as it would have been saying to him, "Good boy for being unsure about that strange thing up there." Instead in my head I tried to stay focused and strong.

The mistake people make with dogs is when the dog is scared they cuddle and pet it, trying to tell the dog in a human way that everything is OK. The problem is dogs do not think like that. When a dog is unsure or afraid and you give it affection you are saying to the dog "good dog for feeling how you feel at this moment" and that makes the dog even more afraid. What a dog needs when it is afraid is a being who is stronger minded than itself so they can feed off of how that person is feeling. Dogs see pity as a weakness and when they themselves are feeling weak and everyone else around them starts going weak on them it freaks them out. Humans often use human psychology on a dog instead of "dog psychology” and in return they create issues of all sorts. 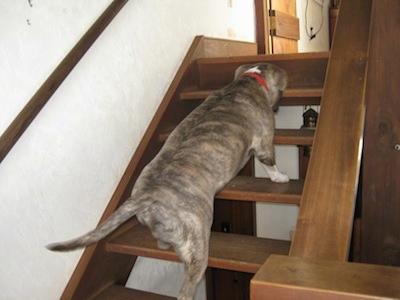 It did not take much this time to get Spencer to go up the steps. At the bottom of the steps I took him by the collar and said in my mama bear tone, "come on...!" At first he didn't want to go, and I pulled him to the first step. This time Spencer started off up the steps after being led to only the first step; off he went. I let go of his collar because I could tell he was going to do it on his own. When he got to the top of the steps he wagged his tail and turned around to smell me. I was not exactly sure how he was feeling; a wagging tail is not always a sign of happiness so I played it safe and didn't pet or talk to him. 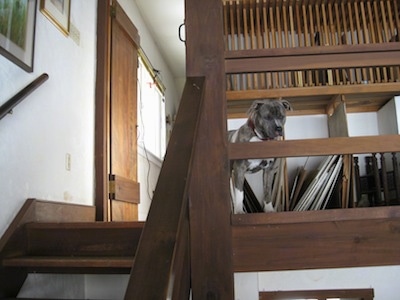 Now Spencer was at the top and was looking down. I called him. No go, he was not going to come down with just a voice command. I walked over to him and pointed down at my feet. "Come!" Spencer walked over to me and I took him by the collar. Once again in my "I mean it” mamma bear tone I said, "Come on." 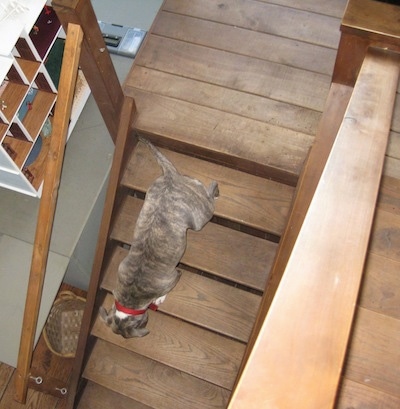 I didn't even have to pull on his collar. He started off down the steps on his own so I let go. 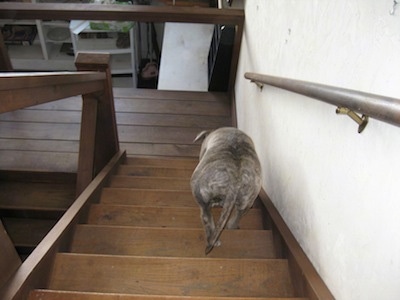 We practiced going up and down two times. The third time I had gone upstairs I had not told him to come with me. I was upstairs in one of the rooms when I realized Spencer had walked into the room and was looking at me. That meant that he came up the steps on his own without me even asking him to! I could not help but smile at him as he looked at me. I was proud that he did it on his own. 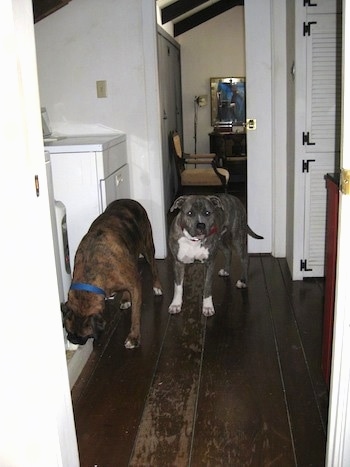 Spencer had not spent much time upstairs up until this point. At this particular house there is a bathroom sandwiched between two bedrooms. The doors on each side of the bathroom had been closed and I was going over into the next room. I had opened up the door leading to the bathroom and stepped into the room. Bruno followed me, no problem. Spencer looked cautiously around. He didn't know what was inside that room and he was not about to just walk in without knowing. He poked his head inside the entranceway and looked left then he looked right. I decided to open up the door on the other side leading to the other bedroom so he could see the entire path and how it connected. Then I said in that same mamma bear tone, "Come on." Spencer listened and followed me. Once he walked through the tunnel-like walkway and saw how it connected he was just fine about the whole thing.

It is funny spending time with Bruno and watching him not even think for a second about things, then watching Spencer and how cautious he always is about new things. I believe that the reason Spencer is more cautious has something to do with him not only being smarter, but having stronger instincts than Bruno. Spencer seems to never miss a trick and he is very sensitive to how those around him feel. I think Spencer's senses are much greater all around than Bruno’s. That and the fact that Spencer has always seemed to be a tad insecure about new situations. He is turning out to be a very stable minded, well-rounded dog because he lives with a pack of humans that know how to react to him. I think he was meant to be here with us. 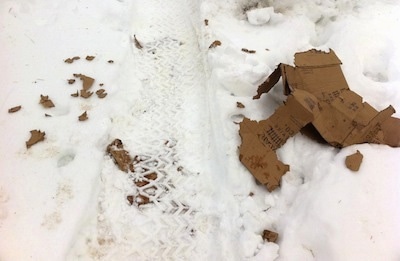 Oh, you little squirt! I knew I should not have left that empty box on the porch. You seem to have a thing for cardboard that is left outside and with all this snow, sleet and freezing rain our walks have been shorter. Might be time to toss your little tush on the treadmill! Funny thing is Spencer does not chew cardboard inside the house (knock on wood). He seems to leave things alone when they are inside the house. But when he is outside he seems to think the objects are fair game.