Raising a Puppy: The 38th Week in his New Home—Spencer the Blue-Nose Brindle Pit Bull

A day in the life with Spencer the American Pit Bull Terrier puppy. Spencer's 38th week—47 weeks old, 80 pounds, 22 1/2 inches from the ground to the highest point of the shoulders (the withers). 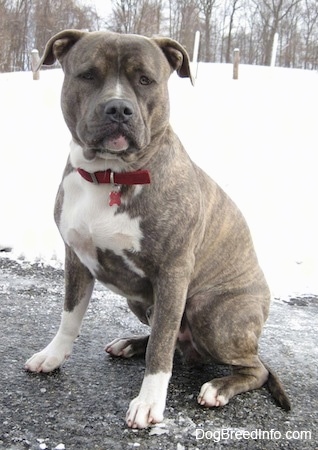 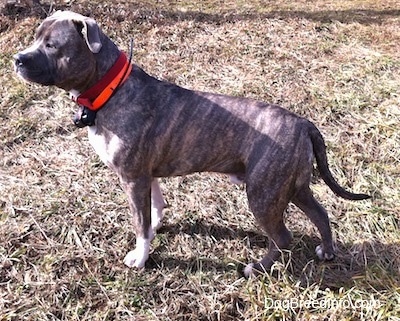 Since Spencer spends a lot of time off leash in the open woods and fields we decided to purchase a Garmin Dog Tracking Transmitter collar. This way when he runs out of sight we can see if he is moving further away, stopped or coming back to us. We have used it a few times and it works great. 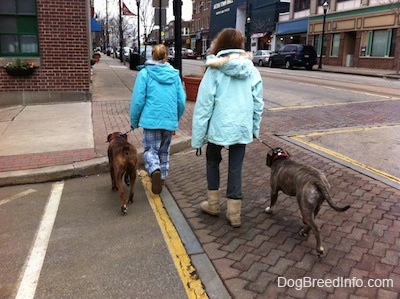 We have taken Spencer into many pet supply stores, but this time we happened to be walking past a pet store that also had animals so we walked in. 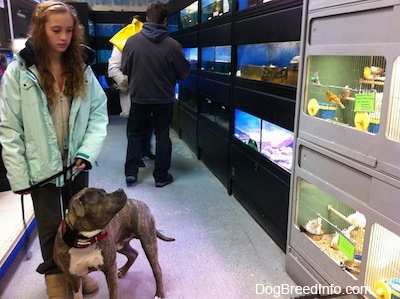 Notice his tail: it’s down and relaxed so he was still in a submissive state even with the tempting small animals around. He is looking, like he likes to look at everything else. It was good practice for the pup. We asked him not to react to all of the birds, rodents, fish and puppies. It was a difficult task and while he did well his back legs started to shake when he spotted the cage of rats. 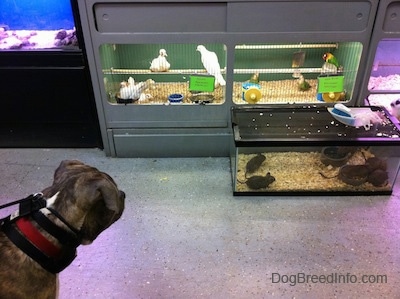 He wanted something really bad but had to hold back and the shaking was how he released that energy. It took a lot of will power on his part as his instincts were telling him to go after the cage full of rats that was sitting on the floor right in front of him. Sara had the leash and gave him a corrective tug when he focused in on an animal. He did very well. His tail stayed down. The fact that we walked for 40 minutes before coming across and going into the pet store helped Spencer a great deal in tapping into his will power. 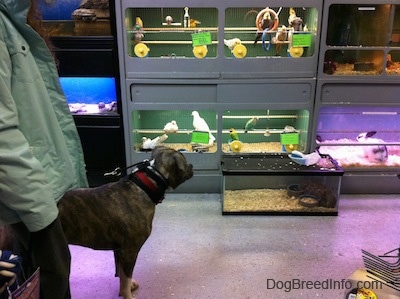 I didn't notice this until later when I was looking at the pictures I took, but look at the first picture of the rats in the cage and now look at this one. Notice how the rats moved to one corner of the cage and huddled there. How did the rats know they better hide? There were people everywhere that did not bother them. Spencer had not been making any noise and we did not allow him to come any closer to that cage. He never touched the cage. He never pulled toward the cage. He just stood there looking. Somehow they knew there was a potential threat close by. They sensed Spencer. Animals have a sense that allows them to feel emotions, the energy coming from another being. It is because of this sense that all animals possess that we humans must stay mentally strong for our dogs. Dogs will not listen to a being that they feel is weak. You can possibly hide how you feel from a human, as most humans have let this ability fall dormant, but you will never be able to hide how you feel from a dog. It will know because it will feel it. This also explains why some people are more prone to getting bitten by a dog; the dog senses a fear in them and interprets them as a weak being. Others who are stronger minded, more confident and are naturally calm have dogs that not only listen to them better, but have less of a chance of getting bitten by strange dogs they come across. Dogs really help us in this way, as they force us to take a look at ourselves and dig down into our souls for strength. 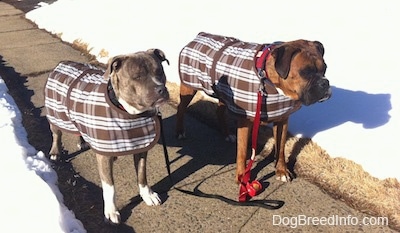 I was out walking Bruno and Spencer and spotted two Golden Retrievers on a retractable leash walking their owner up ahead. We were across the street. I kept walking, waiting for the Goldens to see us. Bruno and Spencer saw the dogs a ways back and were just looking as they walked. When the Goldens saw us they started to pull and bark. The owner told them to cut it out but the dogs ignored him. The dogs were already in charge of their human by leading the way on the walk; there was no reason to listen to their follower. Bruno and Spencer kept walking. Spencer looked as he walked but never pulled or stopped. Bruno had turned his gaze back to the path ahead, stopped looking and kept walking. I gave the pup a couple of "leave it" commands and he too stopped looking and kept walking.

So what was the difference in the two packs and their reactions?

In the Goldens’ pack one of the Goldens was in charge and that dog reacted so the other dog reacted and neither dog thought it necessary to listen to their human follower. 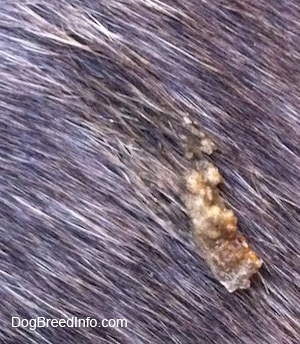 I had looked down and saw something on the pup’s back. I thought it was a leaf so I went to pick it off. Oh darn! As I touched it I quickly realized it was bird poop! You poor puppy and my poor hand! Come here so I can clean that off you with a paper towel.

Checking out the Horse 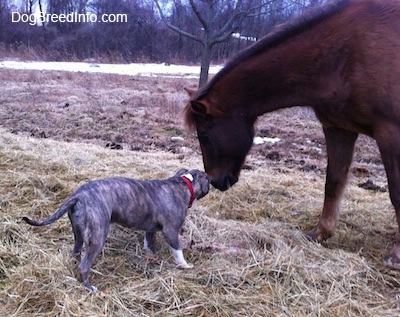 Spencer had walked over and was smelling Amie's horse Scooter. Scoot the horse obviously didn't feel threatened as he bent his head down and touched noses with Spencer. 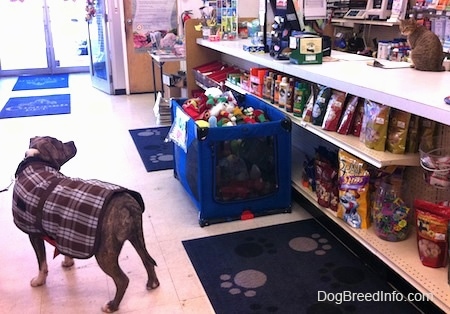 One of the pet supply stores we frequently visit often has rescue cats roaming around the store that are up for adoption. Spencer had just spotted the cat looking at him from up on the counter and was giving the cat one of his famous "looks" where he just stares at them but does not react. It's not an intense stare, he is simply just looking. Notice his tail. It's very relaxed and held down. He has no other intention but to just look. When it was time to leave, we just started walking and he turned away from the cat and followed. This is what he does when we walk and another dog barks at him; he just looks at them. I have a hard time getting the look on camera when I am walking and he spots another dog because the correct thing for me to do as the handler when a dog is barking at us is to keep walking to show Spencer that I want him to just keep walking. Getting out the camera is difficult during those times. I will have to keep in mind to try and get a shot sometime of him looking while we are being barked at. 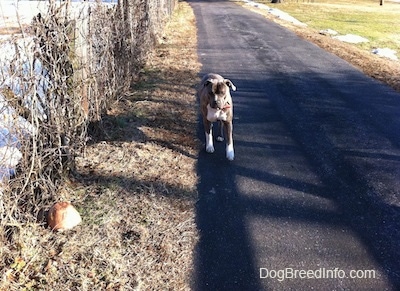 Spencer had gotten into a bad habit of trotting up the driveway toward a busy road. One of his doggie friends, Tia the Norwegian Elkhound, lives across the street and he would often hear her outside. While our driveway is a tenth of a mile long sometimes he would get pretty far up before we spotted him. He would always come back when we called but I was worried we would not notice him gone in time one of these days and he would make it all the way to the road. We put an invisible fence just across the driveway to keep the pup from wandering up and getting hit by a car. This was his reaction to one of the first times he realized walking past the gate was not a good idea. I was careful not to call him to the barrier and to let him see on his own. I didn't want him to associate me telling him to move into something uncomfortable. It worked; he stopped casually going up the driveway. It's not one of the normal invisible fences; it’s a couple of fake looking rocks that send out a signal—a sound and three seconds later it starts to vibrate. I tested it on myself and it feels like when you stick your tongue to a 9-volt battery. It's just enough to keep him from wanting to go past there. I am hoping that after a while he will get out of the habit of taking a stroll up the driveway and we won't have to put the collar on him anymore.