Raising a Puppy: The 39th Week in his New Home—Spencer the Blue-Nose Brindle Pit Bull

A day in the life with Spencer the American Pit Bull Terrier puppy. Spencer's 39th week—48 weeks old, 80 pounds, 22 1/2 inches from the ground to the highest point of the shoulders (the withers). 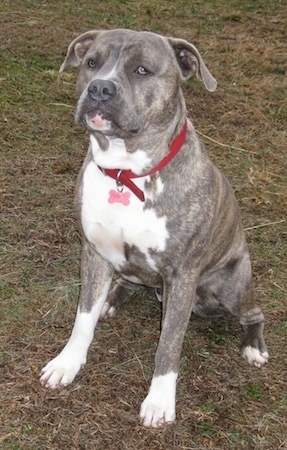 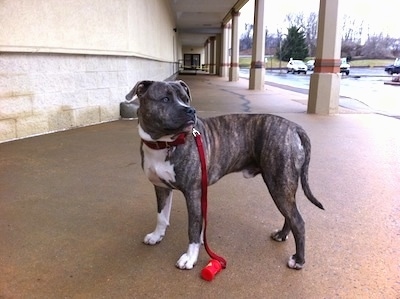 While out on one of our walks we visited a dog-friendly pet store. This was the first time we had been there. The owners have a little Yorkie that has free roam of the store. As we entered one of the owners swooped the Yorkie up in their arms. The Yorkie spotted Spencer and began to have a true hissy fit. The dog’s legs were pumping like it wanted to run as it stared Spencer down, barking and growling. While all this was going on the owner, who was holding the dog, massaged it in the chest saying in soothing human words, "I know you just want to say hi. It's OK. It's OK."

Spencer was quietly and calmly staring at the dog. I left the scene and headed to the back of the store with Spencer to do our shopping. As I did, I heard the owner remove the dog, which was still barking madly and growling, from the store.

As we checked out the remaining worker gave Spencer a treat as he quietly stood there while I paid. After Spencer’s treat he lay down and waited for me to finish. The lady behind the checkout counter made a comment about how well behaved Spencer was.

We walked out of the store and started walking up the shopping center sidewalk. Up in front of us was the Yorkie, who was trying to drag its owner toward us on their way back. The dog was barking, growling and digging its feet into the pavement with all its might, heading toward Spencer. Once again Spencer was just looking. As we passed the owner stated to me, "You know he really does just want to say hi" as she started allowing her dog, who was still carrying on to pull in Spencer's direction.

I responded as politely as I could, "With the way he is growling I'm not so sure that is all he wants." The dogs were about five feet apart at that point and I really did not want the owner allowing her dog, which was still pulling, barking and growling, to approach Spencer head on. That really is not fair to the pup to put dominant dogs in his face. I, as the pack leader, have the job to control the situation and not give Spencer any reason to think he has to take matters into his own hands. Spencer must have trusted I could handle the situation because he just looked at the dog that was still carrying on.

I had continued to walk as we passed and the owner got the hint and pulled her dog back away from Spencer. The dog barked and growled until it was out of sight and back in the store.

What I thought about as I left the area is, what if it were the other way around? What if my large 80-pound Pit Bull were the one barking, growling and digging his paws into the ground trying to get at the Yorkie? Because inside the dog’s mind there is no difference: Small Dog Syndrome

I must admit I am rather enjoying the fact that Spencer has a tail that is not docked. There was Spike the Bulldog, Allie the Boxer and Bruno the Boxer, all with little stubs of a tail. Spike’s short stub was natural and Allie and Bruno had their tails docked by the breeder at birth. It is something I myself would not have done. 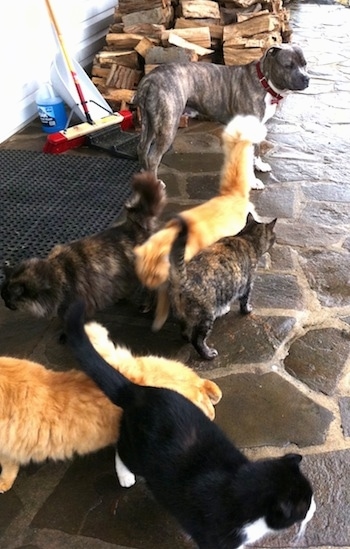 What I am having fun with is reading what Spencer is saying by watching his tail. For example, the other day I opened the door to let him outside and a few of our cats were on the porch. 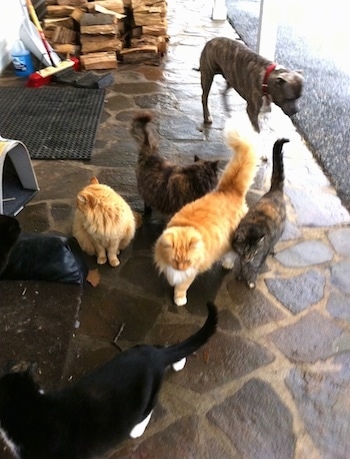 As Spencer stepped outside he saw the cats. I watched his tail go from down and relaxed to a few notches higher than middle-road and stiff. His ears perked forward and his shoulders puffed out a bit. He looked cute but I knew what it really meant. He was up to no good; a chase was on his mind. I immediately gave a verbal correction, "rrrrrrr" I growled at him. I said, in his language, I don't agree with that, pup!! Spencer understood exactly what I said. I watched his tail move back down to his normal low relaxed position. Spencer turned and gave me a quick glance then he lowered his head and did a half-turn, making his body into the letter "U" and wagged his tail a few times. Spencer had just told me, OK fine, I'll stop. He looked so happy about it too. I closed the door and he walked off to do his business. I get great pleasure out of talking to him. He obviously likes talking to me too.

Spencer was trotting back toward the house when he spotted a cat under the car. It was Oreo, the cat he used to chase all of the time. His tail went up and his body perked. He focused in on the cat and moved toward it. He was up to no good again. "Leave it!" I called to him. But it was as if I had not spoken. "Leave it!" Again, no response from him. Then I said, "grrrrrrr";I growled at him and immediately, and I do mean immediately, he backed off. His tail lowered, he gave me a very quick glance and he veered away from the path of the cat. I really think that he did not hear my "leave it" command, and if he did hear it the meaning behind it did not register in his brain. He knows what "leave it" means, however those are human words that were taught to him. His brain was focused on the cat so he was not concentrating on human words. But when I growled he instinctually knew exactly what that meant without having to think about it. Even though I growl all the time as a correction and know that he responds to it very well I was pretty amazed at the difference in his response to my "leave it" command compared to speaking his own language. When you speak dog rather than speaking the human you taught the dog, you get much better results out of the dog. I think that a large percentage of the time when a dog does not listen to the human, the dog truly does not know what the human wants.

Spencer and Sandy the Cat

Spencer tries to play with Sandy the cat. Spencer soon decides he would rather not have a scratch in the nose and leaves. Notice Spencer's tail. It's up halfway, representing an excited mood. Had it been all the way up over his back that would have indicated that he was being dominant. However Spencer was being playful; notice the few play bows that Spencer did toward the cat. The cat didn't feel like playing, though. Sandy often rubs all over Spencer. The two of them are friends. I have never seen Sandy back away from the pup. The cat always stands his ground. 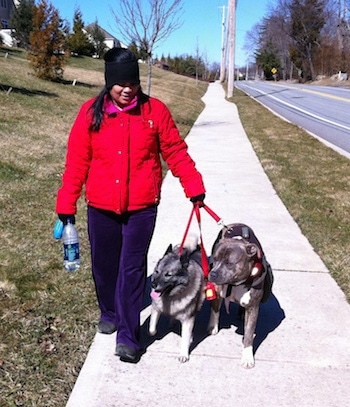 Spencer and Tia out on a walk together. They seem to really enjoy one another’s company. 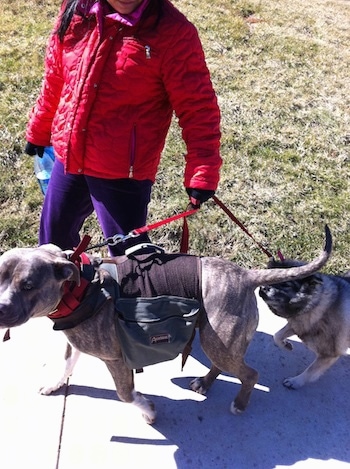 Tia suddenly decided that she wanted to know what Spencer had for dinner the night before. That sounds funny to some and just wrong to others but truth is, when humans want to know something about another human they ask them. "Hey where were you all day, what did you eat for dinner last night and breakfast this morning?" When a dog wants to know something about another dog they smell it. That is how they get to know one another and they gather all sorts of interesting information through their noses.