Raising a Puppy: The 41st Week in his New Home—Spencer the Blue-Nose Brindle Pit Bull

A day in the life with Spencer the American Pit Bull Terrier puppy. Spencer's 41st week—50 weeks old, 80 pounds, 22 1/2 inches from the ground to the highest point of the shoulders (the withers). 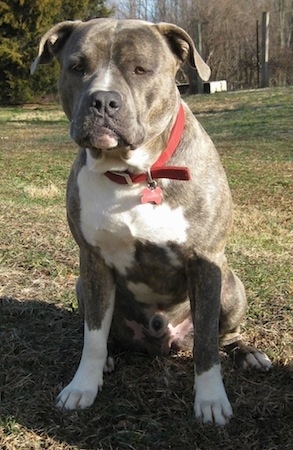 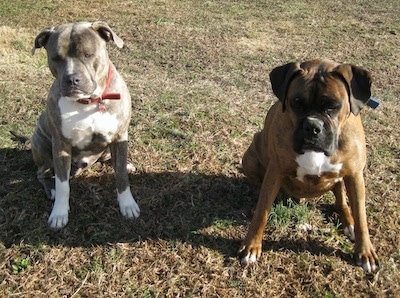 Spencer with his big Brother Bruno the Boxer.

Presenting a Present to the Pack 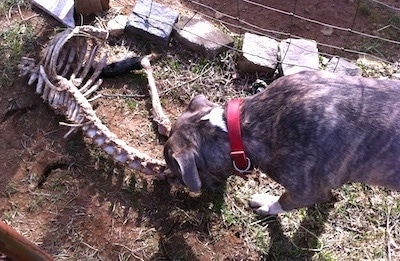 Bruno had an acupuncture appointment. While I don't feel Bruno is ready for a long walk I did take him down a short path in the woods so he could not only do his business but drain a little energy to help him be calm at his appointment. On my way back to the house Spencer had disappeared into the woods. I called him but did not see him coming back. Knowing he was in a safe area I decided to take Bruno back to the house and come back to take Spencer for a longer walk. I had expected to have to walk in the woods somewhat to where I had last seen him head, however when I got back to the top of the path there Spencer was with a present for me. He dragged this animal carcass all the way out of the woods, up the path and had attempted to bring it through the gate most likely on his way to the house, where it got stuck on the fence. When I had been calling the pup he apparently was coming, just slowly, as he was dragging his prize. I had only been gone for about two minutes. Nice, pup. Good job hunting today, but you can't keep that either.

We have made great progress with Spencer's ability to ignore things like skateboards. After working with him, now at 11 1/2-months-old he walks like a pro, heeling past all types of distractions. There was a teen in the skate park practicing. Spencer kept walking and did not pull. In the second part of the clip the geese were in the field and had just taken off flying when I grabbed for the camera and turned it on. Spencer had no problem ignoring the squawking geese.

This clip shows how both Spencer and Bruno act in the morning and when they are being fed. They are calm, relaxed, happy and respectful. It's not normal for dogs to be hyper and tense, although unfortunately due to the way dogs are not getting their instincts met, most dogs in the USA and abroad are not balanced. If we humans want to keep an animal captive we have an obligation to give them what they instinctually need as the animal that they are.

This is what Spencer often does when someone comes to see him. He gets one of his bones or toys and brings the object to the person. Notice the way he turns in a circle? That is a submissive gesture. He is calm and happy and he would never dream of jumping up on someone. This is another example of what a dog looks like when you achieve balance. He is excited, but not to the point where he is going to give himself a headache.