Raising a Puppy: The Ninth Week in his New Home—Spencer the Blue-Nose Brindle Pit Bull

A day in the life with Spencer the American Pit Bull Terrier puppy. Spencer's ninth week—18 weeks old, 41 pounds, 18 1/8th inches from the ground to the highest point of the shoulders (the withers). 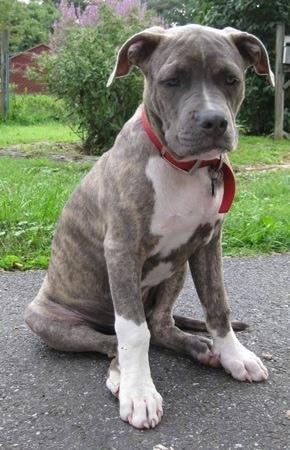 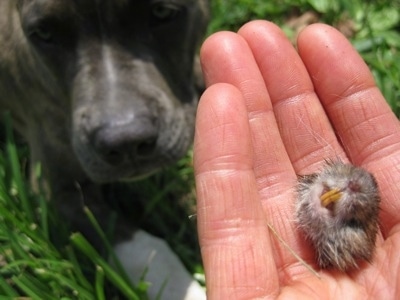 Spence, what's in your mouth? Give me that. I reach into his mouth and pull out this! A mouse head. Why, why, why Spence?! Why must you make me touch this stuff?! The cats apparently ate all of the mouse except for the head and they left the head laying around for Spencer to find. I just don't recall Bruno finding this many dead animals. Your nose has got to be much better than his. 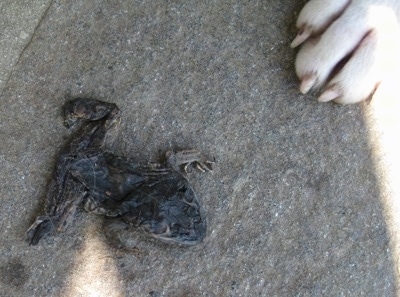 Another dried-up dead frog. Spence, in hindsight Bruno's old puppy obsession with trying to eat cigarette butts is nothing compared to your wanting to eat dead things. I would much rather be pulling a butt out of your mouth than a dead animal! 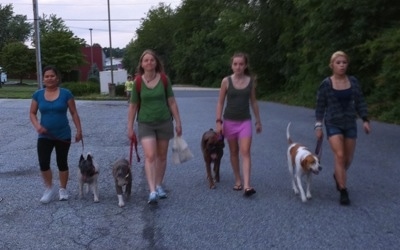 A couple of days a week we get together with friends for a pack walk. We extend the invite to those who have dogs that heel on a leash and sometimes have a nice sized group going. The reason why we only extend it to owners who make their dogs heel is because dogs that walk in front of the person holding the leash regard themselves as the leader of the walk, the one who decides, and therefore it will affect our own dogs’ behavior to have a dog that is above them in the order. Since all of our dogs heel while walking they see themselves as equals and as a result there are no scuffles between them. No dog is trying to lead another and when we pass other dogs it is easy to keep walking without our dogs reacting.

It's very rare for people to see a group of dogs heeling on a leash, walking politely even by barking dogs. We are often asked if we are a group, program or some kind of club or if we walk dogs for a living because they want to hire us to walk their dogs. We tell everyone we are just dog owners. If you think about it, it's kind of sad: the amount of dogs we pass barking from behind the fence compared to how many we see being walked. The majority of dogs we do see being walked are pulling in front of their owners and barking at us as they walk by. It is extremely rare we actually see a dog heeling and not reacting to our dogs. How nice it would be if people were not so surprised to see a dog behaving, but rather surprised to see a dog misbehaving. If only more people practiced natural dogmanship the world of dogs would be a balanced place.

Manners at the Vet 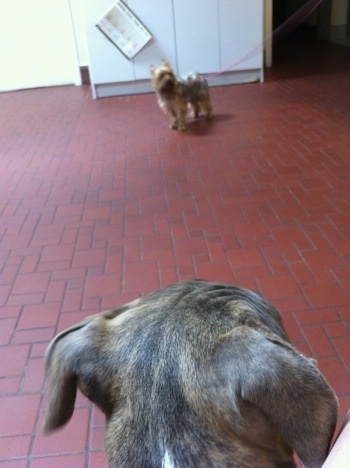 Spencer had a vet appointment for the last of his shots. The pup does not even flinch when the needle goes in. That's the high pain tolerance of the Pitbull in him. In the waiting room I had to remind him to have manners and sit quietly when other dogs were in view, even if the other dogs were not calm. Spence is very good and it only took a minimal correction to remind him of his manners. A small tug on the lead, a "shhhhh" sound and holding my hand in front of him like a stop sign was enough to get him back into the calm zone while other dogs were reacting.

Spencer seems much more sensitive to new things, especially noises, than Bruno ever was. It's a little insecurity that I have noticed in him since day one when he did not want to walk on the hard flooring inside the house. We have to be very careful not to nurture this in him, but rather make him stronger minded. Sometimes it's not always easy as it's due to other humans reacting to him.

For example, at the vet he started becoming unsure about being up on the table after getting his anal glands checked. I mean who wouldn't, right? Spencer's tail went between his legs which indicated that he was very unsure at the moment. I knew this meant we had to not give him any type of affection until he gathered his wits and realized everything was going to be OK. However, the vet tech noticed he was not so sure and sweet-talked him. Sure, his tail wagged at her, but then he started to shake up on the table. Without realizing it, the vet tech just told him he was a good boy for being unsure, instead of telling him there was nothing to be afraid of. However a dog is feeling at the time you give them affection (including sweet words) is the feeling you are encouraging. Spencer was just encouraged to be afraid. 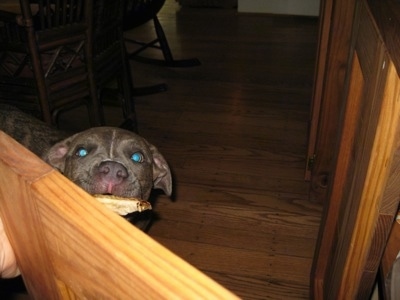 At home I deal with his sensitivity by associating something positive with the noise he is unsure about. I am careful not to sweet-talk or pet him. I stay calm and quiet. For example, I had just gotten something out of the cabinet. When the cabinet door slammed shut Spencer jumped and ran away from the area. I gently but firmly told him to come back. When he did I had him sit down and made cabinet noises, not as loud as the one that freaked him out but it was the same sound. Spencer had tried to walk away a few times but I gently blocked him and told him to stay. I started letting him smell things inside the cabinet while making cabinet noises. I took one item out at a time and held it for him to smell. I did not want to teach him to nose in the cabinet on his own so I was careful to be the one showing. He started to lighten up as he started to become more interested in the new smell of the items and less on the noise, while I was staying careful not to talk to him in a sweet way but a matter-of-fact, calm but firm way. Then I held a chewy bone out for him while I made cabinet noises. Spencer started to totally ignore the sound of the cabinet even when the noises got louder and was chewing his bone while I was holding it. Suddenly the cabinet was no big deal to him. Had I given him love or affection while he was freaked out about the cabinet I would have been telling him good boy for being afraid. Instead I first showed him the cabinet, showed him what was in it, and then associated the noise of the cabinet with a chewy bone. 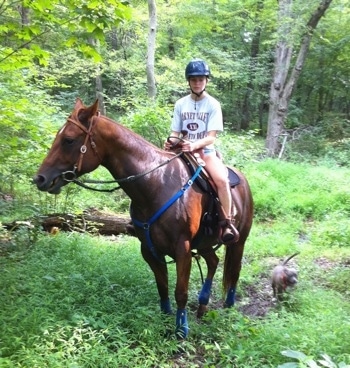 Spencer goes on a hike with Amie and the horse. Spence seemed pretty aware that you don't walk too close to the horse, but Amie had to be very careful too. 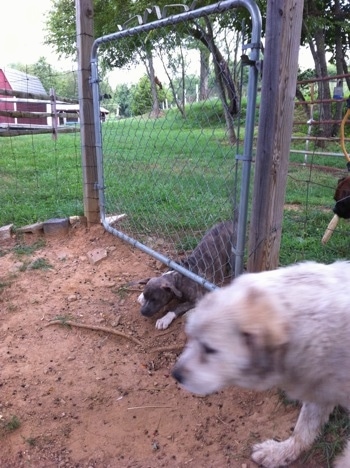 Spencer has been making it a habit to crawl under the back fence to visit the Great Pyrenees. 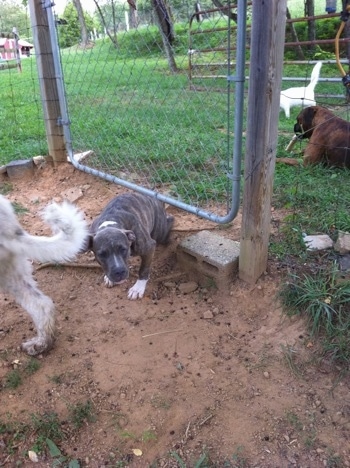 He's only going to be able to do this for about another week or so, I predict. 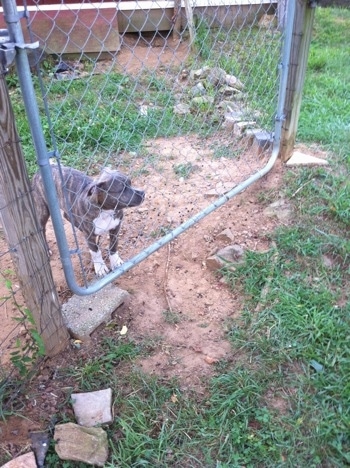 Spence used to be able to come back and forth with no problem at all, but now he can't seem to get back once he gets in. Going in is down a slight hill, but coming back is up the hill. I had to open the gate and let him back out. 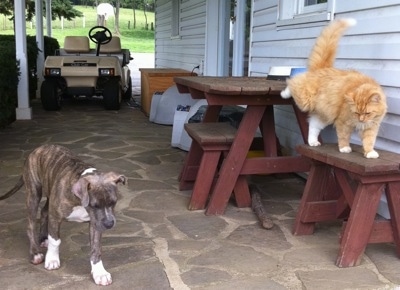 Oh my gosh! I caught Spence up on the table eating cat food! I don't know who moved that bench out to make it so easy for him. I know Pumpkin would not mind sharing his food with Spencer, but it's just not good for a puppy to eat cat food. Just like your big brother Bruno! 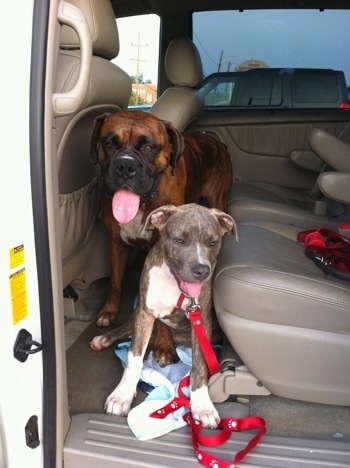 Just like Bruno, Spencer has learned that just because the car door opens it is not an invitation to jump out. Snapping the leash on is not an invitation to jump out either. You wait for the command or gesture from the human in charge. I keep a very close eye on him and even on Bruno knowing that they could jump out at any time, however lately Spencer does not even try and jump out unless I say he can. He watches me and waits. That innocent face was just chewing on that innocent sneaker! One verbal correction was enough to relay the message that I didn't want him to chew on it. I am able to tell my corrections are enough without being too intense by his reaction. It's enough because he stopped chewing, and it was not too much because he is not afraid or unsure after the correction. I never correct him out of anger. It's just calm and firm. Correcting a dog out of anger is a big no-no. Spence, we don't pull the wires out from behind the computer. Good thing I was here to see you and tell you no. Your daddy would not have been a happy camper! I believe I recall your brother Bruno doing this very same thing when he was just a kid pup too! 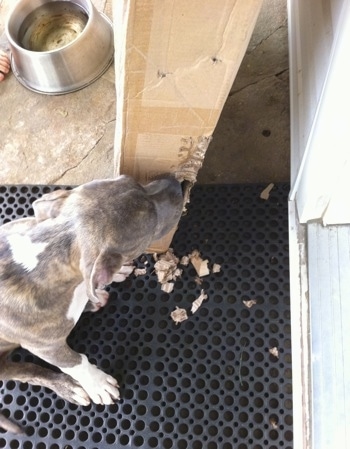 Excuse me Spence, but that UPS guy didn't put that box there so you could chew on it like your very own huge bone. "Leave it!" Time to move the box out of reach.